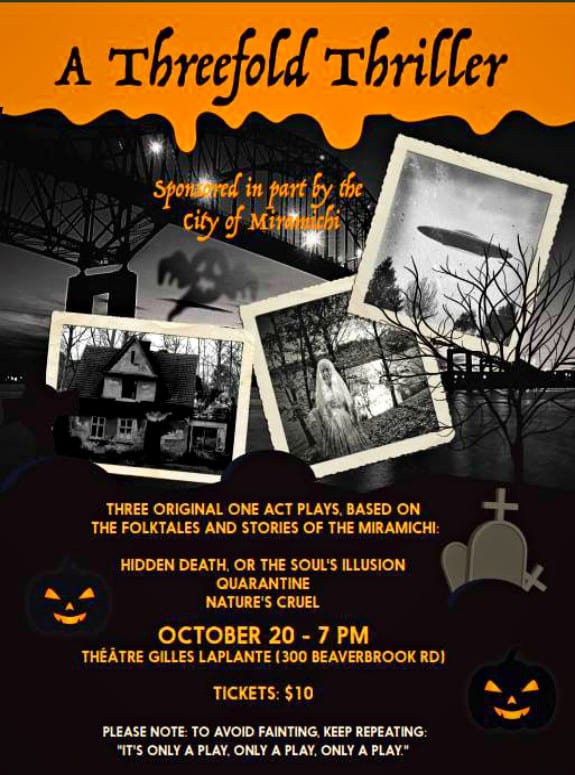 Sponsored in part by the City of Miramichi, Come out to the Théâtre Gilles LaPlante at the Le Centre Scolaire Communautaire École Carrefour Beausoleil located at 300 Beaverbrook Road in the former Town of Newcastle (Miramichi West) beginning at 7:00 pm on Saturday, October 20th, 2018 for A Threefold Thriller: Three Original One Act Plays based on the Folktales and Stories of the Miramichi.

Hidden Death, Or The Soul’s Illusion

In a tale from the NW Miramichi, the restless spirit of a girl tempts a man with a crock filled with coins, if he’ll exhume her body and place it in sanctified ground.

Are the hauntings, and money, real, or are they simply the product of an overactive mind?

Ripped from the headlines, several UFOs are spotted on the Miramichi in 1947.

Now, two of those who bore witness are compelled by circumstance to tell what they know, but are they both all that they seem?

In a retelling of a Boiestown narrative of foul play in the woods of the SW Miramichi, two men are brutally attacked by an unknown assailant.

Some time later, two women, on an excursion of their own, encounter a stranger, whose manner raises sympathy, and suspicion, in equal measure.