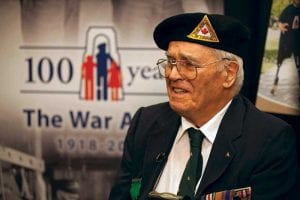 On November 11, Second World War veteran Charlie Jefferson will not only be thinking of all those who have served and continue to serve on behalf of Canada, he will also be reflecting on the 100th anniversary of The War Amps, an organization which has supported him and generations of amputees.

In March 1945, Jefferson was serving as a Lieutenant with the Queen’s Own Rifles Regiment in the Rhine Valley, Germany.

He was injured by an anti-personnel mine explosion, resulting in the loss of his left leg below the knee.

When he returned to Canada, he was greeted by a war amputee veteran who reassured him that living with an amputation would not be a barrier to a successful life and that The War Amps would be there to support him.

The War Amps was started in 1918 by amputee veterans returning from the First World War to help each other in adapting to their new reality as amputees.

They then welcomed amputee veterans following the Second World War, like Jefferson, sharing all that they had learned, as well as starting the Key Tag Service to allow these new members to gain meaningful employment and provide a service to the public.

Jefferson says that he gained practical advice from fellow amputee veterans, like how to protect the skin on his stump from blisters. He adds that the moral support he received was just as important because it made him feel like he was not alone. “It became easier to accept your amputation and helped make the most of what you’ve got left,” says Jefferson. 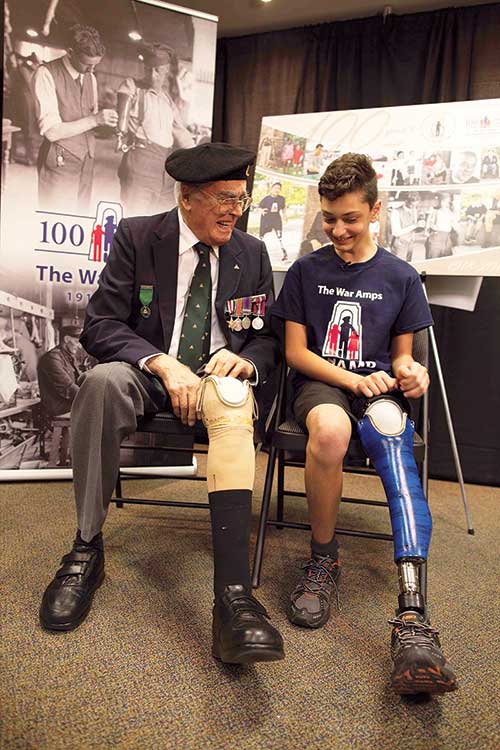 Charlie Jefferson passes down the advice he learned from fellow amputee veterans to members of The War Amps Child Amputee (CHAMP) Program.

Over the years, he “paid it forward” by visiting new amputees in hospitals and at their homes to provide the same guidance that he had been given. “I would tell them what success I had and what was working for me, so there was a comradery and information transfer,” he says.

This peer support was then passed on to a new generation.

In 1975, war amputee veterans recognized that their knowledge and experience could help others so they started The War Amps Child Amputee (CHAMP) Program, which provides financial assistance for the cost of artificial limbs and regional seminars to young amputees.

Rob Larman, Director of The War Amps PLAYSAFE/DRIVESAFE Program, lost his right leg in a train accident at the age of 14 and grew up with the CHAMP Program. “On Remembrance Day, I think of the incredible legacy these First and Second World War ‘amps’, like Mr. Jefferson, have created for all amputees in this country,” says Larman. “I’m proud to, in turn, help the younger amputees who have come after me.”

When war amputee veterans started The War Amps, they could not have predicted that their founding principle of “amputees helping amputees” would still be going strong 100 years later. Thanks to the public’s continuing support of the Key Tag Service. The War Amps vital programs for amputees across Canada will carry on long into its second century.