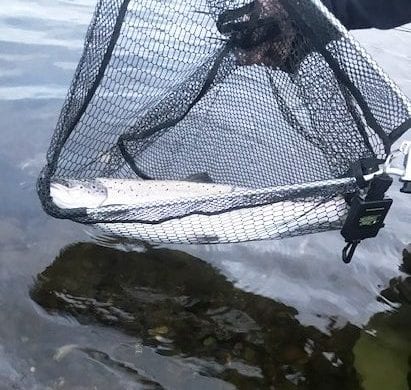 Fresh as a daisy…caught near the mouth of the SW Miramichi by Steve Smith on a dry fly. Note the digital scale attached to the net.

Over the last week there has been more or less a cessation of Atlantic salmon angling on at least the lower end of the Miramichi.  The water hasn’t been under 70 day or night for about a week.  At least we haven’t had any of the super scorching mid 30C weather that some years bring.  This Tuesday morning a big bunch of rain ran right straight down the SW Miramichi River valley leaving more than an inch and a half of rain.  It nearly all missed the Cains though.  It was very focused and brought the river up an immediate four inches or so, about half of which it has since backed off from.  A modest raise may start this evening.  As I wrote this the area was under a severe thunderstorm watch for the afternoon, but it ended up fizzling out.   This is good news for the many salmon that are now holding in the various cold water pools throughout the river.

The transient nature of the salmon in the warm river is illustrated by Byron Coughlin of Country Haven Lodge driving out to his Cains River camp and stopping for a look over the Upper Blackville bridge.  Below him in the shadow of the bridge were at least 40 salmon and grilse.  The next day they were all gone, presumably to some cold water buffered pool.

The most recent fishing that I know of first hand was on last Saturday morning the 25th done by Jason Curtis and an old client of his.  They fished a good low-water pool in Blackville, and even though the water was 22C/71F they found a lot of salmon were present, and got a fat grilse in spite of the warm water.  Jason also said that he is still seeing schools of salmon passing up the river. 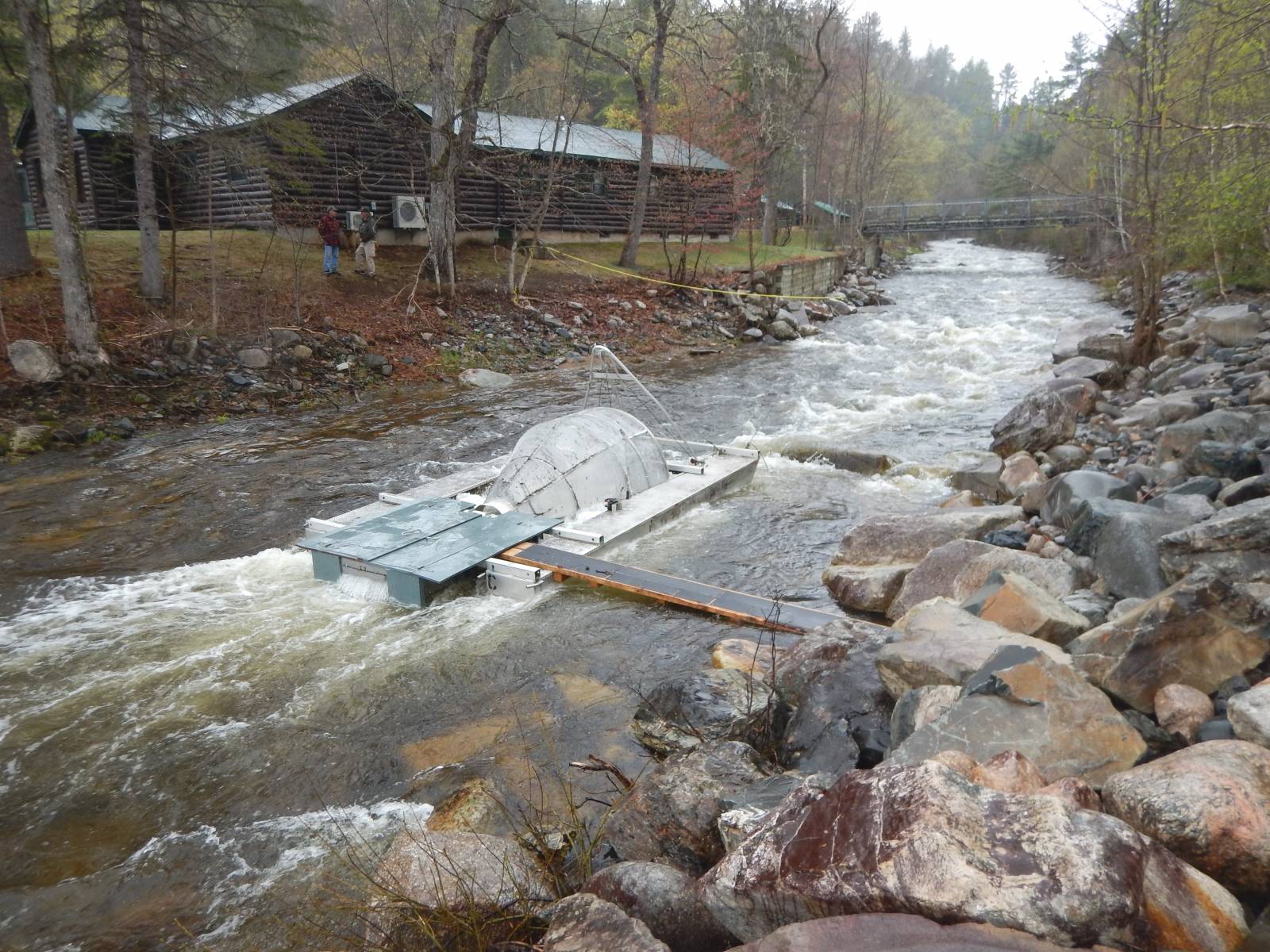 Smolt wheel in Rocky Brook in May.

Wayne O’Donnell, manager of Rocky Brook, International Paper Company’s big lodge on the upper SW Miramichi reports that there are good numbers of fish holding in their water.  Wayne said that they have not been immune to the warm, low water, and that he has been restricting fishing to mornings, and occasionally very late in the evening.  In spite of the large number of fish in their pools the salmon have not been moving up into Rocky Brook itself, but he feels the warm and low water is the reason.  Yesterday’s big rain may start to change things.

The barrier numbers from the Dungarvon and NW Miramichi through Sunday July 26th are in, and they continue to trend well ahead of last year.  The NWM in particular is well up with 192 salmon and grilse compared to 124 from 2019.  The biggest category of increase, surprisingly, is not grilse, but rather small salmon.  These would primarily be the female component of last year’s grilse run. Between the two barriers these are up from 55 in 2019 to 119 this year – almost a 100% increase.  This is really great news because these are important spawners, and this may be showing better ocean survival for young fish over the last couple of winters.

You’ll also note water temps in the lower right quadrant on the two barrier graphics.  This shows how important these cooler flow areas are to the health of the fish.  This is the hottest time of the year, and though day time temperatures can get up into the high 20Cs or near 80F, they drop off nightly to around 15C or approximately 60F.  The MSA’s Mark Hambrook says that the important thing in salmon warm weather survival is that the temps don’t remain constantly high.  If the temps cool off overnight the salmon can survive it.  These nightly lows up in the Dungarvon and NW Miramichi average a good 7C or 12F lower than temps taken during the same time in the Doaktown area of the SW Miramichi where the gauge is located. 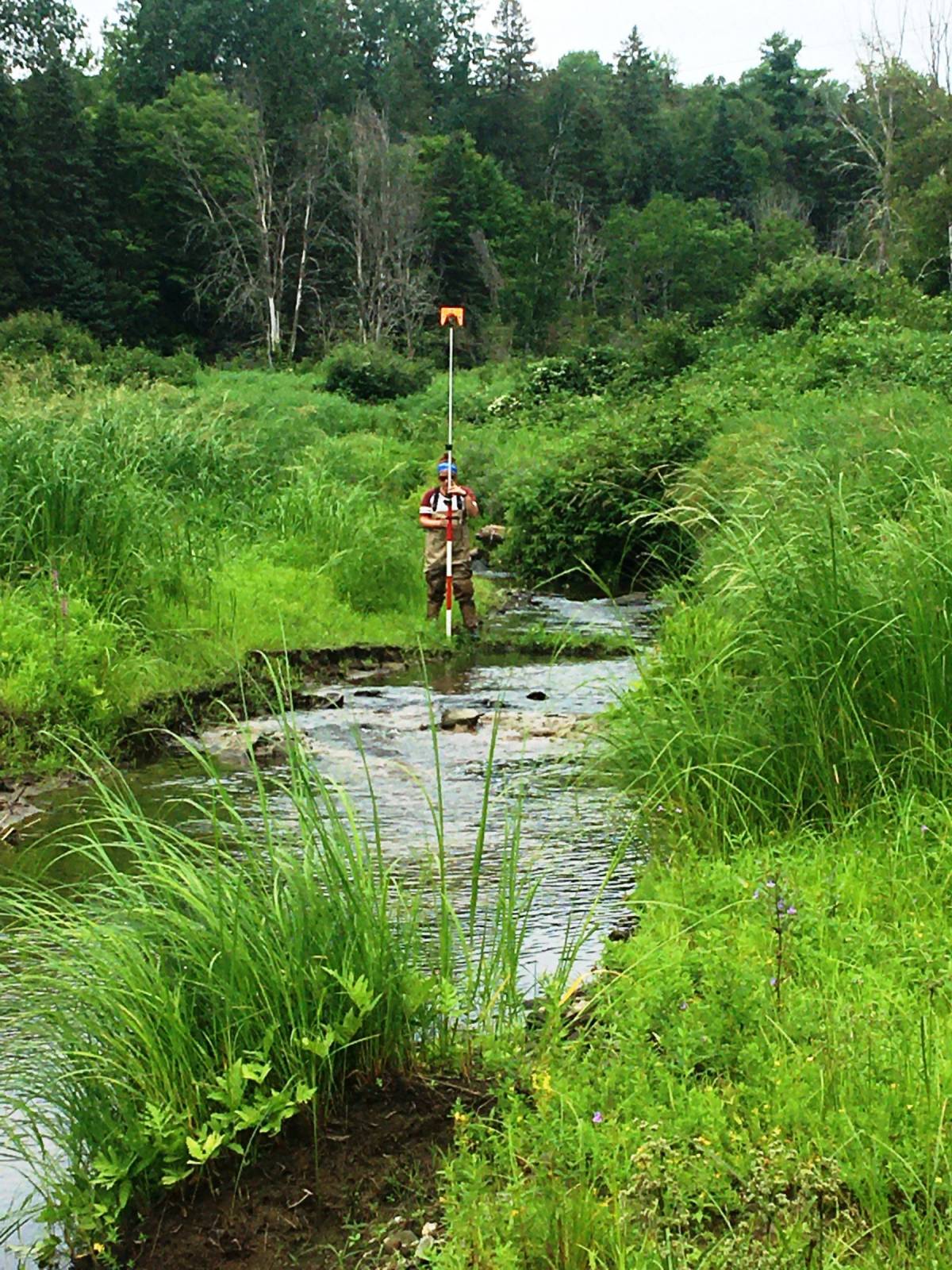 Taking an elevation inside McKenzie Brook

Since 2014 the Miramichi Salmon Association “MSA” and various partners have been doing cold water enhancement upgrades on various brooks running into primarily the SW Miramichi which is the warmer of the branches.  The brook mouths can become shallow and obstructed over time.  The water that should flow cool and strong out into the main river flow is warmed before it can find its way out into water deep enough to offer sanctuary for salmon.  Each situation is analyzed, equipment is brought in, and the brook channel is deepened and redefined to provide optimum cooling from the flow.  Rocks may be located to provide protection and shade for salmon holding in the cooler water.

This summer one of the brooks picked for work was McKenzie Brook in Blackville.  McKenzie is not a huge brook, but in warm weather it can hold a significant number of fish.  This past week the site was surveyed for the information needed to come up with an enhancement plan that will be constructed this September. 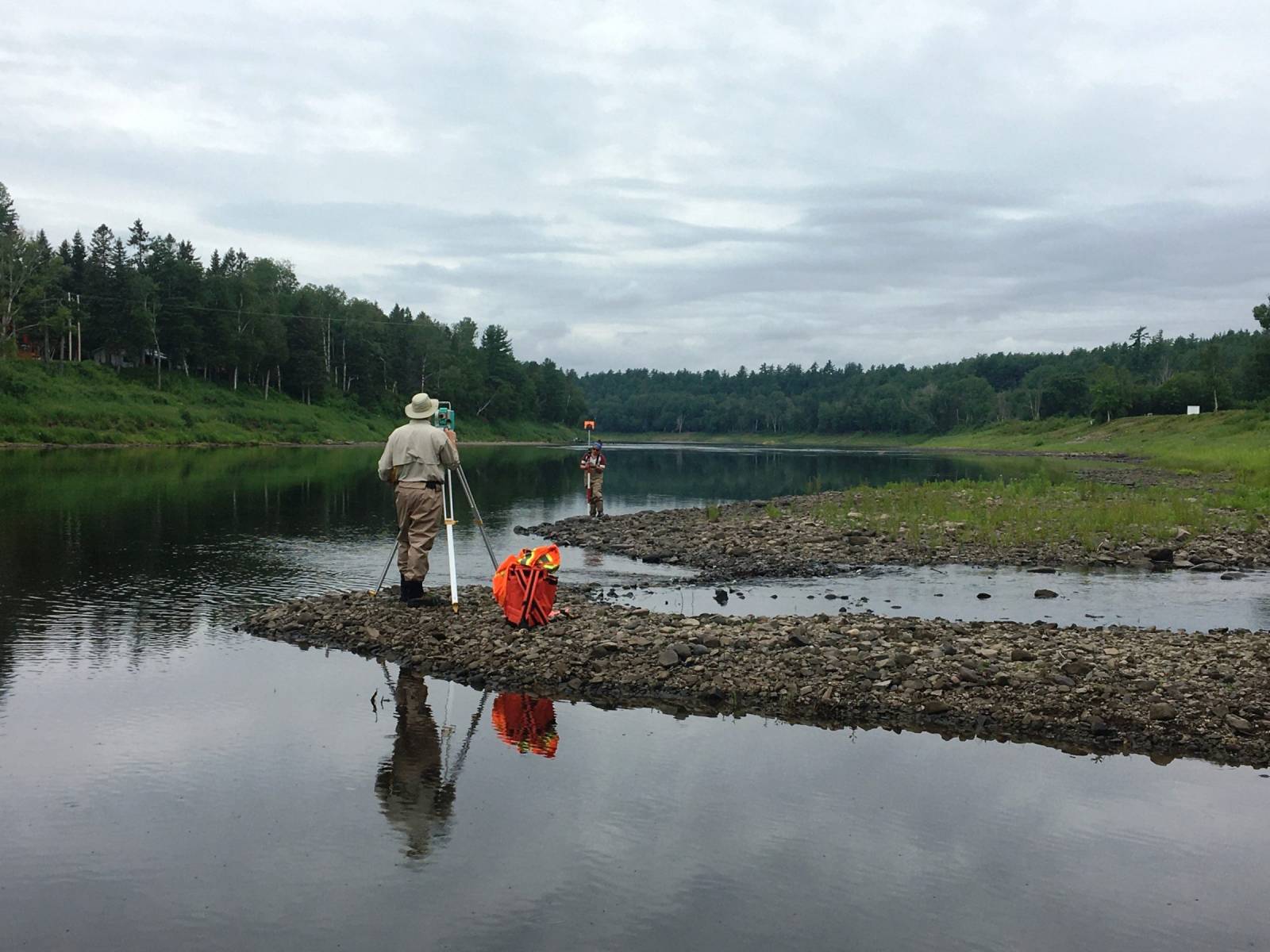 Looking down the Miramichi from the mouth of McKenzie Brook. Jason Curtis photos of the brook scenes.

This link will take you to before and after pictures of a number of brooks that the MSA has worked on in recent years.  This sort of grass roots work is one of the biggest reasons that all Miramichi salmon fishers should belong to the MSA.  You can become a member at this link.

CAST or the Coalition for Atlantic Salmon Tomorrow continues to work on cutting edge solutions to the difficulties faced by Atlantic salmon.  Recently their executive director Andrew Willett posted information about CAST’s involvement with the Ocean Aware Project.  Here is a link where you can read about it.  If you scroll down a bit there is a video of Tomi Linnansarri Phd talking about new salmon tracking technology that will come from this alliance.

In another day or so it will be August.  My old friend John Cole used to say that Maine was never really hot after the 10th of August.  That isn’t really true, at least it isn’t true anymore, but definitely things do begin to change.  The ripening of things in the garden, color in the apples on the trees, and the arrival of salmon with the first colorings of fall all usher in my very favorite time of the year.  This summer’s run of salmon seems to be better than any since 2011, though we have no means to make exact measurements.  Being an American I have to go by what I am hearing including the testimony of some very trusted observers.  2010 – another solid year – and 2011 both had very good fall runs.  Let us hope that will be the case in 2020.

New Brunswick Salmon Lodge for Sale at junction with the Restigouche.

The lodge is Mill Brook on the Upsalquitch.  I know a little bit about this lodge, and stayed there once.  I understand, though, that under its current ownership it has been improved well beyond its condition when I was there about 20 years ago – and I thought it was very nice then. I don’t know its long-term history, but I’m sure it is quite a story.  Someone very carefully put together a lot of parcels of property in the lower section of the river right up to and including the junction pool where the Upsalquitch flows into the Restigouche.  This is rare and excellent fishing water.  This lodge joins other famous lodges on the Upsalquitch including Two Brooks, long owned by the Cullman family, and Boland Brook Lodge, the subject of an excellent small book a few years ago.

I first heard of this lodge back in the 1980s when Joe Sewall, a successful Maine businessman, president of the Maine Senate, and a true gentleman owned the lodge.  He used to invite my friend and striped bass fishing companion the late John Cole, author of books like Striper and Fishing Came First to fish with him during July every year.  They were good friends.  John Cole had been the founder of the Maine Times – quite a successful small newspaper in its day – that John finally sold to the globe circumnavigating sailor Dodge Morgan.   The irascible John Cole used to come back from the Mill Brook Lodge trips all excited about Atlantic salmon fishing, but also complaining about the snooty republicans with their Bogdan reels that Joe filled the place with.   It was funny to listen to really, because John himself was from an upper crusty NY background, and he enjoyed all the trappings of affluence – he was just a bit of a rebel,, and a very entertaining one at that.  One time we were on a trip together and were a little deep into the cocktails.  I was getting a few laughs from the other guests when John put his hand on my shoulder and said loudly, “Don’t be stealing my my roll Brad, I’m supposed to be the camp buffoon.”

I have no commission or other interest of any kind in this sale, but I’m proud to help let people know about such a fine property.  I can’t tell anyone what they should pay for their salmon fishing, but the $885K price tag on this lodge is in CA currency, so it amounts to about $664K USD.  If you are in a position to even consider such a purchase check out the brochure at this link https://bit.ly/CBREFishingLodge.  There is a terrific lodge, 174 acres of land, two miles of private shore line, a number of named salmon fishing pools, and a priceless history, tradition, and lifestyle for the owner that has historically made places like this highly desirable.

The brochure has all the photos and information that you will want, but I had to include the one that I have attached here.  This photo was taken by me in August from Camp Harmony on the Restigouche.  You can see in the photo the junction of the Restigouche River and the Upsalquitch which comes in from the right.  Quite a spot for sure.