We are up to our neck in ripe tomatoes, eating our first garden corn, and  I needed to put on a jacket to have my first cup of coffee outdoors a day or two ago.  This is that wonderful time of the year when it is still summer, but the first feelings of fall are in the air, and the worst of summer’s heat is behind us.

The temperature gauge on the Miramichi at Doaktown is 7/C/45F and has been steadily declining all week, and yesterday, 8/21, was the first day since the middle of June when the water temperature failed to rise to 20C/68F all day long.

The upcoming week is also forecast to be somewhat below normal in terms of both daily highs and lows.  It sure looks like water temperature will not be a problem again for the rest of the season. The DFO agrees too since last week the morning only fishing restriction was lifted, and as of yesterday all of the cold water pools that have been closed most of the summer were opened again.

The only element we are lacking now is a raise of water, and outside of a few showers here and there no rain to speak of is forecast.  The level is currently at .38 meters in Blackville, and that is in record low territory.  Only once before, during the fall of 2018, have I seen it that low. 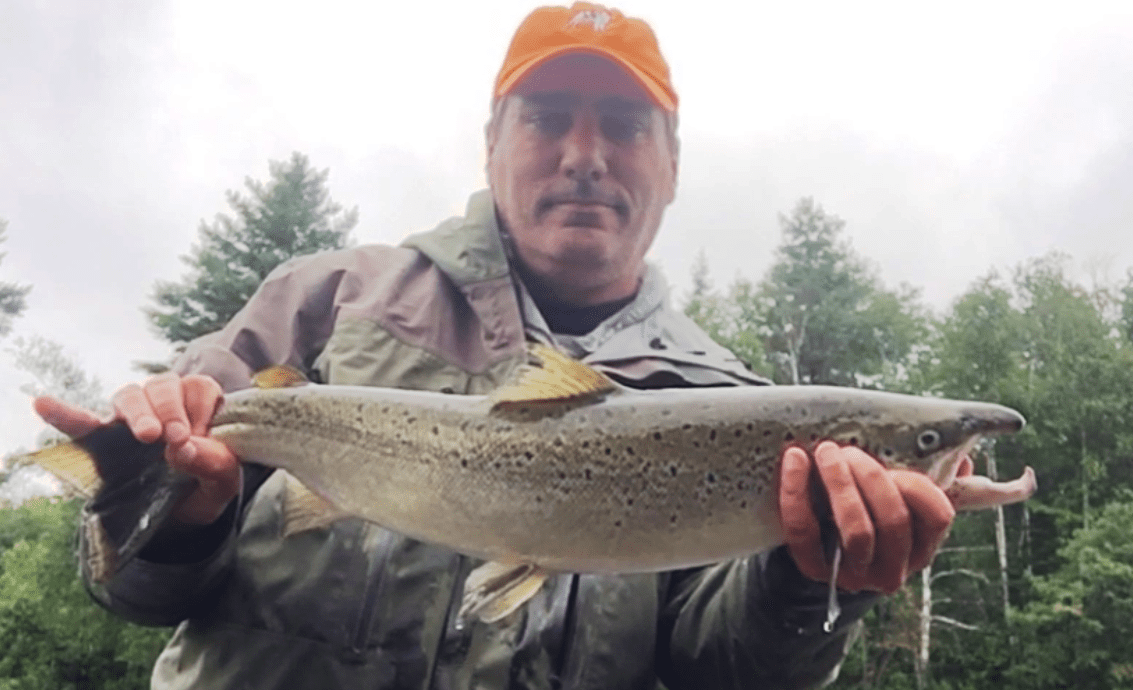 To celebrate the cool temps and the showery day yesterday in Blackville, Jason Curtis fished our best low water pool for the first time in over a month.  He was very amply rewarded by hooking 6 salmon/grilse on bombers, and he landed two including a nice cock salmon of about 8 pounds.

Jason observed that the fish were all colored, and had probably been holding at a brook-fed pool lower down in the river and were just now resuming their run up the river.  He said that he also saw another school of salmon make it through the glassy water above Campbell’s Pool earlier in the day.  The fish Jason is holding in the photo certainly appears to be in lovely condition.

An armchair salmon season – An armchair and a computer are as close as most Americans are going to get to Canadian salmon fishing this summer.   The government has moved off the date of cross border traffic to September 25th, and privately I hear there is little chance that date in turn won’t be pushed off yet another month as things get closer.  New Brunswick has done a good job of keeping Covid down, and they want to keep it that way.  It is hard to argue with, especially when you compare the numbers in the Maritime Provinces to those in states south of us.  I’m fishing in the ocean here in Maine, still hoping against hope for a little late season action, and fishing vicariously through reports from the river. I know the pools so well that I can see them in my mind’s eye, I can look at the weather and water height on the computer and feel myself standing in the Miramichi and fishing in those conditions.  I can see the salmon rolling and jumping on their way up the river, see the boil on the surface, and feel the line  tighten, then rip from the reel as a good salmon takes hold of the fly.  Yup, that’s where my salmon fix is going to have to come from for 2020!

A pre-Covid Miramichi fishing scene from the great year 2011.

Recent runs into the river have been typical of warm summer weather.  Two weeks ago only a single large salmon and no smaller salmon and no grilse made it up to the Dungarvon Barrier.  Those numbers improved a little for the week ended 8/16, but they were entirely made up of grilse without a single mature salmon venturing up these tributaries from the estuary.  Dungarvon had 6 while the NW branch had 4.

Both branches are ahead of last year, though surprisingly the number grilse in the NW Miramichi is down year on year.  All evidence suggests that the 2020 grilse run is very good by recent standards, but that doesn’t mean that this particular segment of the run will reflect that.  Unfortunately, without the Millerton and Cassilis traps installed this year we will never have a really good counting of this season’s run.  Still we will be picking up a lot of reports on the autumn fishing, and based on the apparently robust early run we are optimistic.

I follow Scottish salmon fishing quite closely with Covid causing me to miss my first March fishing there since 2006 when I started going over.  Most of Scotland’s rivers have also seen a strong run in 2020 with the best grilse runs in a long time.  In my book this is further proof that the main problem the Miramichi salmon run faces is in the ocean, and it wouldn’t take a huge change to return to times of much better abundance.

David Donahue used to own the hardware store in Blackville.  He grew up on the river in sight of Doctor’s Island, and his father Earl guided there for many years, working hand-in-hand with the original owner and founder of Doctor’s Island Paul O’Haire.  One day a few years ago I was in the canoe with Jason Curtis and David Donahue drifting through the channel looking over the pool.  Slow it down Jason, said David, it has to be right here, and then finally there it is… pointing to a big grey rock.  My dad and Paul O’Haire put that rock there; it holds a lot of salmon.  You can’t beat that kind of local, historical knowledge!

In the last few years David has been operating a bed and breakfast on the island.  Davids got a great facebook page with some terrific pictures of the island, the cottages, and the area.  He has been painstakingly restoring the cottages, and they do look terrific.  The big lodge, which is in many ways exactly what you would think an authentic Miramichi sporting lodge should be, with a huge fireplace, open beam interior, and incredible views, has been in serious need of some restoration too, and this summer Dave has been tackling that – and making some very good progress. 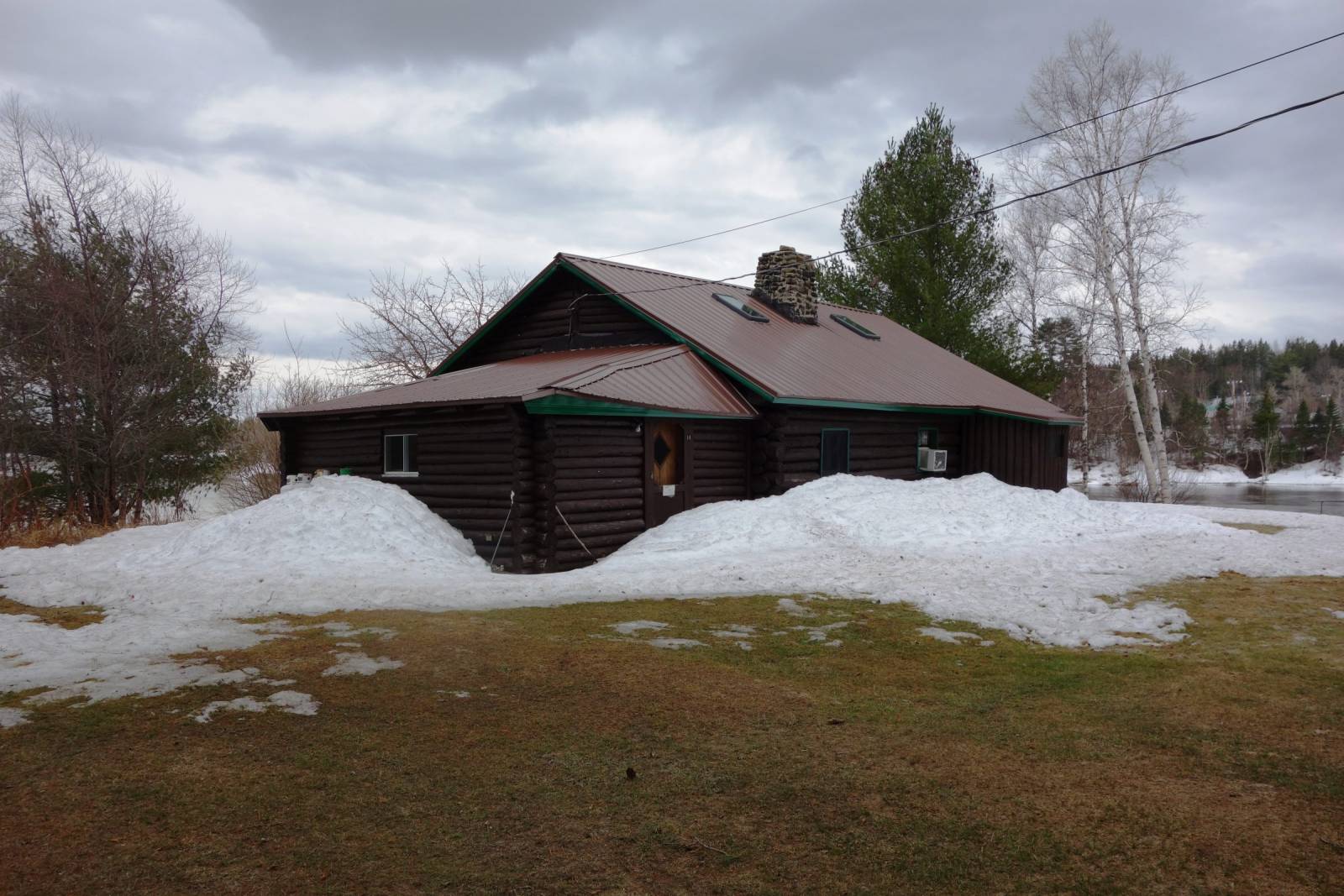 An early spring picture of the Doctor’s Island lodge. 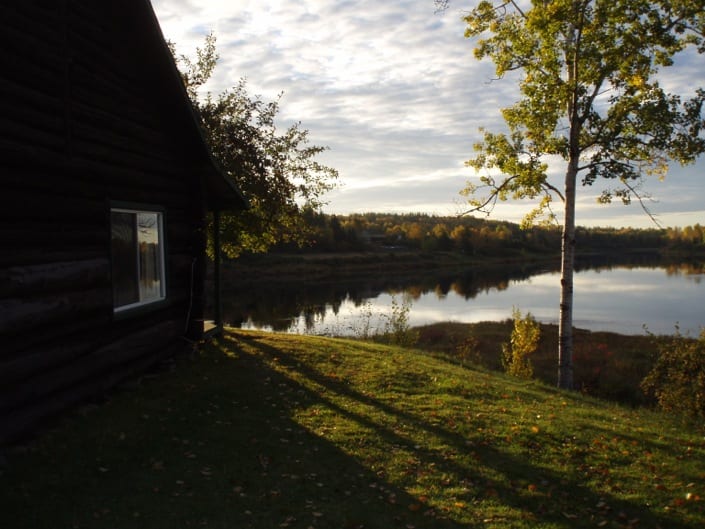 An evening upriver view taken walking around the lodge for dinner as club members and guests did for nearly 80 years. 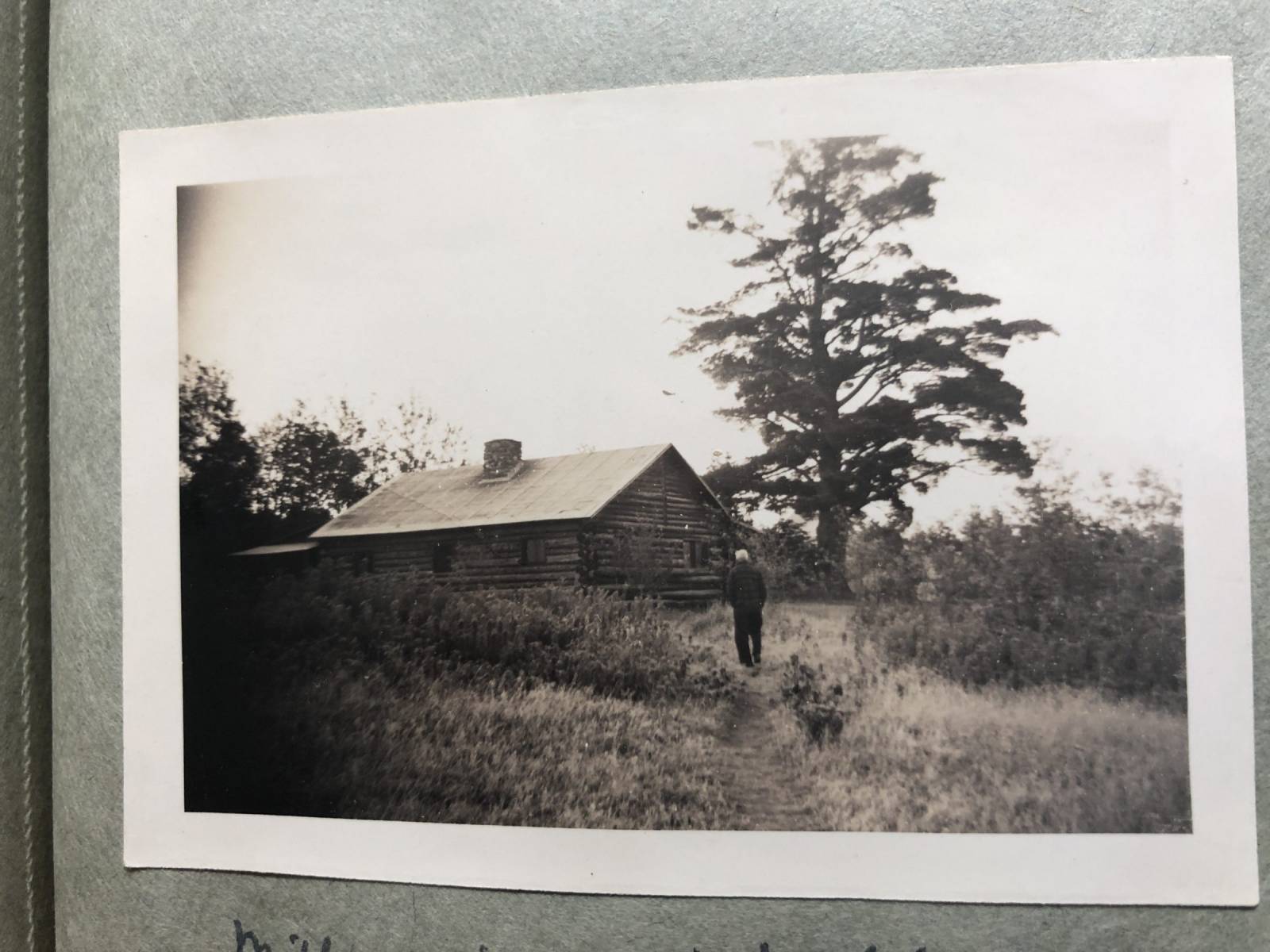 Sport walking over to the old lodge circa 1949.

Recently Gary Tanner – well-known sporting event auctioneer, past executive director of the American Museum of Fly Fishing, as well as the owner of many other important accomplishments in the world of outdoor sport including a PhD in wildlife biology, sent a review to Amazon after reading my latest book On the Cains: Atlantic Salmon and Sea-Run Brook Trout on the Miramichi’s Greatest Tributary.    I was really honored with his comment and thought I’d share it with you: “I have only seen one other book that even comes close to it in its historical class, and that is John Merwin’s The Battenkill. On the Cains eclipses even that great book in importance to the sport of fly fishing.”  I knew Merwin who had editorial positions at Fly Rod and Reel, Fly Fisherman, and Field and Stream.  It is truly a great compliment to have someone put my name next to his.

All eyes will now be on the fall run.  I’ll report back with as much information and many photographs as I can uncover on how the fall unfolds.  Thanks for reading.  Brad Burns

PS  If you are reading this blog because someone told you about it, you can subscribe yourself at no cost.   The link on my website is currently down, but just send me an e-mail at and I’ll enter you manually.

The post On the Cusp appeared first on Brad Burns Fishing.