Skip to content
Connect with us:
FacebookTwitterInstagram
October 4, 2005/Giv'er Miramichi/Be the first to comment/General Interest 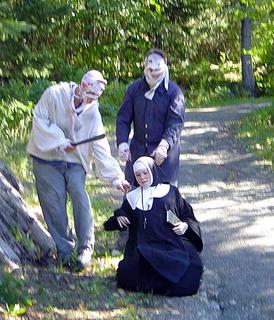 Headless Nun Film
Well, my 10 seconds of fame have been reduced to 2 seconds. I showed up at French Fort Cove on Sunday at 4pm to do my part. If anyone has ever been involved in a film production, of any size, you’ll know that running 4 hours behind is not unusual.

So, I arrived to find the crew, the headed nun, and a couple of lepers eating subs and getting ready to go back to the Beaverbrook House for more shooting. I spoke with two young girls sitting on a bench…a hiker (Becky) and the headless nun (Rachel). One girl had been waiting since 10:30 am and she still hadn’t been in a scene.

Initially I had one of the few speaking parts, which is more of a narrator slash interviewee than a character part. But unfortunatley they didn’t have time to shoot all of those parts, and I was one who got cut. They tried to squeeze me in on Monday but by then the Headless 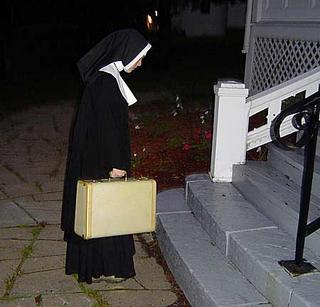 Nun filming was finished and the Dungarvon Whooper shooting was starting upriver so there just wasn’t time.

Around 9pm Sunday evening I was put into a scene with 2 hikers, one of which gets touched on the back of the head by the ghost of the headless nun. We all turn around, see the nun, look scared, back away and run. His hair turns white where she touched him, in the form of 3 finger prints. The effect was achieved by painting his hair with white-out.

To read more about the story of the Headless Nun, visit the French Fort Cove website http://www.FrenchFortCove.com. Although various versions of the Dungarvon Whooper story exists, you can read one here. Both of these stories can be found in Doug Underhill’s book, Miramichi Tales, tall & true.

Thanks to Dewey Gillespie and Doug Underhill, I was not bored in my time sitting around waiting. If yo u know these guys, you know what I mean. Dewey took pics all day and was kind enough to drop them off to me… 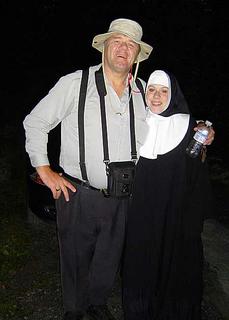 Dewey Gillespie and his daughter Tracey who plays Sister Marie Inconnu who goes down in history as the Headless Nun. Dewey plays a prospector looking for the gold.

For the rest of the pictures, please excuse the lack of detail. I’m not a reporter. I took down no names. I asked no questions, did no interviews. I have no sense of what is newsworthy…lol… All I have are these pics. So if you see your photo and I didn’t mention your name…sorry. Feel free to leave it in the comments below. 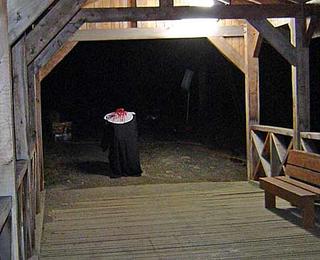 This shot creeped us all out. 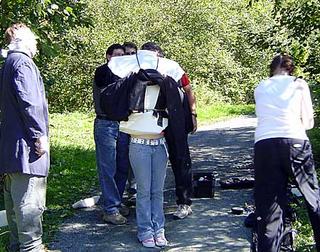 This is Rachel… being wrapped in foam and suited up for her role as the headless nun. Everyone felt sorry for her because it was sooo hot that day. It’s kind of ironic that I don’t have a picture of her face. The poor girl is in half the movie and we never get to see who she really is! I’ll have to find a picture of her somewhere… Rachel are you out there? Send us your picture! 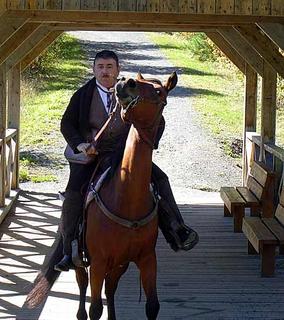 This is a horse pretending to be scared to cross the bridge, because of the nuns ghost. Good acting! 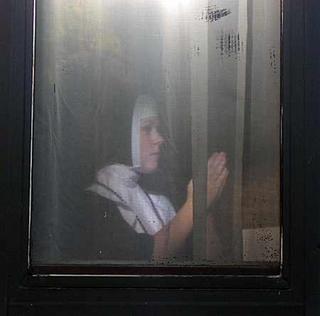 This is sort of a cool shot. It was taken from outside the Beaverbrook House where a light was shining through the sheer curtains to light the scene they were shooting inside. It was fun spying from the outside and taking pictures until I heard “Cut! Cut! Someone is in the background!” 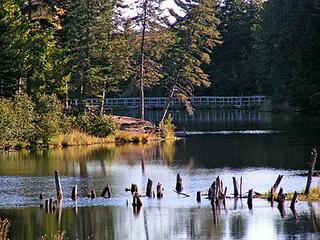