As we prepare to move into August, angling continues to be on the positive side. We’ve had tremendous runs of both grilse and salmon, water levels and temperatures have been very positive for the most part, and there are still decent numbers of fresh fish entering the system daily. The Cassilis counting fence on the Northwest was averaging less than 10 grilse and less than 10 salmon a day this past week, while Millerton on the Main Southwest was averaging30 grilse and 15 salmon daily.

W. W. Doak and Sons in Doaktown said angling had eased a bit from the spectacular we had in recent weeks, but still remains on the good side, especially for the time of year.  Water conditions are close to ideal, and most anglers are having some success.  Catches have been a mix of salmon and grilse, with more of the latter.

Flies of choice were White-tailed Green Machines, Black Bugs, Undertakers, Same-Thing-Murrays and Glitter Bears on nos. 6 & 8s in wet flies.  Many are switching to Bombers such as brown with orange hackle and white tails and other varieties.

Derek Munn of Ledges Inn in Doaktown and Mountain Channel in the Rapids area said angling had slowed somewhat, but they were still catching fish every day.  One pool at the Ledges produced four on Wednesday morning, while Mountain Channel counted six on Tuesday.  On Sunday they caught eight fish between three rods.  There was the odd salmon, but the majority of catches were grilse.  They had received an unexpected amount of rain on Wednesday, so he felt the river would rise a fair bit, but it had been both a good height and temperature on Wednesday.

Flies of choice were Christmas Trees (one angler limited out on this one) and Black Bugs on no. 8 hooks in wets, along with a variety of Bombers and Dry Flies.

Herb Barry Sr. of Herb’s Fly Shop on the Station Road in Blackville said angling there was only fair.  There were good numbers of fish around, but not taking well.  You had to really put the time in to be successful.  The only very good spot was the Cains River which was fishing well.  Herb decided to multi-task this past week.  While fishing, he also decided to take a bath as well, so if you see him heading to the river with a towel under his vest, you’ll know why.

Flies of choice were Shady Ladies, White-tailed Green Machines, Green Rats, Blue Charms and Same-Thing-Murrays on no. 6 with some 8sw in wets, and Killer Whiskers (my favourite with a blue butt).

Curtis Miramichi River Outfitting in Blackville said angling was still fairly good with some being caught, but not the numbers of the last two weeks.  There were good numbers around, but not as active as anglers might like.  They had received a small raise in water early in the week.  Catches were a good mix of salmon and grilse.  Canoeing conditions were perfect.

Flies of choice were White-tailed Green Machines, Undertakers, Blue Charms and Green Rats on nos. 6 & 8s in wets, along with a variety of Bombers.

George Routledge of George’s Fly Shop at the Mouth of Renous in Quarryville said angling was slow with only a few being caught.  He described fishing as average to good.  There had been a 4-inch raise in water, but heavy rain in the upper stretches Wednesday will bring the levels up over Thursday and Friday.  He felt the weekend should offer better angling.  There were more grilse than salmon. 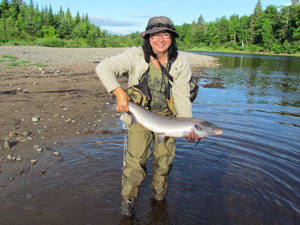 Aline Savoie caught this beauty on the Renous, July 23

Jim Laws of Miramichi Hunting and Fishing in Newcastle, Miramichi reported angling as still on the positive side, noting that we have had unbelievable runs in the recent weeks.  There were more grilse than salmon.  Water conditions were good, but a nice raise in water would help.

Flies of choice were White-tailed Green Machines and Shady Ladies along with a good selection of Bombers.

Syd Matchett of Trout Brook Fly Shop on the Northwest Miramichi said angling there was a bit quiet, with not a lot of new fish coming in.  However, the Crown Reserve stretches such as the Crawford and Depot were fishing well.  A good rain would liven things up again.

Debbie Norton of Upper Oxbow Outdoor Adventures on the Little Southwest Miramichi said they were having pretty good fishing.  Jimmy Laub of Kutztown, Pa. limited out on salmon on Tuesday, while there were a couple more caught by other anglers.  Bob and Malinda (of Malinda’s Fly Shop on Salmon River in Polaski, NY) also had good fishing.  The water level was good, but dropping and Tuesday’s water temperature was in the mid 60s Fahrenheit.

Flies of choice were Will Taylor Specials, and Green Rats.

So, with fresh fish still coming in daily and decent water conditions, take time to get out and “on the water”.  And don’t forget to try a “Carter’s Bug”.

Don’t forget to show your support for our sponsors, because without them, this column would not be possible. If you can’t get there yourself, send your friends! Tell them you appreciate their support of the column!

Ever dreamed of having your own cottage on the Miramichi? Now you can win one, but you have to hurry! Draw date is tomorrow, Friday July 29th. Or you could always take the $50,000 cash instead! Click here for details!

Thought for the Week: “If people concentrated on the really important things in life, there’d be a shortage of fishing poles.” ~Doug Larson

Humour: “Fishing is like sex, the more you do it the bigger stories you tell.” Anon. 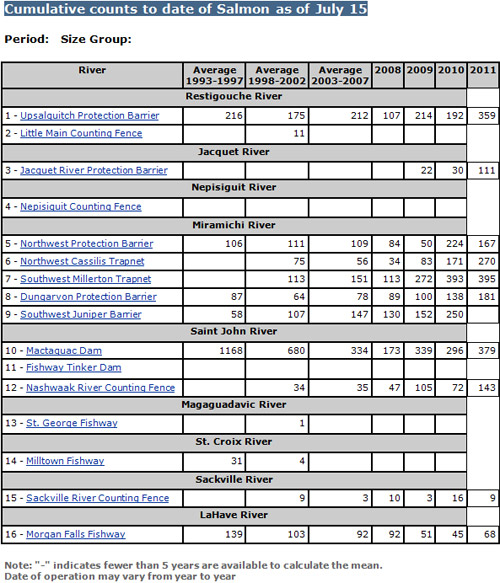 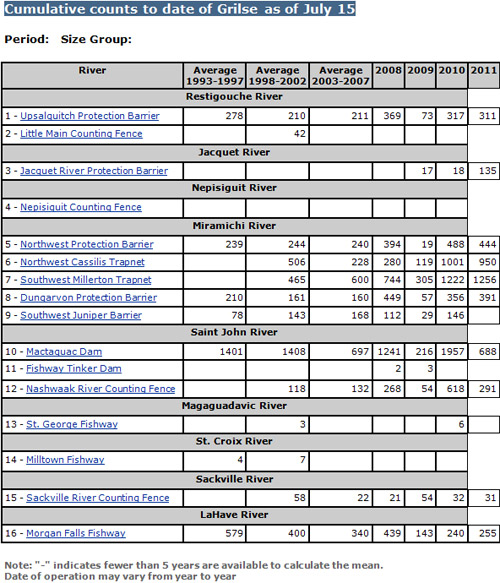