Angling has been moderate to good along the system.  The upper stretches of the Main Southwest received more rain than the lower stretches and wiped out fishing around Doaktown area this past weekend.  Gradually, rivers are dropping and angling is returning to normal. 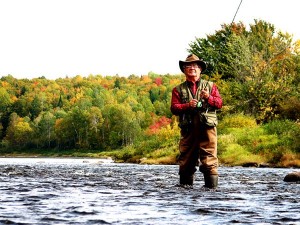 The trapnet at Cassilis is still averaging only one or two grilse a day and maybe one salmon, but the Millerton trapnet has shown an improvement during the past week.  There has been a bump in numbers, but no bumper crop of a fall run yet.  Monday saw Millerton produce 15 grilse and two salmon while Tuesday it had nine grilse and two salmon. Overall this past week there has been an average of 10 grilse and five salmon daily, so numbers are improving.

Today is the start of the annual three-day “Swamp-Donkey” hunt, otherwise known as “Moose Season”  in New Brunswick, so if you are out and about, particularly off the beaten tracks, be a little careful and wear some “Hunter Orange”, and don’t fish too many flies tied with moose-hair or an eagle-eye shot might just pick off that special fly.

Mike Sproul of Blackville caught a 34 ½ inch male salmon on the Cains, but the unusual part was that the salmon had a tooth sticking out of each side of its mouth.  Mike said it looked like something pre-historic.  He took a picture, but unfortunately, in trying to clear some space on the camera card for some underwater shots, the picture was inadvertently deleted.

W. W. Doak and Sons in Doaktown said after the weekend raise in water, the river is returning to fishable levels and angling should continue to improve as the water settles.  As of Tuesday of this week, angling might have been termed “moderate or typical fall angling with some anglers catching.  One individual hooked a 20 pound salmon Tuesday with others catching grilse here and there.  There has been no great fall run as of yet, but each day is there is catching with some being fresh.  Generally, the water was tending to higher than normal on Tuesday, but they felt it should drop nicely by the weekend if we don’t get any more substantial rain.  Canoeing conditions were very good.

Flies of choice were mostly traditional Fall patterns such as General Practitioners, Ally’s Shrimps, L.T. Specials along with some Maribou patterns.

Derek Munn of Ledges Inn in Doaktown and Mountain Channel in the Rapids area said the water was finally getting back to normal and they were catching a few.  They had three salmon in the 18-20 pound range and reported a good mix of salmon and grilse.  Ironically, the Cains River did not get the rain that the main Southwest did and was actually on the low side.

Herb Barry Sr. of Herb’s Fly Shop on the Station Road in Blackville said that on Sunday last, they had not seen nor caught anything, but on Monday fish were moving through.  One pool reported seeing about 30 fish going by.  The water was high, but dropping slowly.  Generally it had not been good fishing, but then too, there were not a lot of anglers out so there were few to report.  At best he described angling as average and certainly not exceptional.  Most of the fish were dark with a good mix of salmon and grilse been seen, and a few of the salmon were big.

Curtis Miramichi River Outfitting in Blackville said there were some fish around, but they were being very picky about taking a fly.  The majority of those that were caught were grilse, although there had been one 30-pound salmon reported.  The water was fishable high on Tuesday, and they were hoping for it to drop nicely by the weekend.  Anglers were seeing some fresh fish, but no great run.  In short, anglers were catching a few, but no great amounts.

George Routledge of George’s Fly Shop at the Mouth of Renous in Quarryville said the water was gradually coming down.  The Renous at Kenny Hayes’ was a perfect height, but there were no fish and angling was very poor.  Tuesday saw two fish hooked and up until late Wednesday afternoon, there had been none hooked.  Besides Salmon Country, George also has Paul Marriner’s new book Modern Atlantic Salmon Flies for sale.  Both are $45.00

Flies of choice were Ally’s Shrimps, L.T. Specials, White-tailed Green Machines, Shady Ladies and Copper Killers if one was heading for the Cains.

Jim Laws of Miramichi Hunting and Fishing in Newcastle, Miramichi reported average fishing considering the high water levels, particularly on the Main Southwest where they received heavy rains.  The Northwest was a better height and anglers were catching some.  Generally there was a mix of salmon and grilse, but most were dark fish.

Syd Matchett of Trout Brook Fly Shop on the Northwest Miramichi said angling was pretty good with anglers  catching a fair amount for the time of year.  The water conditions were good and anglers were getting more grilse than salmon, but there weren’t too many local anglers out.  Syd said he would be away for a couple of days chasing Swamp-Donkeys, so anyone coming to the shop would have to see “The Boss”.

Flies of choice were Fall patterns such as L.T. Specials, Ally’s Shrimps and General Practitioners along with some Black Ghosts and White-tailed Green Machines.

Debbie Norton of Upper Oxbow Outdoor Adventures on the Little Southwest Miramichi said after the water dropped off some, fishing picked up a bit, but it was still only fishable high and catching was a bit tough at times.  However two anglers, one from Vancouver and one from Montreal had hooked six between them this week.

So with some fresh fish each day coming into the system and the trees in transition to beautiful Fall colours, it is time to get out and “on the water”.  If all else fails, pick up a copy of Modern Atlantic Salmon Flies 2ond edition by Paul Marriner.  If you wish, there’s a Collector’s Edition available by contacting Paul at .

Condolences:  Thoughts and prayers go out to the friends and family of Stephen Savoy who died suddenly on Wednesday.  Savoy was a federal warden who lived in the Loggieville area.

HUMOUR: For Solitude: Two fishermen were talking. “I love fishing. The fresh air. The solitude. Man against nature. Matching wits with the denizens of the deep. The thrill of playing and landing your cunning adversary. Tell me. Why do you fish?”
“My son’s learning the bass guitar.”