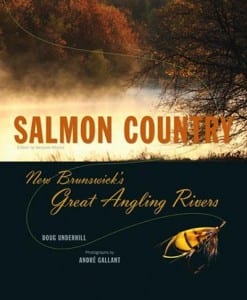 Miramichi author Doug Underhill’s book Salmon Country has been short-listed for the APMA Best Atlantic-Published Book Award! The Atlantic Book Awards Society recently announced the full shortlist for the nine different book prizes that make up the 2012 Atlantic Book Awards. Of the 26 books up for awards, four are written by New Brunswick authors. Congratulations to Doug Underhill, as well as Riel Nason of Quispamis, Jacques Poitras of Fredericton, and Susan White of Clifton Royal!

Winners of the 2012 Atlantic Book Awards will be announced at a special awards show on the last night of the week-long festival, Thursday, May 17, at 7:00 p.m. at the LSPU Hall in St. John’s, Newfoundland.

For more information or to see a full list of nominees visit www.atlanticbookawards.ca