Lessons My Mother Taught Me

May 13, 2012/Giv'er Miramichi/Comments Off on Lessons My Mother Taught Me/Arts & Entertainment, Community & Fundraising 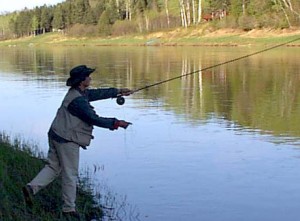 Stacy's mother, Lorraine Underhill, casts a line on the Miramichi River while her daughter snaps the photo, ever mindful of the lesson she learned as a child.

“Never put off until tomorrow, what you can do today.”
I can’t tell you how many times I’ve heard this growing up, and it still rings true to me today. Some nights when I’m tempted to leave the sink full of dishes or leave a project incomplete and say, “I’ll finish that tomorrow”, I hear my mother’s words and think, Mom would get it done right now and out of the way.

“Only a boring person gets bored.”
I remember the first time she said that – actually I think it was the ONLY time she had to say it. I was in the middle of a pre-teen angst and was bored … bored, bored, bored! Of course there were many things I could be doing. Mom always taught us not to sit around and there were a myriad of outdoor activities and indoor crafts at my disposal. But this day I was proclaiming my boredom to the world and she looked at me and said, “Only boring people are bored … and you don’t want to be boring do you?” Ahhhh … NO! I didnt want to be boring. And to this day, I have never been bored again.

“Be kind to strangers.”
This was taught through her actions, not words. My mother will stop and talk to anybody about anything it seems. Which as a kid can be pretty annoying, but as an adult it’s something I’ve come to admire. She’s quick to notice if someone needs a hand carrying bags, or if an elderly person could use some company, and she’ll take a baby right out of a new mother’s arms as she’s asking if she can hold it. When shopping together I often find her standing in an aisle talking to someone you’d think she’s known for ages, and it turns out they just met while buying shampoo, and are going to meet for lunch some day.

“Respect nature.”
Again, these words did not have to be spelled out. My mother’s love for nature is evident after only a few minutes with her outside. For years she chose a profession of working in the woods, either planting trees or operating a spacing saw, for the simple fact that she got to work outside all day. Canoe rides up the river or walks along the shore were always a lesson in picking up garbage left behind by others, and to not leave any of our own. Growing up we were always quizzed about the names of flowers and types of trees as we walked in the woods. It’s especially nice now to see her continuing this tradition with her grandchildren, asking them to look at the bark of a tree, or its leaves, to determine the species, or to identify a bird by its song.

“If you’re going to catch a hook in the lip, don’t eat the worm!”
Mom always loved fishing and would take me with her to the river. Once when I was about 10 years old, I was sitting on the shore in the long grass, not paying attention to her, and she had apparently lost sight of where I was. She cast her line and hooked me in the mouth. Once the screaming stopped and I was stretching out my lip for Mom to carefully remove the hook, she jokingly said something about me being careful not to eat the worm. New panic set in because up until that point I hadnt realized there was a worm on the hook! I remember understanding that even though it was a bad situation, there was no need to make it worse, by eating the worm!

My sisters and I sometimes take these lessons for granted, not really thinking about where they originated, because they’ve been ingrained in us and are just part of who we are. But on this Mother’s Day it’s nice to remember how they began. Thanks Mom!

Stacy Underhill lives in Barnettville, NB with her husband and their adorable kitty, Zoe. Like her mother, Stacy loves spending time in nature, whether hiking the trails at French Fort Cove, snow shoeing in the woods that surround her home, and of course spending time at the river fishing and canoeing with her mom.