Miramichi Fishing Report for May 3, 2012

MIRAMICHI – We turn the page to another month in our fishing calendar, and with May comes many expectations.  There are still decent numbers of spring salmon around, trout season for rivers and streams has opened and lakes will be open May 15.  There are fiddleheads to be picked, and the bright salmon should be starting up some rivers by mid to late May.  So get your outdoor chores done so you can be ready when the opportunity presents itself.

W. W. Doak and Sons in Doaktown said angling was moderately good, and holding for the time of year with some fish still around.  Water conditions were good. 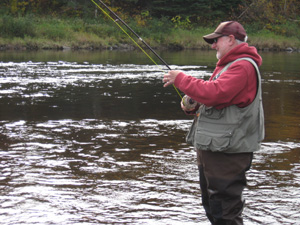 Flies of choice were Black Ghosts, Renous Specials, Golden Eagles and Mickey Finns, along with some Maribou patterns.

Derek Munn of Ledges Inn in Doaktown and Mountain Channel in the Rapids area said he had his sports on the Northwest on Wednesday for a change, but they still did well landing six salmon and three grilse, in spite of the water being a bit low.  Another angler he had out in the Doaktown area this week did well with six salmon and two grilse.  He said there were still decent numbers of fish around, and they had also picked up a couple of two-pound trout.

Flies of choice were mostly Maribous in darker patterns.

Herb Barry Sr. of Herb’s Fly Shop on the Station Road in Blackville said angling was slow.  There were still fish around, but fishing was “tighter” than last week.  One angler did catch five on Monday morning, but there were not a lot out as it was very cold and windy.  There had been some good-sized salmon last week, but no monsters.  He had no trout reports as of Tuesday evening.  Water was a good height.

Flies of choice were Silver Smelt and Gold Smelt.

Curtis Miramichi River Outfitting in Blackville said there was still good fishing, but not a lot were out as conditions were far from favourable.  Those who did brave the elements were having success.  The water was good, but canoers should use a lot of caution.

Flies of choice were Blue Smelts and Maribou patterns in beige and brown.

George Routledge of George’s Fly Shop at the Mouth of Renous in Quarryville said angling t6here was very slow with not a lot of anglers out as it had been very cold and windy.  Some boats that were trolling were getting five or six a day, and mostly below the Quarryville Bridge in the Doyle’s Brook area.  The water was still high with the bushes on the island just out of the water.  There were no smelts in Quarryville on the weekend.  The shore ice which had piled up after the ice ran was nearly gone.  He had no trout reports by late Tuesday.

Jim Laws of Miramichi Hunting and Fishing in Newcastle, Miramichi reported that there were still some spring salmon around, and he had heard of decent trout reports in the 1-2 pound range.  The bass that were at Strawberry Marsh had moved slightly up-river and trout fishermen were not encountering any the early part of this week.  Laws was interested to see if angler in other rivers were encountering any female bass and if so he would like anglers to call him at 622-3071.

Syd Matchett of Trout Brook Fly Shop on the Northwest Miramichi said it was hard to get a good read on the numbers of fish around as there were very few anglers out on the weekend and no sports at the camps.  The water condition was good, but he had no trout reports late Tuesday.

Debbie Norton of Upper Oxbow Outdoor Adventures on the Little Southwest Miramichi said there were still spring salmon around, but certainly not in great numbers.  They were few anglers out and no one in camp.  The water level was good for fishing.

The MSA Hatchery reported the smolt wheels were operating, and that the smolt had started their sea-ward migration.  Summer students in the Conservation Core had also started work at the hatchery. The two traps at Cassilis and Millerton were being prepared to also monitor out-going fish.

So  hopefully the weather co-operates a little more this week as anglers enjoy the last couple of weeks of spring salmon and some early trout fishing as they get out and “on the water”.

Thought for the Week: “What a tourist terms a plague of insects, the fly fisher calls a great hatch.”  Patrick F. McManus

Just back from my camp in Gray Rapids.  Enjoyed good luck from shore Friday late afternoon on a # 2 Blue Smelt, for a nice full bodied hen @ 15 lbs.  I highly recommend that you make it clear to your readers, that the regs say no more than 10 live release allowed per day for spring salmon fishing.  Too many so called anglers, via trolling, are going about bragging @ 25 daily, wherein they could lose their license, and their guide could be subject to suspension of his for one full year, aye.
Paul Valeri
– – – – – – – – – – – – – – – – – – – – – – – – – – – – – – – –
Hi Doug,
I love your weekly report . It keeps me going until we get back to the Northwest every summer with Danny Roy. Of course we always stop in to Sid’s shop to get a license and the hottest “new Fly hook”. Say Hi to Frank Somers and send me his email address if you have it. I’m down to my last Frank’s special  Butterfly!!!
Dan Wanczyk