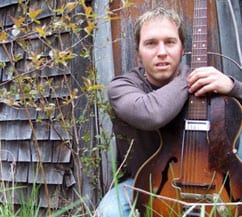 Not everyone can say they’ve gotten the thumbs up from Don Cherry, but one Miramichi man can. If you were watching Coach’s Corner last Saturday night, you may have recognized a familiar name.

At the end of the segment Cherry introduced a video for Special Hockey International featuring a song called “Yes I Can” which was written and performed by Miramichi’s own, Jason Barry.

“I just love the guy, Jason Barry, he did a great job,” Cherry said. “Jason Barry, thumbs up.”

Click below to watch the video featured on Coach’s Corner.

“Thank you to Don Cherry and everyone for supporting Special Hockey International and Kids ability,” Jason said. “It sure has been a roller coaster since all of this started.”

Three time winner of the Canadian Country Music Award (CCMA) for Guitar Player of the Year, Jason is the son of Howard and Betty Barry of Derby Junction. He operates Barrytone Studios in St. Clements, ON. For more information visit his website at www.jasonbarry.org.