Anglers are back on the river, and reports are on the positive side for the first two days, with poorer results in some areas Wednesday as the water was raising and dirty.  With rain Tuesday night, and more in the forecast for Thursday evening and on Friday, coupled with warmer temperatures, conditions could be iffy for the first part of the weekend. 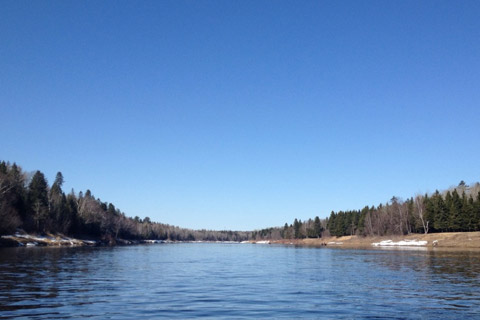 W. W. Doak and Sons in Doaktown said Opening Day Monday was good angling, but mixed a bit on Tuesday and Wednesday with water coming up two feet or more and becoming dirty.  The water had been quite low for the time of year, but the raise should help clean up the shore ice, and bring ice down from above Norrad’s Bridge.  Generally, there was an optimistic feeling about the season thus far.

Derek Munn of Ledges Inn in Doaktown and Mountain Channel in the Rapids area said there was lots of water by Wednesday and it was still on the rise.  Prior to that, boats were pretty well limited between the Doaktown Bridge and Nelson Hollow, but by Wednesday they were able to head a lot further up river.  He figured the raise in water would also clean up the ice from above the Boiestown area.  Angling had been good with boats averaging between 8 to 10 fish the first two days.  Wednesday was slower.  About 80% of the fish caught were salmon with few grilse.  No trout had been hooked.

Flies of choice were mostly Marabou patterns along with Renous Specials and Black Ghosts.

Herb Barry Sr. of Herb’s Fly Shop on the Station Road in Blackville said angling there had been pretty good Monday and Tuesday with boats averaging 6 to 10 fish a day.  Hey were also hooking and losing some.  The water was up, but certainly not too high as it had been very low.  However, it was getting dirty Wednesday, and some anglers were losing their sinking lines.  Most of the fish hooked were salmon.  Another pair boated from Doaktown to Blackville but only picked up two salmon and a grilse.

Flies of choice were Silver Smelt and the Gold Smelt followed by the Blue Smelt, Christmas Tree and Golden Eagle.

Curtis Miramichi River Outfitting in Blackville said angling was good on Monday and Tuesday, but was slowing Wednesday as the water was on the rise and getting dirty.

George Routledge of George’s Fly Shop at the Mouth of Renous in Quarryville said that there were 40 boats in that area on Opening Day along with anglers on both shores.  Generally angling was slow for both groups.  On Tuesday, boats that were trolling below the Quarryville Bridge were having pretty good fishing, while those above it were not doing as well.  There was some improvement from shore anglers, but still not great fishing.  Wednesday was quiet with few being caught.  Boats could not head up the Renous due to low water.  One boat that had put in around the Manderville Farm on the Renous had good angling Monday.  There also had been some trout caught and released as the season for them does not open on the Miramichi until May 1.  Anglers were switching more to sinking lines as the water was on the rise.

Jim Laws of Miramichi Hunting and Fishing in Newcastle, Miramichi reported decent angling for spring salmon.  There were even a couple of bass hooked.  He found it odd that anglers from Rogersville had to either come to Miramichi or go to Richibucto to pick up an angling licence as none were available there.

Syd Matchett of Trout Brook Fly Shop on the Northwest Miramichi said angling was good on Monday with a few boats reporting catches of 8 to 10 fish.  On Tuesday, Bill Hubbard hooked about a half dozen from shore.  The water was coming up some, but not a lot by Tuesday evening.  He hoped rain Tuesday over night would raise the water more, as boats were having a tough time getting around.  Ironically, the fish caught there were mostly grilse.

So as the season hits its second week, it is time to get out and “on the water”.

Take time to watch a documentary titled Salmon Confidential.  Go to www.salmonconfidential.ca.  It is scary in more ways than one.  It is close to an hour long, but well worth the watch.

There still has been no word from DFO regarding final plans regarding a bass fishery for the Gulf area which includes the Miramichi.  We are hoping for an answer sooner than later.  So continue to pressure the Minister of Fisheries, Honourable Keith Ashfield for a spring retention season, or our salmon stocks could be next on the endangered species list!

Our best wishes go out to angler John Clark who has undergone surgery this week.  We all wish him a very speedy recovery.

I welcome your fish stories and any photos that you wish to submit.  Please include identification of those involved and who took the photo. My e-mail is

Thought for the Week: “The only reason I ever played golf in the first place was so that I could afford to hunt and fish.”  Pro Golfer Sam Snead