Miramichier RRRolls Up The Rim to Win a 2013 Toyota RAV4 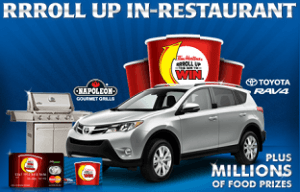 By simply rolling up the rim of her Tim Hortons cup, Denise Newbatt of Napan is a new owner of an all-new 2013 Toyota RAV4, a grand prize in this year’s RRRoll up the Rim to Win® contest at Tim Hortons.

“Having a grand prize winner at our restaurant is exciting for our guests, team members and the community,” said Wade Humphreys, Tim Hortons restaurant owner in Miramichi. “Our guests are happy when they win a donut or a coffee, so you can imagine how thrilling it is when someone rolls up the rim and realizes they’ve won a new vehicle!”

The Roll Up The Rim To Win contest runs until cup supplies last. Prizes may be claimed until May 19, 2013. Contest rules, odds of winning and prizing information can be found at participating Tim Hortons locations or at rolluptherimtowin.com.