A Friday Night Racket in Renous

May 29, 2013/Giv'er Miramichi/Be the first to comment/Arts & Entertainment, Community & Fundraising 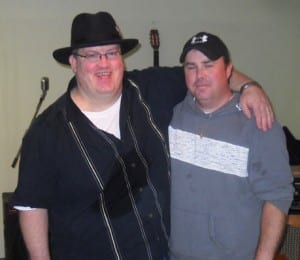 ECMA nominated Terry Whalen was the first musician with a return engagement to the Friday Night Racket at the Miramichi Folklore Park in Renous last week on May 24th.

A good crowd turned out for Terry’s mix of rock and blues standards and his own original songs.

This week’s Racket on Friday May 31st will feature The Morrisons, from Miramichi, who love the music of Stompin’ Tom, Merle, Johnny,Hank, Buck, Gordon Lightfoot and many more.

Come listen to their western swing/rockabilly sounds this Friday at the Miramichi Folklore Park from 8 to 11 pm. Admission is $5. There will be a 50/50 draw and the regular Mystery Item contest where you can win free admission to the following week’s Racket.

“They did a great job the first time they were here and we hope to have them back for a dance on the first Saturday of the month from now on,” says Bernie Colepaugh. “Zack’s Band play mostly country and rock standards.”

The dance will be from 9 pm to midnight. Admission is $6.

The Miramichi Folklore Park is located at 46 Memory Lane, formerly Carter’s Country Store, at the juncture of Routes 8 and 108. For more information telephone (506) 622-1569.

Below are two videos of Terry Whalen’s performance at the Miramichi Folklore Park from Friday May 24th.