High water continues to be the story for much of the system, but on the positive side, it is bringing in fresh fish, and allowing them to move quickly through the system toward the spawning grounds.

While out fishing Monday of this week, I was greeted by a pleasant surprise.  The students from Napan Elementary were releasing into the Northwest Miramichi very young salmon which they had raised at their school as part of the Fish Friends program.  Joni Craig was leading the students and helping as they were introduced to conservation measures which bode well for the future. 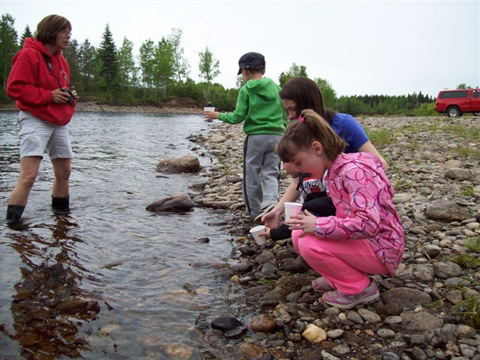 Doug White’s Tammerack Sports Fly Shop in Juniper said the waters have receded for now and people are out fishing again. There is still a run of sea-trout with the largest being about four pounds and the average about two pounds. There was talk of a salmon being caught on the North Branch but nothing he could verify.

Flies of choice were Butterflies, bugs, streamers and bombers.

W. W. Doak and Sons in Doaktown said anglers were picking up some salmon and the odd grilse on the Main Southwest and Dungarvon.  The water was a bit high, but dropping.  They felt the water should not rise too much from Wednesday’s rain, although the Cains could be up as rain was further south. 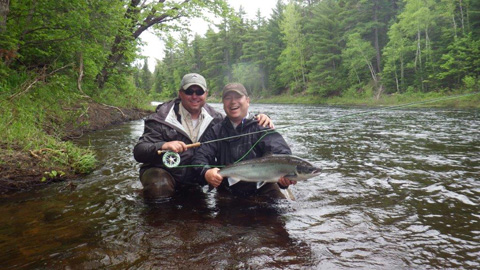 Derek Munn of Ledges Inn in Doaktown and Mountain Channel in the Rapids area said there were salmon being hooked along the river.  He’d heard of around 10 caught Tuesday.  The water was high, but dropping.  He and Andrew Anthony hooked into five and landed three on one of the Main Southwest Miramichi tributaries Tuesday.

Curtis Miramichi River Outfitting in Blackville said there were a few salmon going if one could find a place to fish as the water was very high.  The high-water pools were fishing well.  Catches were mostly salmon.  They had a few spots open for their Fly-Casting Instruction on June 22.  If interested contact them at (506)843-2481.

George Routledge of George’s Fly Shop at the Mouth of Renous in Quarryville said last Friday there were two salmon and a grilse taken at Quarryville, and on Tuesday there were both salmon and grilse caught on the Renous.  The water was dropping nicely, and if there was no more rain, the weekend should be good.  He had also heard a few reports of salmon in the Blackville area, so it seemed that the fish were starting to move in.

Jim Laws of Miramichi Hunting and Fishing in Newcastle, Miramichi reported anglers getting some salmon on the Northwest and the odd grilse.  The water was still high, but if there was no rain the weekend should be good.  Other anglers were still catching Striped Bass.

Syd Matchett of Trout Brook Fly Shop on the Northwest Miramichi said that Brian Hatch released a salmon Wednesday morning, and Syd himself did the same Tuesday.  Generally, there were decent numbers going through along with a few grilse.  Bobby Driscoll caught a grilse this week in a way Syd described as “trolling”.  Driscoll had finished fishing and was making his way back up shore with his rod over his shoulder and the line in the water behind him when he hooked and landed a grilse.  Total averages along the system were between 5 to 10 fish a day.  Water conditions were good.

Debbie Norton of Upper Oxbow Outdoor Adventures on the Little Southwest Miramichi said there was lots of water around and some salmon and a few grilse.  Mark Fillamore landed a salmon while Lilliam Lee hooked a salmon on Monday.  Norton had also heard of other salmon being hooked.  The water was dropping quickly.

Flies of choice were Butterflies and White-tailed Green Machines

With not too much rain throughout the system, river levels should continue to drop.  So plan to get out and “on the water”. 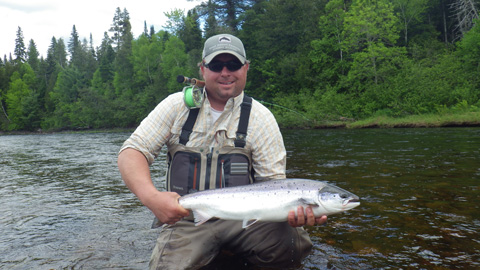 Derek Munn on tributary of the Main Southwest Miramichi

Really enjoy your report. Don’t know if you are looking for stories, but here’s one.

Headed to the Restigouche Wed June 5, more for a river tour than fishing. High water actually contributed to safe boating between stretches. Ran into some friends at Red Bank who were having some luck. Left Red Bank 7am Thurs am headed for the Kedgewick, hopefully to visit some friends who bought the Fraser lodge. Arrived 15 miles up at Rapids Depot around 2:30 after a hair raising travel up the rapids just before. Class III on the other side of Rapids Depot. Discretion was the better paid of valour, so turned around and headed back to Downs Gulch. Weather and river were God given. Amazing to see all the guys busy with prepping the lodges for the upcoming season. 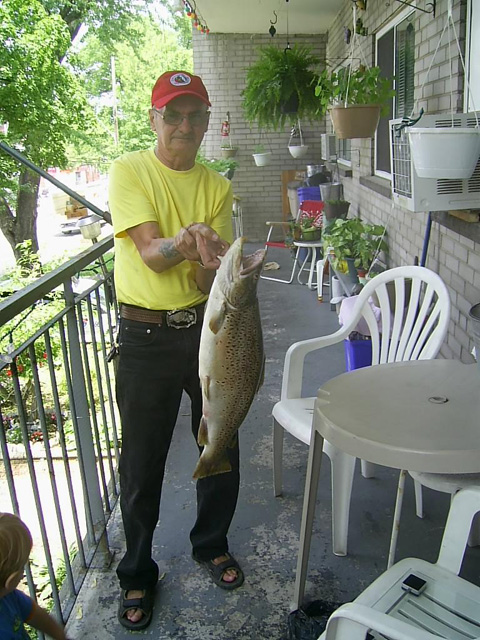