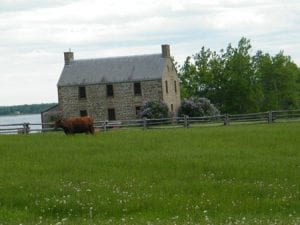 For nearly four decades MacDonald Farm has been a must-see cultural attraction on the Miramichi River. Set in the serene pastoral setting of Bartibog, overlooking the river, its commanding presence has mystified visitors and surprised locals with the history they only thought they knew.

Now, the farm opens its doors for another season, and the Miramichi Highland Society, who has been operating the site since 2012, is excited already.

President Dawn MacDonald, a tireless volunteer and local enthusiast, says the story of Alexander and Grace MacDonald is not as well known as it ought to be. As founding members of the area’s initial Anglo-Scottish settlement, their time and all of the excitement that went with it, is truly remarkable.

“They were pioneers,” she says, “and we look to help people realize the hardships they must have faced, as well as the simple joys of farm life.” 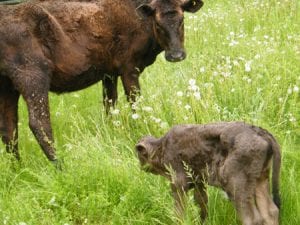 Among those straightforward country pleasures most recently experienced was the birth of a new calf early Thursday morning to one of the farm’s two cows. Another calf is on its way as well, and expected to arrive shortly.

This new arrival has sparked a contest in order that the heifer is named promptly. Interested entrants are encouraged to drop off their submissions to the Interpretive Centre. Kids who bring a submission get into the Farm for free. The prize for the winning submission will be two adult and two children movie passes. The winner will be announced the day of the End of School bash on June 22nd. School classes from St. Andrew’s Elementary and Miramichi Rural have already come to visit, so anyone with a name had better hurry.

Site Manager, Muriel MacCullam is looking forward to a great season with a staff that boasts both old hands and spirited rookies. This summer promises big things at the Farm, so don’t miss out, visit them on Route 11 or call for more information at (506)778-6085 or (506)778-6101.