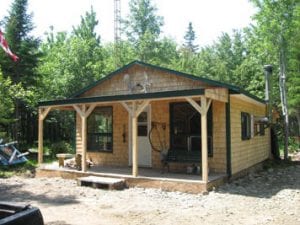 My friend Ballard (Gerry Durelle) is a hunter born and bred. It is surely in his blood. He is also an awesome storyteller. I have been working with him for 35 years and enjoying his stories the whole time. Ballard built a camp in the woods in Baie Ste. Anne and told me the story of how the camp got its name.

He has a blazed line on his lot that had been growing dim and needed to be painted again to keep the visual so that he could see the line. He got some paint from Department of Natural Resources and started to repaint the line, in some cases doing some cuts to the trees to aid him. It took him awhile and he had the job partly finished and decided to stop for the day and continue the next day. So he dropped the brush into the can, put the cover on tight and went back to the camp.

The next day he went to start again and he found the can had been pierced by teethmarks. It turned out a bear had come, ate the paint, spilled a bunch and took off. There was the empty can, the brush and a puddle of dried paint.

Several days later while guiding a hunter, he and the hunter were in the stand in the woods and they could hear a thump bump coming from the woods. There was Mr. Bear, and, as he got closer, they could see that the bear had red paint on both front paws, and a red V of paint on his forehead. Gerry thinks it was from brushing flies away from his head while he still had wet paint on his paws. Gerry told the guy he was with not to shoot the bear because he thought it was an omen.

Gerry was telling the story to one of his friends and the friend spoke up and said, “Oh that’s Wayne Savoie’s bear.” Gerry said, what do you mean? The guy said, “Well, Wayne had a couple of gallons of paint in his camp and he was out of the camp one day and when he came back the camp had been ransacked. The bear got into the paint and when he stood up and put his paws on the wall his paw prints were painted onto the wall.” So Mr. Bear had his first taste of paint and painted paws. This was a couple of years before he decided to eat Gerry’s paint. Thus the reason to this day, Gerry’s camp is now known as “Painted Bear Camp”.
Gerry is also a man that likes to work with wood, building things, carving things. There is a huge poplar tree that he has decided he is going to carve a bear out of and will paint the bear and put it in front of his camp.

Another time Gerry said he and his nephew were in the stand and they had no guns but did have a camera with them as Gerry was showing his nephew how the animals come to the stand when he had left them food over a period of time. They heard a noise in the woods and Colin said, “There’s a moose coming.” Gerry said, “No it’s a bear.”

Sure enough, a mother bear and two cubs came through the clearing. Colin decided to take a picture and the flash came on. Quick as a lick, the cubs scrambled up a dead tree a short distance from the stand and the boys could see eye to eye with them. Momma bear was not happy and started toward the tree stand growling and snapping her jaws at them.

He told Colin not to move and be very still because they had no weapons and the least little movement could agitate the bear. They had to wait until the bear cubs went down the tree away from the stand. In the meantime, the sow stood by the treeline and called the cubs toward her. She was still giving them the eye and very on edge.

He told Colin that they had to go down the tree stand, walk sideways, not looking at the bear and try to get to the dirt road several yards behind them. He was very adamant that Colin was to go very very slow. Gerry is a joker and Colin knew that he was serious in this case.

Gerry told Colin to go down first and Colin wanted to know why. Gerry told him because he was younger, he could run faster if the bear chased them. Colin, said, “The heck with that! You go first.”

The bear and the cubs were still at the edge of the woods and very nervous when they very carefully got down from the stand. Gerry first, then Colin. They got to the dirt road without incident. As they were walking towards the truck, Gerry noticed that because of Colin being scared, he was taking two steps to Gerry’s one.

Once out of sight of the bears, Gerry ran by Colin like a bat out of hell, yelling, “They’re coming after us!” Colin immediately shifted into high gear and passed Gerry like he was stopped and never looked back until he got to the truck. He jumped into the truck and slammed the door. By the time Gerry got there he was laughing his head off. That was the last time Colin came to the bear stand with Gerry.

Debby (Bowie) Frost was born in Chatham, worked in the Land Registry for over 30 years, and is now retired. A people person, Debby loves her family and likes to write.