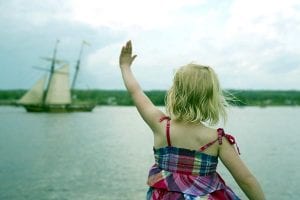 Shauna Hiemstra submitted this photo of her four year old daughter Avery waving to a ship during the Tall Ships Festival in Miramichi this summer. Find more of her work by searching Shauna Hiemstra Photography on Facebook.

We asked local tourism operators how their summer went and this is what they had to say:

Record crowds attended the Miramichi Folksong Festival and two evening shows sold out. Tourists came from all over New Brunswick as well as throughout the Maritimes, across Canada (Quebec, Ontario, British Columbia, Alberta, Yellowknife), the US (Maine, Massachusetts, New York, Indiana, Mississippi, California), and further abroad (Germany, England and Ireland). A guest book recorded those attending from outside the area.
Susan Butler, Miramichi Folksong Festival.

Our season started off with a bang beginning with the Tall Ships arriving on May 31 – all rooms booked from the Thursday through Sunday, and with our two themed Pirate Pub nights, all tables were booked both Friday and Saturday evenings. The general consensus among our out of area guests was how much they wanted to return in future. Gross revenues for May were 122% over May 2012. June 2013 was comparable to 2012, however, July was up 35% over the same time in 2012. August and September are right on track to exceed last year with a noticeable increase in our Mystery Food Adventure experience packages. We’ve had guests from Vancouver, Massachusetts, Spain, Quebec and even New Zealand who have enjoyed this experience. The foursome from New Zealand advised they had eaten in some of the most expensive and highly regarded restaurants in the world and they categorically stated this was absolutely in the Top 10.
Sara MacInnis,
The King George Bed & Breakfast

Despite the weather, overall the summer was good. We mostly saw the post baby boomers, staying for three or four day vacations and they wanted relaxation and simplicity, nothing too elaborate. A lot of people are choosing to vacation in their own province and within the Maritimes. We had a lot of tourists from NS, PEI , and neighbouring French communities. We were very busy during the Tall Ships Festival and I must have had 450 people waiting to get on that first trip out. What I really liked to hear was a lot of first time visitors who came for the tall ships said they were coming back again.
Azade Hache, Miramichi River Boat Tours

I just want to thank you for the wonderful video and still pictures of the airshow at Miramichi Airport yesterday. I felt like I was there even though I live 1000 miles away. Took me right back to the 1950’s when I worked on the base and fighter jets were in the sky every day in Miramichi. What a thrill to hear that sound again! Got a great laugh at the comments by some locals after the pilot roared in unannounced & scared them out of their wits! He must have been laughing too.
downhomegal, Mighty Miramichi Facebook Comment

The Atlantic Canada International Air Show was a great success for hotels in the Miramichi area. At the Howard Johnson we welcomed numerous pilots, organizers and sponsors that were participating in the Air Show. It was a real honour to welcome these amazing individuals! They were extremely organized, professional and just genuinely nice people. We definitely anticipate a future Air Show in the Miramichi, what a great event to be part of!
Melanie Robertson, Sales Manager
Howard Johnson Inn & Suites

I am new to the business community in the Chatham area. My fellow business owners always have a smile on their face and a helpful hand. One of my favourite experiences is when two young boys stopped into the gallery, showed me their slushies and promised to be careful. The younger of the two went from painting to painting explaining the processes to the older boy. That is a wonderful thing about doing business in the Miramichi, patrons will stop in to see how you are, if you need a tea or coffee or help with anything. That is remarkable, to have people who are not only purchasing the works of the artists but also stopping in to see how we are doing and what is new. That sense of community family carries over into tourism. We have had patrons from New England who have stayed to chit chat and as they leave stop to say that they will return again next year. During the Irish Festival a family of German bus tourists who were staying at the Rodd were excited to find we have a German born artist. They left a message in German for him. This sense of family in Miramichi is not only heart warming but it’s a wonderful welcome to tourists. I believe that’s why they smile when they say they will be back again next year.
Laura Lea Comeau, Water Street Gallery

A couple from Bathurst dropped by the MRTA booth at the Air Show on Sunday and said that while they had originally only planned on spending Saturday at the show, found it was so good they travelled back again for the second day! O’Donaghue’s Pub indicated that both Friday and Saturday night at the Tall Ships Festival were as busy, and possibly busier, than St Patrick’s Day! On leaving Escuminac Wharf after a moving encounter with one of the survivors of the Escuminac Disaster, a tourism bus operator/ hostess said it “was the most emotional and powerful experience in all my 22 years in the tourism business.”
Terry Power, Development Officer, Tourism Heritage & Culture

This summer the Visitor’s Information Centre on Highway 11 saw visitors from many different places. In July alone, we had roughly 1500 visitors stop in. We’ve had people from as far as New Zealand, Australia, Spain, China and the Philippines! Many were impressed with our great river, and the scenic routes in and around the city. We’ve also received many compliments on the great accessibility and the location of the centre. On the Monday before the Tall Ship Festival a couple stopped in from Australia looking for information on Fredericton where they were spending the night on their way to Toronto. They saw the promo clip on our Smartboard about the Tall Ships and the husband said he had a passion for wooden ships. After a discussion with me they decided to stay the rest of the week so they could attend the Festival on the weekend. At the air show I talked with a couple from NFLD that planned their whole vacation around coming to the air show and they had never been to Miramichi before. They told me they saw a house on a lake the day before that they loved and it had a for sale sign on it. I told them I knew a great realtor and they said they were going to give him a call. They came for an Air Show and now may end up moving here! When I talk with our members they are all talking about higher numbers of guests this year.
Cindy Trevors, Manager
Miramichi River Tourism Association