Gradually, water levels are getting to fishable levels and anglers are starting to hook a few fish, but in no great numbers.  The Fall foliage is beginning to hit full stride and with bird season now open, it is time for a little “Blast ‘n Cast”. 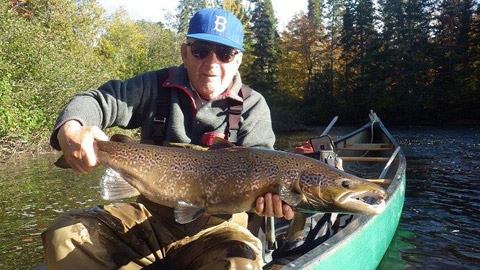 W. W. Doak and Sons in Doaktown said water conditions were good a good level and good temperature.  Angling had picked up a little this week.  There was a report of a 40 to 41 inch salmon caught in the Boiestown area and an 18-pounder in Doaktown.

Derek Munn of Ledges Inn in Doaktown and Mountain Channel in the Rapids area said they were seeing some fish on the Main Southwest and the Cains, and catching a few, but not many.  These were mostly salmon.  Mountain Channel did catch two on Tuesday evening and one Wednesday morning.  The last did have sea lice.  Water conditions were a good level and good temperatures.  Besides the “Cast ‘n Blast” head guide Derek Munn said they are taking hunting reservations for their Pheasant Preserve.  Anyone interested in a different hunting experience should contact him at Ledges Inn (506-365-1820)

Herb Barry Sr. of Herb’s Fly Shop on the Station Road in Blackville said angling was very poor with only the odd fish being caught on the Cains, and those were salmon.  They were not even seeing any to speak of.  The water was still fishably high and cold.

Flies of choice were Mickey Finns, Renous Specials and anything orange.

Curtis Miramichi River Outfitting in Blackville said anglers were catching some on thee Main Southwest, and a few on the Cains and Renous, but not in any great numbers.  The water was still high, but fishable.  There was a report of a 35-pound salmon.  Canoeing conditions were very good.

George Routledge of George’s Fly Shop at the Mouth of Renous in Quarryville Said angling there was slow.  There were very few anglers out, and those that were, were not seeing or catching any fish.

Jim Laws of Miramichi Hunting and Fishing in Newcastle, Miramichi reported slow angling with the water still a tad high.  Not many were being caught, and those that were being hooked were mostly salmon.  Striped Bass numbers were getting up around Miramichi, although not many were seen at Strawberry Marsh yet.

Syd Matchett of Trout Brook Fly Shop on the Northwest Miramichi said angling there was pretty decent this past week.  One group hooked three nice salmon, while another angler hooked a salmon and a grilse.  He had also heard of a salmon and a grilse on the Little Southwest.  Water conditions were decent and cold.

Flies of choice were Red and Orange Marabous and Same-Thing-Murrays.

So with decent weather and water levels, great Fall colours and a few fish around, it is time to get out and “on the water”.

Thought for the Week: “Most anglers, especially tyros, false cast too often. Three false casts should be sufficient for any throw and two is better. One is perfect.”  Joe Brooks 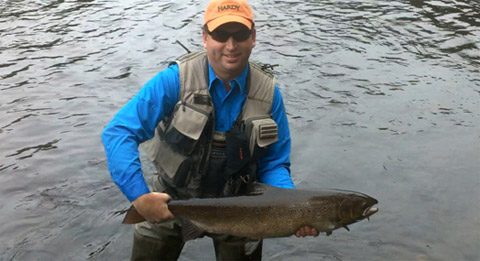 Greg MacDonald with a nice salmon caught on the Little Southwest

My co workers, friends and i, read your report every week and enjoy it very much.

My co worker, Greg MacDonald caught this nice salmon on the little southwest this past weekend. Hoping for great numbers for the last few weeks we have left.

Hope you have a great week, keep up the good work with the report and good fishing.

Photo from Ken McCracken, of a “very large salmon caught near Boiestown”. The fish was caught on a #6 Blue Smurf and 6lbs test leader. Ken says, “I have been fishing over 50 years and this is one of the largest I have seen” 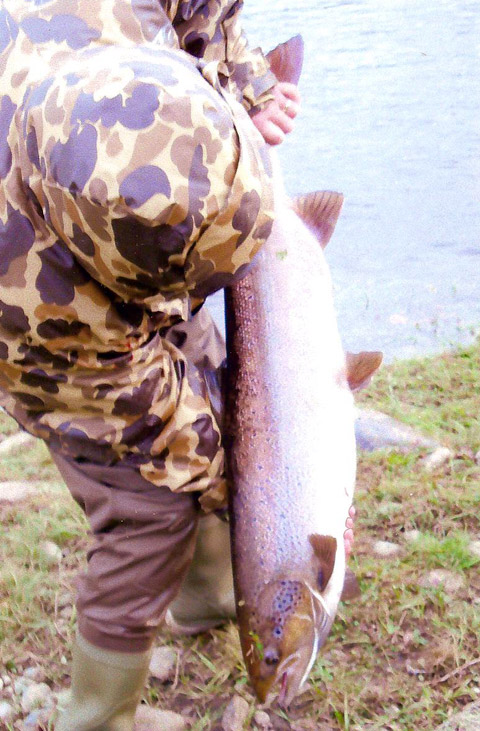