Great Week for the Timberwolves! 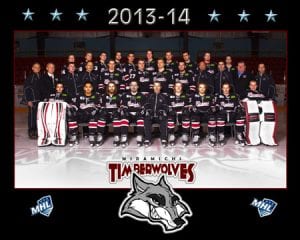 The Timberwolves make their debut in the national rankings after going 2-0 on the week.

The Timberwolves make their debut in the national rankings after going 2-0 on the week. On Wednesday night in Campbellton, they went on an offensive rampage in an 8-1 victory over the Tigers. On Saturday night, they hosted the Summerside Western Capitals and came out on the right side of a 5-4 game that was decided in a shootout. Rob MacDonald’s T-Wolves are among the hottest clubs in the MHL, securing points in 18 of their last 21 contests (17-3-0-1). Miramichi currently leads the Meek Division with a record of 27-9-0-3, two points ahead of the Dieppe Commandos.

Two T-Wolves find themselves named to the MHL’s top Three Stars of the week for January 27th – February 2nd. 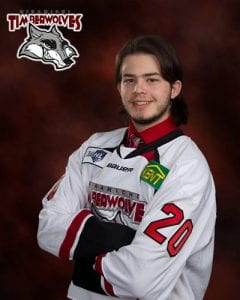 The first star for the week is Miramichi Timberwolves forward Jordan Kennedy. The 18 year old from Labrador City, Newfoundland set a new high water mark for points in a week so far this season, posting two goals and seven assists in just two games.

On Wednesday night in Campbellton, Kennedy scored once and added four helpers as the T-Wolves defeated the Tigers 8-1. Kennedy’s five point night earned him the game’s second star. On Saturday night at home, the first year MHLer posted a four point effort with a goal and three assists in his club’s 5-4 triumph over the Summerside Western Capitals. Once again, Kennedy was named the second star of the game. Amazingly, this nine point outburst represents nearly one third of Kennedy’s offensive production this season as he currently sits with 30 points in 33 games.

Before joining the Timberwolves, Kennedy spent parts of the last two seasons with the Gatineau Olympiques of the QMJHL, appearing in 29 regular season games during that time. When not in the Q last year, he also spent a short but notable stint with the Western Kings program in the Newfoundland midget AAA ranks, where he posted a phenomenal 28 points in just eight games. 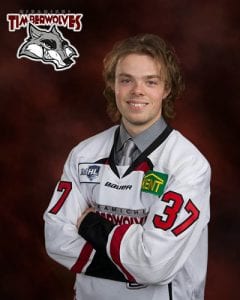 The third star of the week is Miramichi Timberwolves forward Bryce Milson. The 20 year old Miramichi native scored four goals and added three assists in two games this week. With the pair of victories, the T-Wolves have retaken the lead in the Meek Division standings and have also earned their first appearance this season in the weekly CJHL Top 20 rankings.

On Wednesday night in Campbellton, Milson was named the game’s first star as his three goal, two assist effort helped pave the way for the Timberwolves’ 8-1 victory over the Tigers. On Saturday night, Milson posted a goal and an assist in Miramichi’s 5-4 win over the visiting Summerside Western Capitals.

Milson has been remarkably consistent while climbing his way towards the league’s scoring leaderboard, with 44 points so far this season. The first year MHLer, who had spent the previous four seasons in the QMJHL with Acadie-Bathurst, Lewiston, Drummondville and Cape Breton, is currently riding an 11 game point streak, having recorded at least one point in every game in 2014. Furthermore, Milson has been held off the scoresheet just five times in 32 regular season games to this point.

The Timberwolves play three times this week. They host the Dieppe Commandos in a battle for division supremecy on Thursday night at 7:30. The following night, they face off against the Campbellton Tigers in Miramichi. Game time is 7:30 pm once again. Finally, the T-Wolves will travel to PEI for a clash with the Summerside Western Capitals on Sunday at 2 pm.

Watch all the games live on www.fasthockey.com.