There is certainly no shortage of water in the rivers and temperatures are great for the fish.  There are dribs and drabs of fresh fish making their way into the system, and with the water conditions, they are likely in high gear.  But this week is more positive with more reports of fish being hooked and seen, although over all in very small numbers yet.

Doug White’s Tammerack Sports Fly Shop in Juniper said it’s been a good week here on the headwaters with several salmon hooked and released as well as some nice sea-trout. The water is in good shape with temperatures in the fifty’s and low sixty’s with good clarity. Had a lad in the shop that claimed he caught a 31 inch striper around Blackville last week. Takes all kinds I guess but one guy wouldn’t buy any bombers because the barb was too small, so much for hook and release.

W. W. Doak and Sons in Doaktown said reports were a bit more positive this week tan last.  There were a few more reports of bright salmon and even the very off grilse.  Water levels Tuesday were a little high in the Blackville area and close to good in Doaktown.  However, rain Wednesday would have changed the status somewhat.  Water temperatures were very good.  There were no trout reports.  It was felt that generally, the season was running about 1 ½ weeks late.  But at least this week, there were more reports of hook-ups and sightings with about six between Blackville and Doaktown. 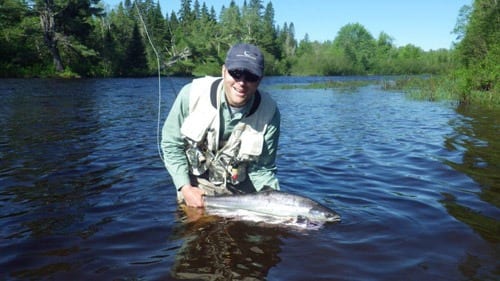 Derek Munn of Ledges Inn in Doaktown and Mountain Channel in the Rapids area said a few salmon were being hooked, but not very many.  A few had been seen at Mountain Channel last weekend, but there were no takers.  The water had been a good temperature, but levels came up again on Wednesday.

Herb Barry Sr. of Herb’s Fly Shop on the Station Road in Blackville said there were a few bright salmon seen and hooked in the Upper Blackville-Blissfield-Doaktown, but not very many.  There was one grilse caught.  Water levels in Blackville were a little high before Wednesday’s rain.  There were no trout to speak of, particularly sea trout.

Curtis Miramichi River Outfitting in Blackville said angling was slow with only a very few salmon reported yet.  Most reports were from Upper Blackville/Keenan area.  The sea trout run was finished.  The water was a bit high Tuesday, and probably higher after Wednesday’s rain.

George Routledge of George’s Fly Shop at the Mouth of Renous in Quarryville said there was only the odd report of bright salmon being hooked here and there.  The Mouth of Dungarvon had reported a grilse.  The only trout reports were the odd river trout.  The water was a bit high even before Wednesday’s rain.

Jim Laws of Miramichi Hunting and Fishing in Newcastle, Miramichi reported haring of only a few salmon scattered along the system.  Water temperature was good, but the rain Wednesday brought the rivers to the high side again.

Syd Matchett of Trout Brook Fly Shop on the Northwest Miramichi said angling was quiet with only a few reports of salmon and a couple of grilse on the upper part of the river.  A party on the Elbow Crown Reserve stretch reported a 20 pound salmon Sunday. The water temperature was perfect, but Wednesday’s rain would have brought up the levels.  Syd was one of seven rods that fished Sunday for four hours, but saw nothing.  Jim Lorentz hooked a salmon on the Little Southwest Friday evening.

Syd said we should be fishing by the weather rather than the calendar as it seems more like the end of May than the middle of June.  There have been several reports of Yellow Butterflies, which usually means that there are bright salmon in the system.  Syd wondered if the large number of icebergs around Newfoundland was keeping the water too cold for the salmon to migrate.

Debbie Norton of Upper Oxbow Outdoor Adventures on the Little Southwest Miramichi said they had just started fishing in earnest since Sunday and had seen a salmon jump on Tuesday.  The water was high enough then to boat to the pools, and is probably considerably higher after Wednesday.  |Although it was not moose season, they watched a moose swim the river in front of them.

With good weather forecast for the weekend and early next week, it is time to get out and “on the water”.

Thought for the Week: “No life is so happy and so pleasant as the life of the well-govern’d angler.” – Izaak Walton

Information on Lois Siegel’s work and a fascinating site with many more photos of ASF’s Fall Run Dinner are available here:
http://asf.ca/lois-siegel-and-asf-fall-run-dinner-2013.html