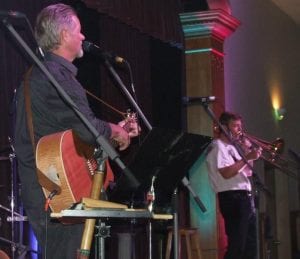 Miramichi’s Steve Heckbert will release his new CD, Walk to the World, at the third Annual Shadbangers Ball on July 25, 2014 from 7 – 10 pm at the Rodd Miramichi.

After having recorded his first release in 1982, Miramichi’s Steve Heckbert knew that songwriting and travelling were part of his very being. Steve, who currently lives in Houston, Texas made a commitment to himself that he would eventually release a trilogy of original compositions to follow up on the success of Bottoms Up.

In July 2012, at the inaugural Shadbangers Ball the first of his trilogy was released; in 2013 the second; and this year at the third Annual Shadbangers Ball – Old Home Night, Steve will fulfil his commitment to himself by releasing Walk to the World; an epic recording in true Steve Heckbert fashion.

Once again working with the talents of Jim MacDonald at the Packin’ Shed Sound Studio, Steve has assembled musicians from throughout New Brunswick and beyond to record his stories. Ray Legere, Steven Lifches, and Coco McGraw are just some of the names whose talent is featured on this album.

Steve is the quintessential Miramichi storyteller who spins yarns with his songs that are derived from the original style of the legendary Miramichi songwriters and storytellers from the time of the lumber camps – with a toe-tapping tempo. This album, once again, showcases Steve’s storytelling abilities and features original compositions with themes of a worldwide nature.

In true Steve Heckbert fashion, the release of Walk to the World will highlight the third Annual Shadbangers Ball – a mid-summer showcase of lively, original Miramichi music. The Shadbangers Ball will be an evening of rekindled friendships, wicked humour, and great music that will feature Steve and the 2014 edition of the Shadbangers, performing songs from Steve’s recordings. Added to the program this year are two of Miramichi’s finest, Singer songwriter Rob Currie and songstress and songwriter Melanie Ross.

For more information, check out www.steveheckbert.com. Tickets for the Shadbangers Ball are $15 each and available at Mac’s Seafood, 1780 Water Street and Saltwater Sounds, 1738 Water Street.