Again this week, we have a mixed bag as far as reports go.  One angler or angling area of 10 might just have hit a small wave of fish going through and felt angling was quite good.  On the other hand, the other nine reported almost nothing.  There still has been no great run, but periodically there are spurts of fresh going through.

Doug White’s Tammerack Sports Fly Shop in Juniper said the river here is in good shape. There are a few salmon running, no large amounts but the few people out are reporting hook ups. I’m afraid if everyone is waiting for returns like it was, they are in for a grave disappointment.

W. W. Doak and Sons in Doaktown said angling was a little slower than last week.  However, one camp above Boiestown did hook 17 fish in one day.  Another angler hooked seven fish last week, and a lady angler hooked a 38-inch (22 lbs.) salmon on a Cosseboom in the Doaktown area.  Water conditions were decent with temperatures in the 60s Fahrenheit in the a.m. and into the 70s by evening.  The height was good, although the tributaries could use a good splash of rain.

Flies of choice were Same-Thing-Murrays, Butterflies, Cossebooms and White-tailed Green Machines on no. 6 hooks and 8s above Doaktown.

Derek Munn of Ledges Inn in Doaktown and Mountain Channel in the Rapids area said angling was so-so with only the odd fish being caught, mostly in the cold-water pools.  Only a few fish were fresh.  Last Friday and Saturday there were a few caught at Mountain Channel as a small spurt went by.

Flies of choice were Shady Ladies, Smurfs, Same-Thing-Murrays, White-tailed Green Machines and Bombers in blue, and also brown and orange.

Herb Barry Sr. of Herb’s Fly Shop on the Station Road in Blackville said angling was very poor.  He had pout in nine hours on Monday and Tuesday and never saw a fish.    A couple had been hooked last week at “The Bench”.  The best fisher was an otter who came up in front of Barry with a small trout or chub.  The water conditions were perfect: there were just no fish.  Poor fishing produced good selling for flies as anglers were buying, trying anything.

Curtis Miramichi River Outfitting in Blackville said angling was pretty slow with only the odd fish being hooked.  Canoeing was great.  Water conditions were good.

Fly of choice was the White-tailed Green Machine.

George Routledge of George’s Fly Shop at the Mouth of Renous in Quarryville did not have a report as his wife Shirley was rushed to the hospital Saturday morning with George being at her side most of the time, coming home to sleep and eat only.  We all wish her well and have both she and George in our thoughts.

Jim Laws of Miramichi Hunting and Fishing in Newcastle, Miramichi reported angling as “not the best to say the least”.  Only the odd fish was being hooked, with the Main Southwest being the more productive.  The water was getting down and warming quickly.  A good rain is needed to freshen the system and hopefully bring in more fish.

Syd Matchett of Trout Brook Fly Shop on the Northwest Miramichi said angling there was very slow with the water getting down and quite warm.  Crown Reserve parties were averaging a total of three to four fish between four rods.  A week ago, Will Doyle hooked six salmon and a grilse over two days with one salmon being 31 inches long with a girth of 14 inches.  But since the weekend, there have been no reports of catching.

Hopefully, the thundershowers Wednesday evening will help cool off and raise the river.  This coupled with cooler temperatures in the immediate forecast should help to improve angling.  So plan to get out and “on the water”.

Congratulations are in order for Danielle Davis who will turn 15 this Saturday.   She was selected as one of 10 Canada-wide, (and only one of two in Atlantic Canada) by the Canadian Canoe Foundation to participate in an August 1-10 canoe-trip on the Bloodvein River in Manitoba.  The 10-day trip will focus on leadership, educational and environmental issues along with canoeing experience.  Davies was selected for her essay on the Miramichi River Watershed not meeting maximum spawning requirements.  Upon return, it is expected each participant will become involved in watershed activities.  Danielle attends Miramichi Valley High, likes to salmon fish, and is the daughter of Todd and Lisa Davies.

Thought for the Week: “The great charm of fly-fishing is that we are always learning.” – Theodore Gordon

The use of Crime Stoppers to report suspicious or illegal activity taking place in any type of fishing activity.

These tips are confidential and you may qualify for an award.

More information is available at the above link.

For urgent matters people can contact DFO at 1-800-565-1633 to report illegal fishing activity.

Thank you Doug and looking forward to seeing some more fish in the system.
Regards,

E-MAIL:
From MSA: Hi All

As mentioned last week, tropical storm “Arthur” took out the trap nets at Metepenagiag (Red Bank), and word that the gill nets were back in the river spread rapidly. Adam Augustine, the Director of Operations for Metepenagiag, has graciously offered some information on what is happening with their fishery. He said the Little Southwest trap net has begun operation as of Monday July 21st.  The Northwest trap was completed yesterday but will not be fished until after this evening’s rain.

“The gill nets were put back in the river on July 14th and removed on July 18th.  This was due to the fact that the both trap nets were destroyed by the hurricane Arthur.  Before the storm, the trap nets only produced 1 grilse for the community.  During the power outage after the storm, we had lost our store of farmed salmon from Nagmis First Nation.  Chief and Council felt that in order to provide salmon to our community while the traps were down that gill nets would be used for a limited period of 5 days.  Our trap net crew worked overtime and during the weekend to ensure that our trap nets would be back up and fishing as soon as possible.  Our community remains committed to conservation and ensuring that the large female salmon continue on their journey upriver to spawn.”

“At this time, we would like to announce that we have a new Director of Fisheries.  Bill Ward was recently elected to council and has been appointed by Chief and Council to assume the roles and responsibilities associated with the fisheries portfolio for Metepenagiag Mi’kmaq Nation.  He looks forward to working with Chief and Council to ensure that the management plan and vision that we have for our river is carried out and conservation is on the forefront.  He looks forward to meeting all of the other stakeholders in the Miramichi watershed.”

Thanks Adam for the update.

The MSA trap net has not been producing as we had hoped but salmon and grilse are being tagged for the adult assessment.

I have no official word from the Millerton and Cassilis traps but have heard Millerton had upwards of 50 fish on Sunday with numbers in the 20s Monday and Tuesday. Cassilis is in single digits I am afraid. I also have not received numbers from the Barriers for last week – will catch up next week. I did hear of people seeing and hooking fish throughout the watershed on the weekend so there appears to be a few waves entering the system.

Striped Bass
Just a reminder that a retention season for striped bass will open again on August 1st and run until the 21st. The retention limit is one fish a day with a possession limit of one – 50cm to 65cm size slot. Fishing will probably be best along the coast this time of year though we have reports of bass still being caught in the Southwest and Northwest Rivers and our trap near Chatham has been full of bass.

Proper Technique to Release a Salmon
Also with the warm water it is even more important to properly release your fish to ensure survival. To view a great video on the best techniques for live release go to Proper Techniques.

Membership
If you have not renewed your MSA membership for 2014 watch your mail box for your renewal notice. If you are not a member and would like to be please check out our web site at Become a Member.

And finally for those of you who have not visited us on Facebook I have attached a couple of pictures of some nice fish from our trap in Chatham. If you are on Facebook please “Like” us! 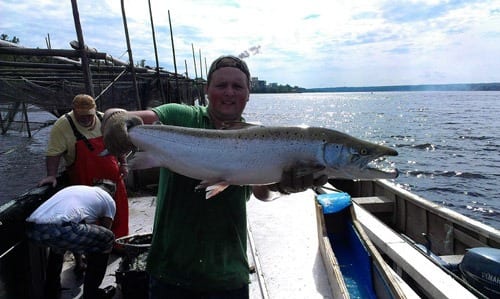 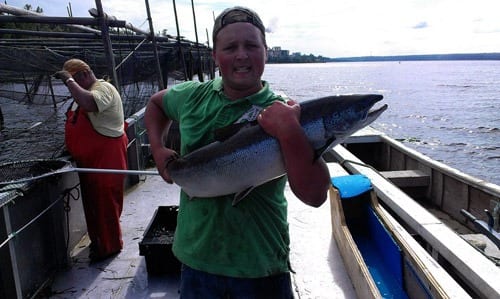 We fished 5 straight days, 13th to the 17th. We fished 2 to 3 pools a day from Doaktown to Blackville. From the Miramichi to the Cains to the Renous. Terrible is the greatest of understatements.

The finest speycasting fisherman and guide I know (west coast steelhead guide) was with us belting out 100’ casts flawlessly. Me and my other friend were hitting 80’ casts, 1 a minute, 60 per hour, in 4 hour increments, mornings and evenings (and some afternoons) the whole trip. We tried cossebooms, green machines, ally shrimp, sugarman shrimp, shady ladies, blue charms, undertakers, glitter bears, black bear green butts, and Christmas trees.

We caught nothing. Absolutely nothing.  3 guys with good proficiency, working harder than anyone we met up there and we did not connect with fish. (save 5 par and 3 chubs)

The other dozen plus people at the same lodge we were at the lodge had identical luck for the same days. We heard a father and his boy that had never fished for salmon before caught a grilse that week but not sure if they were at the lodge or if that was rumor from other establishments.

That’s our report. Spent $10,000 for three guys to fish 5 days and catch nothing. Dozen other people with the same story.

We should have tried Muskie instead, they are the fish of 10,000 casts and that would have been much, much easier.  We  fished in downpours, we fished in mosquito infested waters. We waded 100’ in if necessary. We fished every inch of the pools behind the museum, downtown Doaktown, the Orr pool and 7 others often multiple times.

Not sure we’ll be back to the Miramichi anytime soon as we’re broke and exhausted but we’ll see if morale improves in the coming months to give it another go next year. Thought you’d like the on-the-scene fishing report because what I saw isn’t matching what I hear. 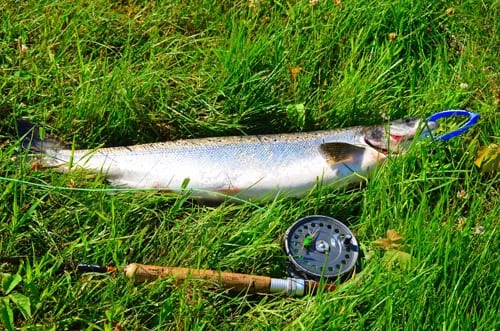 Grilse from Doaktown Saturday July 12. Caught in the morning and on the bbq Saturday night. That’s what fishing is all about and the real purpose of fishing – food on the table.