As per the last few weeks, there are only dribs and drabs of fish coming into the system each day.  If one is lucky enough to be in the right place at the right time, then maybe a fish can be hooked, but the few fish that are here are very choosy.  So the wait for the Fall Run (or any run for that matter) continues.

August is mackerel month, so don’t forget to throw a line for some of these.

Doug White’s Tammerack Sports Fly Shop in Juniper said there was no change from last week, no water, and no fish and unless someone is hiding the fact, there was no fish at all caught. It doesn’t look good.

W. W. Doak and Sons in Doaktown said anglers are picking up the odd fish here and there and water conditions are pretty good for this time in August.  There are not gangbusters in terms of fish, but the angler who regularly goes to the river will have expectation of fish and may be rewarded.

Flies of choice were smaller flies in patterns such as White-tailed Green Machines and Bombers such as blue & white and brown & orange.

Herb Barry Sr. of Herb’s Fly Shop on the Station Road in Blackville said there were no fish.  He has been putting in a lot of time on the river  and has only seen one very small grilse in the last week.  He was out Wednesday morning and said that eight rods in the Rapids area did not see a fish.  Even some of the camps up river were not seeing fish.  He said if he wanted fish, he’d have to cut his bologna into the shape of a fish and pretend.  Water conditions were perfect.

Flies of choice were Grizzly Kings, Bombers, Preachers, Undertakers and White-tailed Green Machines on no. 8 hooks.

Curtis Miramichi River Outfitting in Blackville said there were not many anglers out.  Those who were, were seeing some fish, but they were not taking well.    One canoer on Sunday saw three schools of fish moving through mid afternoon, and saw a few jumping.  Water conditions were very good.

George Routledge of George’s Fly Shop at the Mouth of Renous in Quarryville said angling was very quiet with only an odd report of a fish being hooked.  The water was getting low and could use a boost.  George said he might be back in his shop by the weekend, or on Monday for sure.

Jim Laws of Miramichi Hunting and Fishing in Newcastle, Miramichi reported very slow angling with only an odd report of success.  Water conditions were good and rain today should help improve them.

There were no reports of Striped Bass being caught here or up river, but below Neguac fishing was much better.

Syd Matchett of Trout Brook Fly Shop on the Northwest Miramichi said angling was very quiet and the water level was getting down.  He said rain expected today should improve conditions.  Very few local anglers were on the river.

A spokesperson for Debbie Norton of Upper Oxbow Outdoor Adventures on the Little Southwest Miramichi said fishing was quite slow with very few fish being caught.  There were a few being seen, but they weren’t interested in taking a fly.  The water conditions were adequate, and rain today will certainly help them improve. 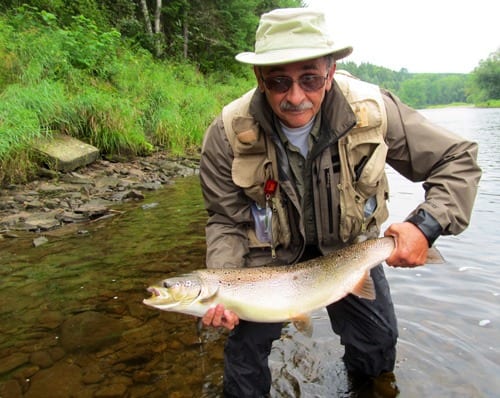 Peter Clark with a 22 pound salmon caught on a chartreuse bomber, number 4.

An e-mail from Peter Clark noted that he and his wife Sylvie and caught 4 Salmon each on August 4, with seven of the eight caught on his original green Burdock.  One fish Peter caught was a Salmon weighing 22 pounds.

So with some rain in the forecast conditions should improve and maybe, just maybe, bring in some more fish so we can get out and “on the water”.

Thought for the Week: “Most fishermen swiftly learn that it’s a pretty good rule never to show a favorite spot to any fisherman you wouldn’t trust with your wife”   John Voelker

Condolences:  Our thoughts and prayers go out to George Routledge on the death of his wife Shirley who passed away this passed week.  George you are in our thoughts!

Refreshments and light snacks will be served, and there will be a brief program including a reading by the author (introduced by Wayne Curtis) as well as a book signing opportunity.

With almost 400 pages of stories, photos and historical information about the Salmon Museum’s Hall of Fame inductees, this hard-cover book honors the 128 men and women from the Miramichi Valley and beyond whose lives – and livelihoods – revolved around “the River.” It’s sure to be something you’ll want to keep close by and definitely a book that will make a wonderful gift for someone with “roots” in or fond memories of the Miramichi.

160 Years of Salmon Stories will be on sale for $60 with all profits going to the Atlantic Salmon Museum.  Society members will also be available to take orders for additional copies.  Note:  If you have already reserved a copy, now is the time to drop in and pick it up.  For more information, please contact any of the following members of the Historical Society:  Valerie O’Donnell (365-7924); Ann Storey (365-4529); Karen Swim (365-1105) or Peggy Green (365-7847).

HOPE TO SEE YOU THERE !

For further information and/or tickets, please contact the Museum at 506-365-7787, email , or visit their website at www.atlanticsalmonmuseum.com.

There are reports of fish being seen throughout the system though mostly in pools where it is expected that they would be holding up. Water temperatures did get above 20 at all three monitoring stations (SWM at Doaktown, NWM at Trout Brook, LSW at Upper Oxbow) this past week but with the cooler weather and rain they have all dropped to minimums of 15 and lower.

DFO publishes the Northwest and Millerton trap and the Northwest barrier numbers on their website as of the middle and end of each month. The cumulative numbers as of the end of July are shown below. You can find a link to this site on our Home Page under Quick Links.

Cumulative counts to date of Salmon as of July 31 2014

Cumulative counts to date of Grilse as of July 31 2014

(* indicates fewer than 5 years are available to calculate the mean)

The Northwest and Dungarvon barriers showed a slight increase in numbers this past week with 9 new fish coming into the Dungarvon Barrier and 11 new fish finding their way to the Northwest.

Dungarvon Barrier as of August 3rd 2014

Northwest Barrier as of August 3rd 2014

With numbers so low I will take this opportunity to encourage everyone to hook and release your catch. I have attached a picture that has been shared on Facebook and I point you to a great video on the proper techniques – http://www.miramichisalmon.ca/proper-techniques-for-live-release-of-atlantic-salmon/

I wanted to send a further reminder in case you missed it last week – DFO announced on Thursday that the hook and release fishery on the Northwest Miramichi would continue to the end of the season. The variation order can be found at http://www.inter.dfo-mpo.gc.ca/Gulf/Orders-Registry/Report?order_id=3835.

Fishing at the Chatham trap net ended on July 31st; we were able to tag 161 adults (80 grilse/81 salmon) this year. Electrofishing has begun, with our two field technicians focusing this week on the areas upstream of beaver dams that had been removed last year. We will continue to electrofish for the remainder of August, and move our focus to finding suitable habitats for stocking and determining stocking success from previous years. In the fall we will ramp up with our 2nd year of beaver dam removals and begin collecting broodstock to spawn at the hatchery.

The retention season for striped bass is still on and will run until August 21st. The retention limit is one fish a day with a possession limit of one – 50cm to 65cm size slot. There are bass in the river so it is a great opportunity to fish them again.

The missing satellite tag was returned to us this week – unfortunately the fish died but we are very happy to have retrieved the tag. All of the data will be downloaded and the tag can be refurbished and used again next year.  Thanks to everyone who shared the story on Facebook and spread the word.

The 19th Annual Fredericton Conservation Dinner is taking place Tuesday, September 16th at Fredericton Inn, where we are again honouring an individual who has served the cause of salmon conservation with great distinction.  It is both a pleasure and an honour to receive the Hon. Keith Ashfield, Member of Parliament for Fredericton and past Minister of Fisheries and Oceans Canada as our special guest, and we look forward to his message regarding the importance of the wild Atlantic salmon to New Brunswick, both in economic and environmental terms.