Last weekend’s rain produced a fresh batch of water and seemingly, a little bump of fish. It also made the older fish in the system more active. With the trapnets up as a preventative measure, there has been no actual numbers recorded so we are back to a hope mode as this should normally be the start of a Fall run.

Doug White’s Tammerack Sports Fly Shop in Juniper said the river is producing a few salmon again but few grilse. Don’t hear much from the South branch but the North branch seems to be producing some strikes. The water has come up a little and it’s a cooler temperature than it was.

W. W. Doak and Sons in Doaktown said river conditions were very good with temperatures in the low 60s Fahrenheit at the end of the day. The water had come up a good six feet in the Blackville area and about four in the Doaktown vicinity, but was dropping nicely. Anglers were picking up a few fish starting Monday, and some of the up-river camps reported decent fishing after the rain. Generally, there was a good mix of salmon and grilse, and even some bright fish. The Main Southwest was over all fishing better than the Northwest and Little Southwest.

Derek Munn of Ledges Inn in Doaktown and Mountain Channel in the Rapids area said they were picking up a few fish, but no great amounts. Generally, it was not the best, but decent. Three rods hooked eight on Sunday (mostly salmon, and not bright) and a few on Monday. A little bump of fish went through Sunday and Monday. Water conditions were quite good both in height and temperature. David Bishop was giving a spey-casting clinic to five anglers. 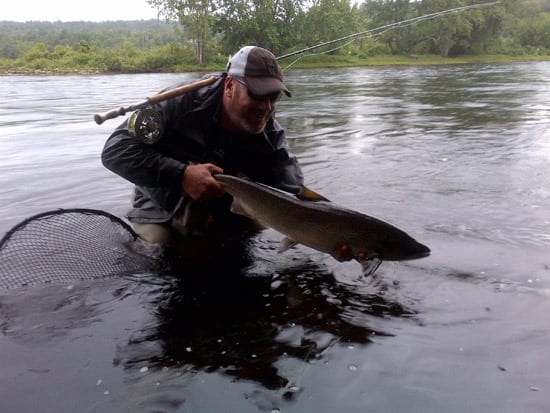 David Bishop from Cascapedia Quebec with one of 3 salmon he hooked Sunday evening. Dave has been at Ledges doing a Spey casting clinic all week, where everyone is having a great time learning the art of Spey casting and catching a few fish to add to the experience.

Herb Barry Sr. of Herb’s Fly Shop on the Station Road in Blackville said angling was still slow, but anglers were seeing some fish. Several were observed jumping in the Rapids area. The water was a bit high, but fishable. The only angler having success was a Bald Eagle.

Flies of choice were White-tailed Green Machines, Grizzly Kings, and a few Killer Whiskers on no. 4 & 6 hooks.

Curtis Miramichi River Outfitting in Blackville said the water was up a bit, but the temperature was good. Anglers were picking up some fish, but no big amounts. One angler hooked three, landing one. Canoeing conditions were perfect.

Flies of choice were L.T. Specials, Glitter Bears, White-tailed Green Machines, Ruellands, and some Fall patterns and a few Bombers, with more likely when the water drops.

George Routledge of George’s Fly Shop at the Mouth of Renous in Quarryville said he was officially back into his shop early this week. The water in Quarryville was a bit high, but fishable. With the forecast for sun through the weekend, conditions should be perfect. There were no reported catches, but there were no anglers out. He’d heard of some fish hooked in the Blackville area this week

Jim Laws of Miramichi Hunting and Fishing in Newcastle, Miramichi reported poor angling with only the odd fish being hooked. Water conditions were described as good, especially with several days of decent weather on the horizon.

Today is the last day for Striped Bass retention. There have been very few hooked in the Miramichi area, but further down river angling has been decent.

Flies of choice were White-tailed Green Machines, some Fall patterns and a few Bombers.

Syd Matchett of Trout Brook Fly Shop on the Northwest Miramichi said the report was a little better this week than in the past few. There were a few fish being hooked. He’d heard of a couple of bright salmon and a grilse being hooked. Early in the week the water was unfishable, but has started to drop, and should be very good for the weekend.

Flies of choice were Yellow Butterflies, White-tailed Green Machines and Shady Ladies on nos. 2 & 4 hooks. By the weekend it should be good to use 4s & 6s.

Debbie Norton of Upper Oxbow Outdoor Adventures on the Little Southwest Miramichi said they picked up a few fish for a change. Joe Smith from St. John, NB caught a salmon on a White-tailed Green Machine and Paul Elson Jr. hooked two fish Sunday. The water was spring-high early week, but starting to drop.

With good weather in store for the weekend, conditions should be close to perfect. Hopefully we may soon see the start of a Fall Run, so get out and “on the water”. 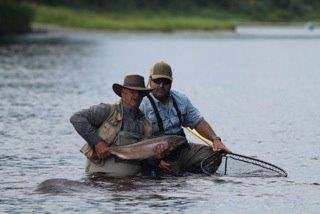 Ledges guide Dan Despres and Terry Cox with one of the many salmon Terry and his wife Trudy hooked while at Ledges.