In case you missed it, DFO has announced today that the hook and release fishery will continue on the Northwest until the end of the season. In 2013 the Northwest reached only 39% of its conservation limit – and numbers at the Cassilis trap and Northwest Barrier have been very low this year. 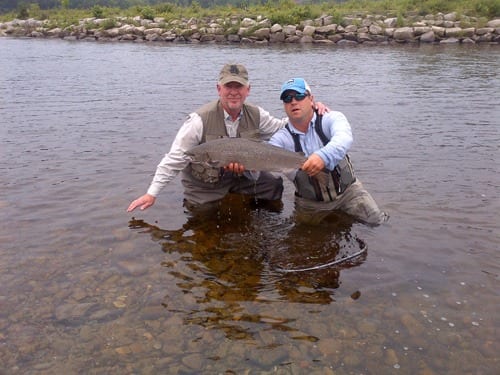 Moncton, NB – July 31, 2014 – Fisheries and Oceans Canada wishes to inform the public of important changes in the management of Atlantic salmon recreational angling on the Northwest Miramichi River system in New Brunswick.  The management changes are the following: The maintenance of the catch and release measures on the Northwest Miramichi River system;

From August 1 until the end of the season, catch and release will be mandatory in the Northwest Miramichi River system and its tributaries upstream from the Red Bank Bridge on Route 425.

The management measures announced today will help with the efforts of achieving conservation objectives for Atlantic salmon on the Northwest Miramichi River system in New Brunswick.

Much like most reports this season, there are only trickles of fish entering the system.  However, anglers are seeing more this week although the daily counts have changed little.  The second Striped Bass retention period lasts until August 21.

Doug White’s Tammerack Sports Fly Shop in Juniper said this week was the same old report from last week. The river is very low and the few fish around are reluctant to take. Most coming into the shop are after a few Pan fish, BUT people are still fishing.  Hopefully, it will be better.

W. W. Doak and Sons in Doaktown said angling was slow, with only a few fish being hooked.  One angler did catch a 25-pound salmon and a grilse this past week.  Generally, anglers are seeing a few more fish than last week, but they are not particularly in a taking mood.  Rain Wednesday freshened the river and gave a slight raise in water.

Derek Munn of Ledges Inn in Doaktown and Mountain Channel in the Rapids area said angling was decent on the weekend.  They had hooked six fish between four rods.  There seemed to be a trickle of fish moving through Mountain Channel where they were seeing a few, at least enough to keep anglers interested.

Flies of choice were Green-butt Bear Hairs, Preachers, Undertakers and Bombers in brown & orange, and blue all on no. 8 hooks.

Herb Barry Sr. of Herb’s Fly Shop on the Station Road in Blackville said angling was not good, but certainly better than the last few weeks.  Anglers were seeing some fish and catching the odd one.  He said he had seen a total of seven fish through June-July, but saw eight on August 1, so that was certainly an improvement. One was a large salmon which Barr described as “needing three horses to pull it up the hill.  It was the largest I have ever seen”.  The water was a good height and decent temperature.  Some of the grilse caught were quite small (micro-grilse as they are now being called) while some were nice weight in the 4-5 pound range.  Of the fish hooked, there was a good mix of salmon and grilse.

Curtis Miramichi River Outfitting in Blackville said anglers were catching the odd fish, but at least they were seeing a few more.  Some were very small grilse.  One angler hooked a grilse Tuesday on a Chief Needabah.  Water conditions were good for the time of year.

George Routledge of George’s Fly Shop at the Mouth of Renous in Quarryville was unavailable for comment as both he and his wife are in the hospital.  Our thoughts go out to both of them.  The general consensus is that there are very few fish as one rarely sees more than a couple of anglers fishing there.  The Renous is also very slow.

Jim Laws of Miramichi Hunting and Fishing in Newcastle, Miramichi reported slow angling again this week with only the odd fish being hooked.  Water conditions were decent for the time of year.  Although the second Striped Bass retention period (August 1-21) is now here, he had no reports of bass being caught.  Unlike the first retention period which was primarily for the Miramichi area, this period is more spread out across the Gulf Region as the fish have spawned and have moved out to the various rivers before returning late September/October.

Flies of choice were White-tailed Green Machines and Blue Charms on no. 6 hooks.

Syd Matchett of Trout Brook Fly Shop on the Northwest Miramichi said angling was very quiet locally.  However, the Crown Reserve Stretches were producing average fishing.  He was part of a party of four last Friday-Sunday at the Crawford who hooked a few and seen some.  The party following them hooked three salmon and three grilse.  Matchett heard of two hooked at the Depot and four at the Narrows.  The headwaters had a raise of seven inches and temperatures were decent in the 62-64 Fahrenheit degree range.

Flies of choice were Shady Ladies and Undertakers along with a few Bombers.  Syd said that they got a lot of raises on Bombers, but no takers.  The party after them did get a few on Bombers. (Agitatingly, I asked Syd if he was saying that he didn’t know how to fish Bombers.  He laughed and said he’d have to get instructions from Dave Ingersoll)

Debbie Norton of Upper Oxbow Outdoor Adventures on the Little Southwest Miramichi said they were at least seeing the odd fish, even if they were not catching them.  Her guests were fishing pan-trout, but not in the river.  Water conditions were decent for August.

Flies of choice were Yellow Butterflies and White-tailed Green Machines.

So put on your “Hope Helmets” as we await a Fall Run to rescue the season.  Then we can get out and “on the water”.

E-Mail:  One angler wrote:
Hi Doug,  as always I appreciate your report.  I thinks it’s great the portion from Newfoundland that provides insight to the enforcement and poachers being caught. I live and fish on the LSW and with it being closed I have to admit that I am very disappointed to have only seen one DFO truck on the river, I fish day in, day out.  It would be nice to get updates about the enforcement for New Brunswick.  Best regards,

ASF RESEARCH BLOG – Searching for Needle in a Haystack
How do you search for a single Atlantic salmon in the Miramichi River? Read on:
http://asf.ca/research-in-the-field.html

Note: Go to ASF RIVERNOTES this week for a link to the latest DFO listings of closed rivers.