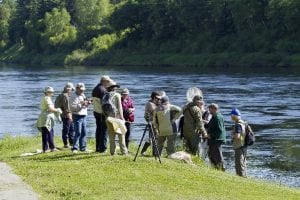 Naturalists, Northwest Miramichi – a group of naturalists from across NB, including members of the Miramichi Naturalist Club were observing dragonflies at the Blackville Municipal Park with Parks Canada entomologist Denis Doucet, June 2013, during the Festival of Nature hosted by our club. Of particular interest was a rare species of Pigmy Snake-tail dragonfly.

If you’re a Miramichier, count yourself lucky! As you can see from the photos, we’re surrounded by so much of the natural world, and have wonderful opportunities to learn about it and appreciate it by exploring and sharing our experiences.

If you want to enjoy the company of individuals with similar interests, join the Miramichi Naturalists’ Club (MNC). The club, with an average membership of 25 people, meets on the second Monday of the month, September through June at the Nelson Senior Citizens Club, Sutton Road, at 6:30 pm.

Following the presentations, we have social time and informal business meetings to discuss topics of mutual interest, plan outings and share wildlife sightings. Recent field trips were an “Owl Prowl”, birding at Hay Island, Chimney Swift monitoring in Bathurst, and participation in the Botany Club of NB’s native orchid field trip in Janeville in late June.

Interested club members can also participate in the Christmas Bird Count in Miramichi and Red Bank, and monitoring the flora and fauna around Miramichi Marsh and other areas such as Strawberry Marsh and French Fort Cove.

Non-members are welcome to attend the monthly meetings to find out more. The events calendar and other information are available at the club’s website at miramichinaturalistclub.wordpress.com. Please consider joining the club. The nominal annual membership is $20 per individual or $30 per family.

The Northern Saw-Whet owl is one of the owls that are sought out during the “Owl-Prowl” – an annual National Nocturnal Owl survey with Bird Studies Canada. They are of course found in the forests in the Miramichi region.

The Showy Lady’s-slipper was photographed in Red Bank. This is a rare woodlands orchid, related of course to the Pink Lady’s Slipper found in many locations. It likes a wet boggy woods.

The Bronze Copper was photographed two years ago at Miramichi Marsh, Chatham. This is the first record for this species in this part of NB. This photo was taken as part of the Maritime Butterfly Atlas Project which is in its fifth and final year. Some of the MNC members are taking part in this survey.