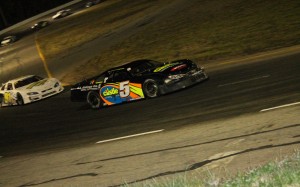 Brudenell, PEI’s Jonathon Hicken was the class of the field Saturday night as he started on the pole and dominated the ‘Chi City Showdown Pro Stock 125, leading every lap en route to winning the first Pro Stock race in over 15 years at the track known now as Speedway Miramichi.

The race run under the lights was incredible to watch as fans witnessed a great clean race as all 125 laps went caution free-proving the talent that was in the field of drivers for Saturday night’s race. Lonnie Sommerville of Saint John finished 2nd, while Farmington, Maine’s Cassius Clark drove to a 3rd place finish. Cole Boudreau and Miramichi’s own Brady Creamer rounded out the top five. Hicken, and Dylan Gosbee took the 10 lap heat races.

The race was the result of hard work from track owner Jason Carnahan to bring the Pro Stocks back. Fourteen cars came to the track ready to race Saturday, with drivers from all over Atlantic Canada in attendance. The race saw lots of intense side by side racing, resulting in one of the best races the speedway has seen in a long time. Fans were impressed by the great action, and drivers were impressed with the track and facility. Everyone was surprised by the caution free race, as caution free races are rare.

O’Blenis also won the NB Big Dawg Challenge, a points series between Miramichi and Petty Raceway near Moncton. The Bandaleros also put on an awesome show, as the kids who are between the ages of 8 and 16 had tight racing all throughout their 30 lap feature. In the end, Shubenacadie, NS’s Braden Langille won the feature, and the Big Dawg Challenge. Levi Rossiter finished 2nd, and Lyttleton’s Ashton Tucker picked up a 3rd place finish in front of the hometown crowd!

Friday night was highlighted by the Sportsman 100! What a race that was, as 12 Sportsman cars took to the track! Similar to the Pro Stocks, it was a very clean race, featuring just one caution which was on the first lap for a few cars spinning around. Devin Snell of Saint John, who won the 100 lap race at Petty the week before, picked up where he left off winning the race in dominating fashion. His teammate Bill Sommerville finished 2nd in his final career race. Dave O’Blenis finished 3rd. Snell and Luc Bourgeois won their heat races.

In other action Friday night, the Atlantic Modified tour ran their penultimate race of the 2014 season under the lights, as Robert Miner scored his 1st career win on the tour. Joe Hoyt and Tom Betts rounded out the top three. In Eastern Super Mini Cup action, Amanada Wheatley picked up the feature win, sweeping the season in Miramichi, and winning the series championship. Chris Wilson of South Esk, and Derek Goodwin of Renous rounded out the top three. The 4 Cylinders were also on track Friday, as JR Lawson won the race and claimed the NB Big Dawg Challenge. Brad Daley and Timmy Blakely rounded out the top three.

The next event at Speedway Miramichi is October 18th. That will be the 2014 finale, and will feature the Monster Eliminator demolition as well as 4 Cylinder racing! Be sure to catch the final event of the 2014 season!