First, a reminder that starting Tuesday September until Saturday September 27 the annual Moose Season takes place in NB.  So if you are out, it is advisable to wear some Hunter Orange so as not to be mistaken for a “Swamp Donkey”.  Maybe one should avoid using flies tied with moose hair as some crack shot may have a sight on it.

Although not the news we have been waiting for as in a “Fall Run”, there are more positive reports of at least some fresh fish moving into the system earlier this week, so at least one can go to the river with an expectation of maybe hooking into a fish.

However, we have been bombarded with several news stories this week about the very low numbers of returning salmon and grilse, not only here on the Miramichi, but across Atlantic Canada.  I’ll provide a link to the stories below.

Doug White’s Tammerack Sports Fly Shop in Juniper said this will be his final report. There’s no water and no fish and the season was over on that stretch Monday. Better luck next year.

W. W. Doak and Sons in Doaktown said they were hearing of some bright fish, and generally, reports were better than the past few weeks.  It seemed small numbers of fish were moving through in as much as a pool might be empty in the morning, but have a number of fish later.  It was starting to look as if there might be a few fresh fish for Fall angling.

Derek Munn of Ledges Inn in Doaktown and Mountain Channel in the Rapids area said angling was Still pretty slow there.  They were seeing good numbers of fish in most of their pools but not hooking many.  They were landing 2 or 3 a day and they’re still old fish.  They were not seeing many fresh fish yet. The water was a very good temperature but getting low.
Mountain Channel was seeing a few fresh fish everyday and hooking the odd one, but for the most part it was still slow there as well.

Flies of choices have been small wet flies, and blue and white bombers, and a few fish on small shrimp patters. 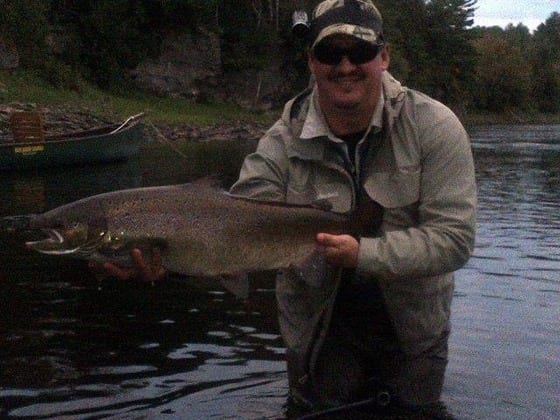 Derek Ness with an 18lb salmon caught on a small Cossaboom

Herb Barry Sr. of Herb’s Fly Shop on the Station Road in Blackville said he had heard of a few fish going, but no big run.  Some fresh fish were being caught.  These were mostly hen fish.  The water was getting low, but it was a very cool temperature.

Flies of choice were anything with colour such as Ally’s Shrimps, General Practitioners, Orange Blossoms and Orange Blossom Specials.

Curtis Miramichi River Outfitting in Blackville said there were some fresh fish and a decent amount of catching.  Generally, there was a mix of salmon and grilse, but there had been a couple caught in the 20-pound range.  Canoeing conditions were good.

George Routledge of George’s Fly Shop at the Mouth of Renous in Quarryville said anglers were starting to hook the odd fish here and there.  There had been a salmon hooked Monday morning and two grilse lost the same evening.  However, on Tuesday morning one experienced angler fished from 7 am to 1 pm with the right tides and saw nothing.  The water was a tad low, but the temperature was very good.

Jim Laws of Miramichi Hunting and Fishing in Newcastle, Miramichi reported a host of terrible reports.  Most anglers have given up for the season.  ^The only positive was that water conditions were good.

Perhaps salmon anglers might have some satisfaction this coming week as the third Striped Bass retention period comes into effect from September 24 to September 30, 2014 with a limit of one per day with the retention length between 50-65 cm.  However, according to most bass anglers, the retention period would be better suited to mid October.

Flies of choice were Bombers and Fall patterns.

Syd Matchett of Trout Brook Fly Shop on the Northwest Miramichi said angling was quiet, but a few more anglers were out than in previous weeks.  There were no great reports with only a very odd fish being hooked.  Water conditions were a bit low, but nice and cool.

Debbie Norton of Upper Oxbow Outdoor Adventures on the Little Southwest Miramichi said they were seeing a few fish and had hooked one Tuesday.  The water was getting a bit low, but the temperature of it was quite good.

Flies of choice were Blue Bombers and some Fall patterns.

With the Fall foliage beginning to change, it is time to get out and “on the water”.

Thought for the Week: “When you are on the river, ocean or in the woods, you are the closest to the truth you’ll ever get.”  Jack Leonard

Click here for the state of Atlantic Salmon story.

E-MAIL: from Wilbert Savoy  (Sure wish we had something similar here!)

The sockeye in the Fraser are even thicker than these. I was up in Salmon Arm on Thursday and the rivers are full with bright red fish with it just starting up there. The bulk of the run won’t show up on the rivers until another two weeks. This was sent by a friend of mine up in Campbell River, they’ve never seen this many in the river, Ever! Too bad all those fish farms are killing off the fry as they migrate out to sea. I would hate to see how many there would be if they weren’t there. Tough argument for the huggers to use when it’s like this all over the coast.

Subject: Salmon Run in Campbell River
The Pink salmon keep coming here. They estimate there’s 1.3 million sitting in the Campbell River. Shawn swam the Campbell River on Thursday to do a count and he said it was solid fish from top to bottom. The hatchery has counted 280,000 through at the counting fence on the Quinsam River and it’s still packed below the fence. Lots of tourists here that are amazed by the number of fish and the Chinook and Coho haven’t started yet. Definitely a bumper year for salmon. He guided at Painters Lodge this morning and sent this picture of a 25 lb Chinook. He said they got 4 Chinooks… 25, 17.5, 12 & 10. 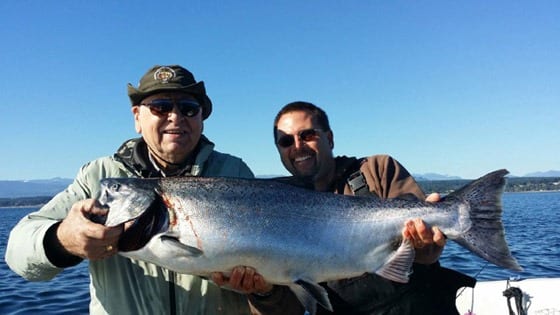 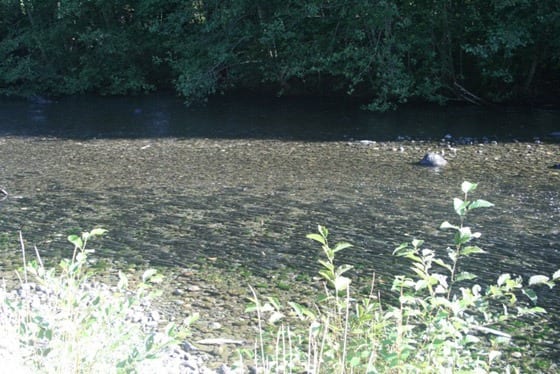 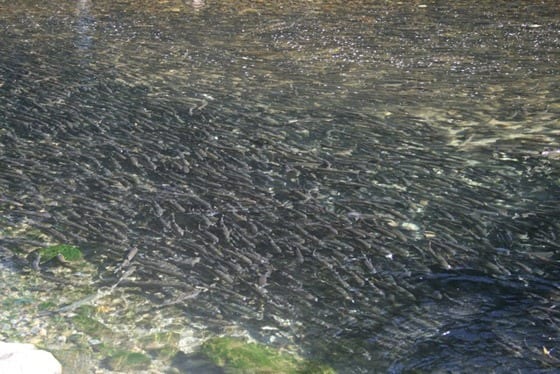 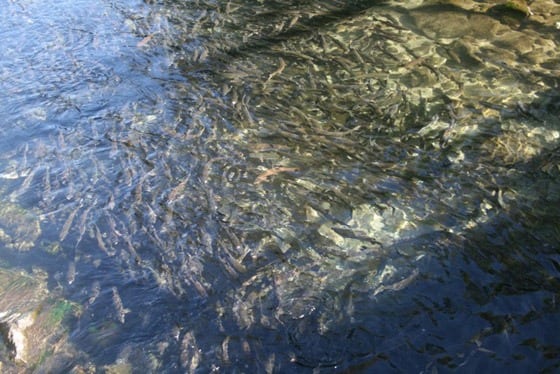 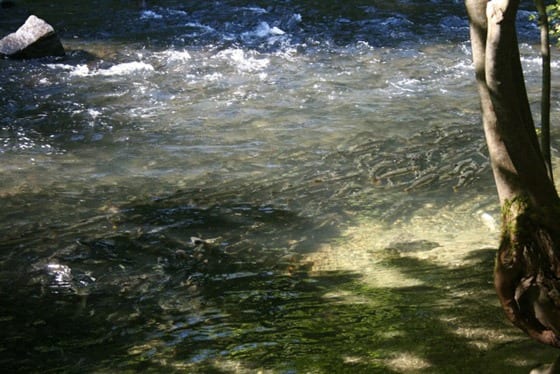