In addition to the dinner, there will be both a silent and live auction taking place.  Items will include exclusive access to prime waters for the 2015 fishing season, various types of rods, reels and other equipment as well as limited edition paintings and artwork.

The inductees to the 2014 Hall of Fame are as follows:

Raymond Wells Woodill of Riverview, NB.  Raymond is a life time member of the Miramichi Salmon Association and a true ambassador for educating people on the importance of hook and release and conservation.  He is being inducted in the Angler category.

Robert Baker of Bathurst, NB. Robert has been the president of the Nepisiguit Salmon Association since it was formed in 1976 and has held monthly meetings in his home for over 35 years. The restocking of salmon to the Nepisiguit River can be largely credited to his efforts and dedication.  He is being inducted in the Conservationist category.

Merlin & Leslie Palmer of Parker’s Ridge, NB. Merlin and Leslie have operated and been caretakers for the Burnt Hill Fishing Club since 1957. They embody true “Miramichi hospitality” and have hosted dignitaries from all over the world including US Presidents and the Prime Minister of Australia. They are being inducted in the Operators category.

Doug Underhill of Miramichi, NB.  Doug has authored 12 books, many of which encapsulate the pride, history and enjoyment of the Miramichi.  He is also very well known for his weekly column, the “Miramichi Fishing Report”.  He is being inducted in the Outdoor Writer category.

Wavell Price of Priceville, NB.  Wavell, an avid fisherman and flytyer, was well known up and down the River for his many years of guiding.  Having guided for several outfitters including Pond’s and Sutter’s Lodge, he became head guide for life-long fishing enthusiast, Don Byrne.  He is being inducted posthumously in the Flytyer category.

For more information on the inductees and to reserve your tickets for the dinner, please contact the museum at 506-365-7787 or by email at , or visit our website at www.atlanticsalmonmuseum.com. 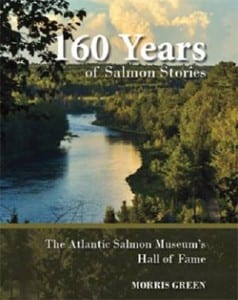 Where: ATLANTIC SALMON MUSEUM, 263  Main Street, Doaktown
When: SATURDAY, SEPTEMBER 6, 2014 – beginning at 1:00 pm
(refreshments and light snacks will be served)

With almost 400 pages of stories, photos and historical information about the Salmon Museum’s Hall of Fame inductees, this hard-cover book honors the 128 men and women from the Miramichi Valley and beyond whose lives – and livelihoods – revolved around “the River.” It’s sure to be something you’ll want to keep close by and definitely a book that will make a wonderful gift for someone with “roots” or fond memories of the Miramichi.

160 Years’ of Salmon Stories will be on sale for $60 with all profits going to the Atlantic Salmon Museum.  Society members will also be available to take orders for additional copies.  Note:  If you have already reserved a copy, now is the time to drop in and pick it up. For more information, please contact any of the following members of the Historical Society:  Valerie O’Donnell (365-7924); Ann Storey (365-4529); Karen Swim (365-1105) or Peggy Green (365-7847).

HOPE TO SEE YOU THERE ! 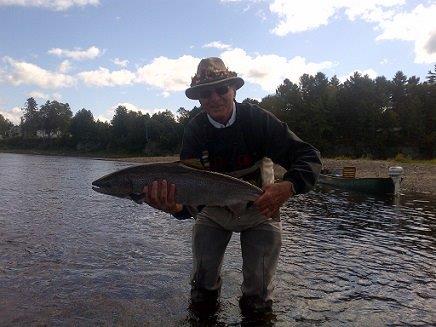 MIRAMICHI – There has been no great change since our last report.  There are a few fresh fish coming in each day, but in no significant numbers, and this is more prevalent on the Main Southwest than on the Northwest.  Water conditions are quite good over all.

Doug White’s Tammerack Sports Fly Shop in Juniper said there wasn’t much change up here at the headwaters. The water was up a bit but still not where we’d like it. Not much in the way of fishing but a few are still pounding the beat and there are still fish being hooked. At least there is no crowding at the pools, lots of room for everybody. Perhaps we will still have a fair fall run.

Flies of choice: Cascade, GP’s, and several other shrimp patterns.

W. W. Doak and Sons in Doaktown said there were a few fish around, including a few fresh fish, but not many.  One camp above Doaktown caught 10 last week, nine of which were salmon.  There were reports of some fish being seen around the Howards area on the weekend.  One angler hooked two salmon on Saturday.  Most anglers who went to the river saw fish, hooked one, or were with others who saw or hooked fish.  That said, there are not a lot of anglers out.  The river levels are good, but creeping down, and a good rain would be welcomed.  Temperatures were good.  Over all it is a bit slow, but considering the time of year, the catching is average.

Flies of choice were Same-Thing-Murrays, Blue Charms, White-tailed Green Machines, and Bombers.  (One camp was catching most on Bombers).

Derek Munn of Ledges Inn in Doaktown and Mountain Channel in the Rapids area said the fishing has been slow the last week or so.  The river is starting to get low in our area. Looks like some rain for Saturday but the last few forecasts that were calling for rain in our area missed us to the south or the north. We are seeing some fish but they’re not taking very well. At Mountain Channel the river is at a perfect level and water temperature is good.  There just aren’t not many fresh fish coming in.  Looks like cool weather after Sunday so let’s hope that will turn things around.

Flies of choice were small #10-#12 wet flies and small bombers in brown & orange and blue & white.

Herb Barry Sr. of Herb’s Fly Shop on the Station Road in Blackville said there were very few fish around, with only an odd one being hooked.  He was told one which was caught had sea lice.  Water conditions were very good with the only problem being the lack of fish.

Curtis Miramichi River Outfitting in Blackville said there were reports of a few bright fish on the weekend, but generally there were only a few fish around.  Water conditions were good in terms of height and temperature.  Canoeing conditions were also good.

George Routledge of George’s Fly Shop at the Mouth of Renous in Quarryville said there was not much to report except there were no fish.  At one time on the weekend, there were eight rods in the water with the result being zilch caught.  A few were seen, but nothing was taking.

Jim Laws of Miramichi Hunting and Fishing in Newcastle, Miramichi reported very few fish around and low counts at the barriers, and low numbers of smolt making it out of the river in the spring.  Present water conditions are quite good.

Flies of choice were mostly Fall patterns such as Ally’s Shrimps, General Practitioners and Copper Killers along with some Bugs and Bombers

Syd Matchett of Trout Brook Fly Shop on the Northwest Miramichi said angling was slow with only a few fish showing mid week.  A couple had been hooked at both the Depot and Crawford Crown Reserve Stretches, but this was nothing spectacular.  Ken Kingston did hook a fresh grilse last Thursday.  Over all, there were very few anglers and very few fish, and what were there were not interested in taking.  Water conditions were very good.

Debbie Norton of Upper Oxbow Outdoor Adventures on the Little Southwest Miramichi said catches were few and far between, although a novice lady angler did catch a pretty big chub.  Needless to say, there was at least some excitement.  Water conditions were good.

Again this week, angling is presenting a challenge which makes the rewards , when they do happen, even more enjoyable.  Let’s hope with everything a month late this season, that the Fall Run fits into that time-frame so we can get out and “on the water”.

Thought for the Week: “Fishing is a way of rediscovering the true beauty of life.”  John Hemingway (grandson of Earnest Hemingway) from an article which appeared in Moncton

ASF Research Blog update – Read the latest update from the world of ASF researchers, including dealing with a dam under repair.
http://asf.ca/research-in-the-field.html 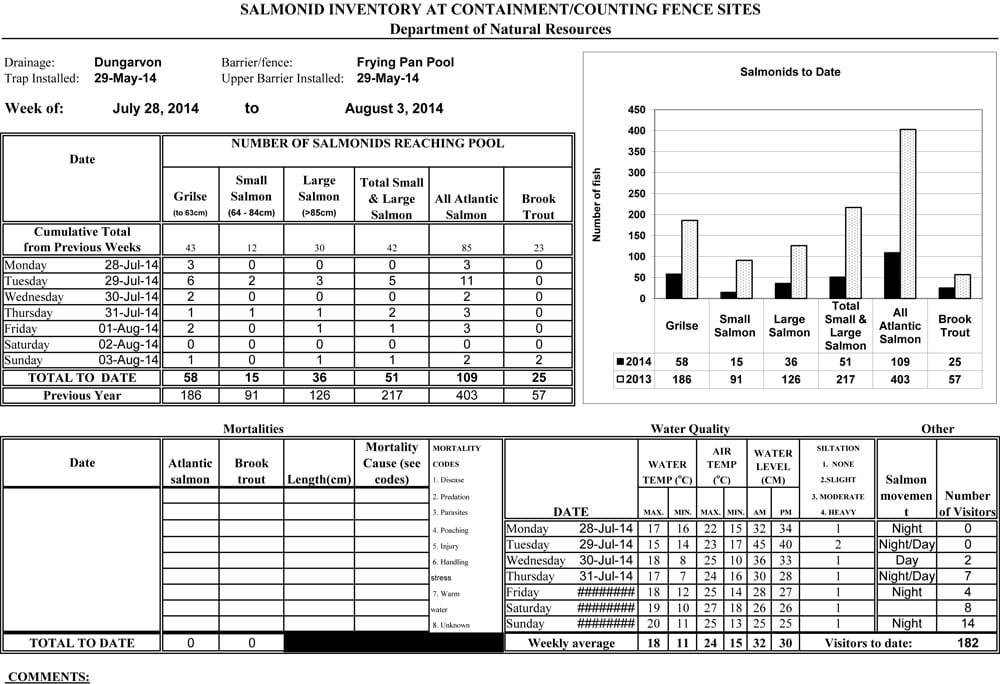 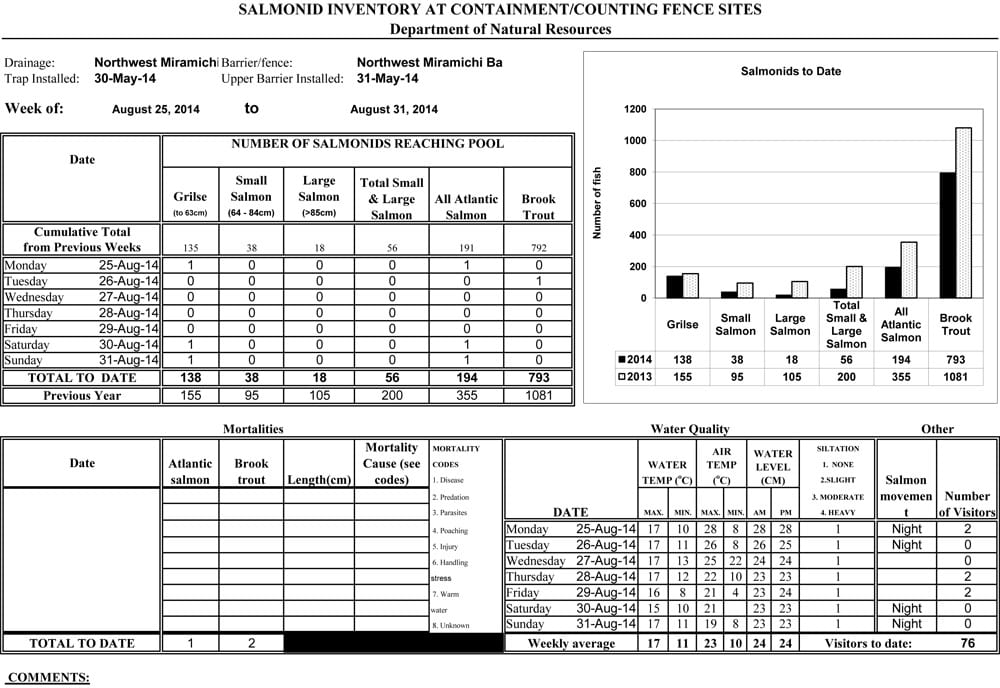