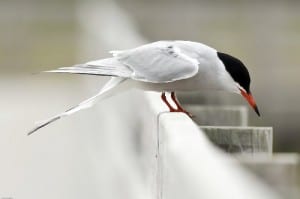 A Common Tern looks for fish from the hand rail of the Kelly’s Beach boardwalk.

If you have visited Kelly’s Beach at Kouchibouguac National Park then there is a good chance you have seen those sleek miniature gull-like birds with black skull caps and bright orange beaks hovering over the quiet lagoon water as you cross the boardwalk. You have perhaps watched as they plunge-dive into the water to catch a small fish. These birds are the Common Tern. Down the coast to the south are two small sandbar islands which are the summer homes and nesting grounds for the members of the largest Common Tern colony in Canada and one of the largest in North America.

These fragile islands rising above the high water mark by only five to six feet are held together by the roots of the grasses that cover them. Here, the terns lay their eggs in sometimes nothing more than a depression in the sand or the matted dead grass left by the tides, usually two or three to a clutch. 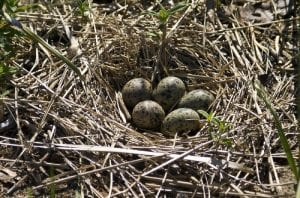 I have had the good fortune twice over the last three summers to be part of a small group of park personnel and volunteers organized to count nests and estimate egg numbers. These surveys monitor the health of the colony annually and have been conducted in late June since 1971. It is systematic and comprehensive. It is also a little noisy, and a little scary! All the terns become very agitated when their occupied nests are approached by what they consider potential predators. A couple of thousand agitated terns can make a lot of noise as they circle above and those bills could give a nasty wound to the head or the back of the neck. We wear hard hats.

In military fashion on a sunny Friday morning this past June, 12 nest-counters lined up in a straight line at the edge of the island holding on to a rope marked off at about seven foot lengths. As the line marched across the island, participants counted the nests by looking between directly ahead and toward the next nest-counter to the left or right depending on the direction the line was moving. This was under the strict direction of Kouchibouguac National Park ecologist, Eric Tremblay. Systematically the line made sweeps across the tiny treeless island then moved down the beach to make a “transect” going back the other way until the entire length of the island had been surveyed. As the line progressed across the island two or three stops were ordered at which time the number of eggs in the nest nearest the observed was recorded as well as the number of nests sighted since the last stop. In this way an accurate tally of the number of nests was made and a random sampling of egg numbers allowed for an estimate of total eggs. Sounds easy enough. 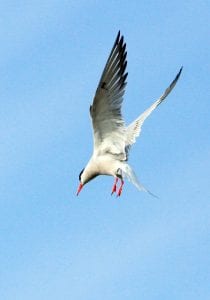 A Common Tern in a dive.

However, during my first involvement with the project in 2012 I had what was to me a small traumatic episode. As the line moved across the island, the pace at one point was picking up and the number of nests was increasing dramatically. Conscientiously I was looking to my right, “seven, eight, nine … oops!” I wasn’t looking ahead carefully enough. The lives of at least two Common Terns to-be, were terminated. I didn’t feel very proud of myself at that point and even a year later I turned down the invitation to count nests feeling that I would again perhaps do more harm than good. I thought I would join in this year in part to help face up to my conscience!

The area surrounding these two fragile islands is very lovely, as is the rest of the park. It is all very natural and when the terns aren’t agitated, peaceful. A distant sandbar was occupied by a herd of perhaps more than a thousand grey seals that did provide a subdued “mooing/barking” kind of background noise, but this added to the feeling of how untouched and seemingly remote the area is. Signs posted on the islands ask boaters to stay away from these tern refuges occupied also by nesting Red Breasted Mergansers, but in far fewer numbers. The exposed nests are very vulnerable as are the helpless hatchlings. Seagulls are perhaps their main predator, the island being out of reach for land mammals. Crows, ravens and owls also present a threat. However, tidal surges resulting from storms inflict serious damage to the low-lying island but the colony has recovered in the past. But with the expectation of rising sea levels, a consequence of global warming, the Kouchibouguac colony could be looking for a new home in the future and such a perfect set of conditions may be difficult to find. 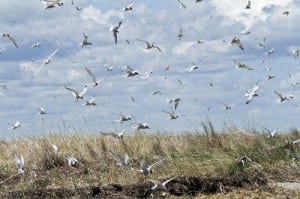 As we marched back and forth across the Islands, each approximately 160 metres long by on average 80 metres wide, the noise at times was surprisingly loud. The agitated birds, circling above, their ominous shadows moving constantly on the ground all around you, calling out their alarm and occasionally an individual swooping down at you with an increasingly louder “chatter chatter” kind of noise. One imagines it diving at your head, but not daring to look up for fear of facial injury or fear of another fatal misstep. Interestingly though, periodically, the entire flock of alarmed birds suddenly become very quiet for perhaps five to 10 seconds and then all at once the noise resumes just as suddenly. It is hard to imagine how the entire circling flock of many hundred individuals can all respond to a mysterious cue so abruptly. Happily it seems that once we moved on the birds quickly resumed their nesting behaviour returning to their own nest, recognized somehow amongst so many so similar. 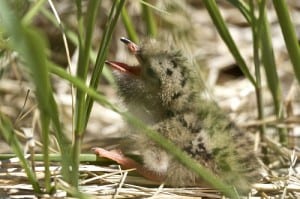 The population size and continued success of the Common Tern colony is taken to be an indication of the ecological integrity and marine productivity of Kouchibouguac National Park. It is considered an important measure. Great care is taken to minimize the impact of the intrusion of the survey with careful preparation and consideration of weather conditions. Being so vulnerable, the islands colonized by the terns change considerably in size and vegetation. Three such islands of the recent past are now reduced to two, however the number of nests and the number of eggs recorded in this year’s count indicate that the colony is stable and healthy. The total number of nests this year was 5396. Considering that there are on average between two and three eggs per nest there are a lot of Common Terns dependent on perhaps three to four hectares of dry fragile land. (A hectare is equal to the area of a baseball field).

As for the number of eggs being affected by my careless stepping as I traipsed back and forth counting carefully, this year I breathed a sigh of relief as I boarded the boat back to the wharf at Cap de Saint Louis, my conscience relieved.