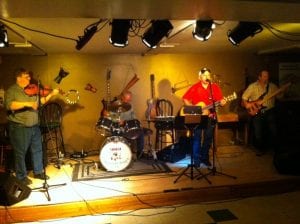 Just Us perform at the Miramichi Folklore Park.

There was lots of music at the latest Friday Night Racket in Renous at the Miramichi Folklore Park with Wil Dedam playing the opening set followed by Just Us with Garfield Newman, Evan Absalom, Royce Aube and Gary Curtis.

This Friday will see the debut at the Park of the band Running Out Of Time, a Fredericton-based group, led by Gary Sturgeon who hails originally from the Barnettville Road. 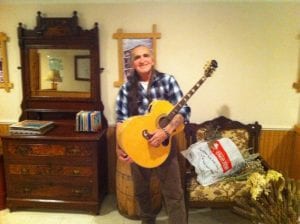 This is a lively band playing a wide assortment of tunes including country, bluegrass, rock’n’roll, blues and more–something for everyone.

On Sunday, Miramichi Folklore Park is pleased to host a benefit from 2 till 6 pm for Joey and Betty Mutch who recently lost their home to fire.

There will be a silent auction, snacks and lots of music. Anyone interested in donating food, prizes or music is asked to contact Bernie at 625-3544.