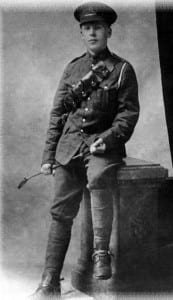 Walter is buried in The Oxford Road Cemetery which is located north east of the Town of Leper in Belgium.

A few years back I had the pleasure of putting together a Veterans’ Book while managing the Tabusintac Community Computer Access Centre.

The Blackville Centre under Mary McCormack had already done this and it gave me the idea to do the same.

Funds from our book helped to purchase equipment for our centre and continues to raise funds for the Tabusintac Legion still. But the most value obtained would undoubtedly be the preservation of our Community History.

In our small village of Tabusintac, family lines run long, thus making it somewhat easier to obtain local history. This though was not the case when it came to a First World War soldier named Percy McFarlane.

On the Tabusintac Cenotaph and also inside the Tabusintac Royal Canadian Legion Branch 47, there is a plaque honouring WW1 soldiers that gave the ultimate sacrifice.

The other names upon these memorials are: Donald McCallum, Hugh Price, Kenneth Price, and Horace Robertson, Sr., family names that are well known and information was abundant about them. But who was this Percy McFarlane? 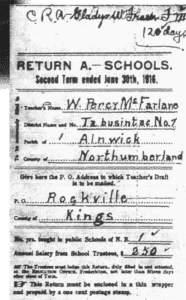 There wasn’t any record of him at the legion. Searching and searching for hours trying different spellings for McFarlane like MacFarlane or McFarlene on the online database for WW1 soldiers for a Percy McFarlane and nothing was coming up. So who was he?

Questioning senior after senior, nobody knew who this soldier was.

“Mc Farlane, not a local name.”

You would think that someone would know something.

It seemed we would never get to the bottom of the mystery of who this soldier was that gave us the ultimate sacrifice and lost his life in WW1 fighting for his country.

Even with the help of Lawrence Kenny, who was key in helping put together the veterans’ book with his access to the Ottawa archives, this Percy MacFarlane still could not be placed. The mystery was building and becoming frustrating. 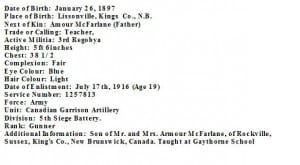 Finally one day, the son-in-law of Bertha Stymiest, Burton Branch, came into the centre and we got talking about Percy and he said he would ask his mother-in-law, Bertha Stymiest.

Burton appeared back a few days later and said, “Bertha remembers a teacher named MacFarlane who taught at the Gaythorne School and stayed at the Buchanan house.”

We had a link! Contacting Lawrence Kenny again who worked his magic and was able to contact a friend in Fredericton, as it turns out who had access to the school archives of NB. There was indeed a W. Percy MacFarlane who taught at Gaythorne School in 1916 in Tabusintac. The Tabusintac connection was finally made!

When returning back to search for attestation papers online for a W. Percy MacFarlane, to my amazement there was an actual photo of him and a written story about his time in WW1. Our unknown soldier was well known. Our mystery was solved and the connection was made. We could put a face to his name and ironically more information was available for him than any other soldier who had lived here in Tabusintac.