Talbot House and the Canadians 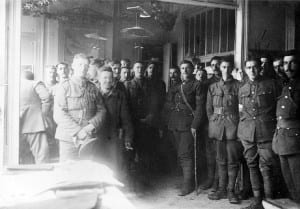 On December 11th, 1915, in the town of Poperinge, Belgium, two chaplains of the British Army—Captain P.C. “Tubby” Clayton and Major Neville Talbot—opened a club where soldiers of all ranks could find both physical and mental rest from the war. “Talbot” House was named in memory of Neville’s brother, Gilbert, who had been killed at Sanctuary Wood the previous July.

The inspired way in which Tubby ran his “home away from home” quickly made Talbot House the best known and most visited soldier’s club in the Ypres Salient. Tubby installed many humorous, but pointed, signs throughout the house that remain to this day.

One sign is a large hand with the index finger pointing towards the door that reads, “Pessimists – way out”. Another reads, “abandon all rank, ye who enter here” and yet another reads, “if you are in the habit of spitting on the carpet at home, then please spit here”. 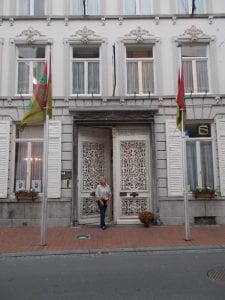 During the Great War the location of Poperinge, in today’s military parlance, would be classed as being in the REBA—the “rear edge of the battle area”. The army used the town as a forward logistics and marshaling area, as well as a training and rest area for troops. It was not a safe place because it was occasionally shelled and bombed, but soldiers could enjoy themselves in “Pop”. The town has often been described as being in the “shadow of hell” with Talbot House being a “haven in the shadow of hell”.

It was estimated that over a half a million soldiers enjoyed the refuge of Talbot House during its three years of operation. The atmosphere and surroundings, enjoyed by soldiers of the United Kingdom, Canada, Newfoundland, Australia, New Zealand, and South Africa, is still tangible today as the house and its grounds are now operated as a museum and a place for travellers to stay.

The tradition, started in 1915, of greeting all visitors with a cup of tea continues. The chapel on the top floor remains as it was in 1918. During WW II the house was commandeered by the German Navy as a local HQ; however, all the furniture, pictures and artifacts disappeared on the night before the German naval officers moved in. They all reappeared after the war and were returned to Talbot House—a testament to the respect the citizens of Poperinge had, and still have, for the soldiers of the Great War.

A visitor to Talbot House will quickly become aware of the Canadian connection to the house, and with a little more research, will discover even more about the Canucks and the Newfoundlanders who found refuge there. On the main floor there are three large charcoal sketches by Eric Kennington of Canadian soldiers. The sketches are very personable impressions that capture the essence of the hard work of war endured by so many. There are only two known photographs taken inside Talbot House during the war, both of which are now located in the dining room. One of the pictures is of a group of Canadian soldiers relaxing in the “Canadian Lounge”. 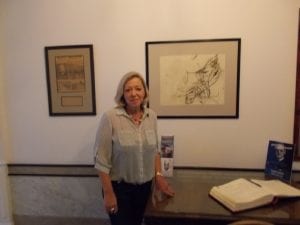 On the second floor, beside one of the large windows overlooking the back garden, one will find a framed note written by Tubby Clayton. The note reads: “The Canadian Lounge, built outside on the lead roof by a Newfoundland draft in 1917. It was the oddest makeshift, supported mainly by a telegraph pole rammed through the lead and footed very roughly in the tiled room below. Wire walls covered in cardboard inside and felt outside with linen windows here and there made up the rest of it. But here chess, drafts, ping-pong and conversation flourished from 8 AM to 8 PM at least. It held some 70 men, inured to spatial propinquity.”

The Canadian Lounge has long disappeared, but the roof over the communal kitchen and dining room, that was its floor, does remain.

Soldiers were encouraged to leave notes to aid in locating friends or relatives who might be in the area. These notes were duly typed and posted on the foyer “friendship board”. Amongst the eight pages now on display is one where a lonely sapper of the Canadian Railway Troops has written in pencil, “Spr R Jarman, No 1 Co, 6th Bn, CRT, from Hamilton Canada — Friends please write.” 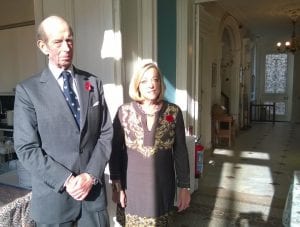 Corinne had the opportunity to meet and cook for Edward Windsor, the Duke of Kent.

On May 28th, 1916 Sgt Gilbert Pegg, of the Canadian Army Service Corps, was sitting in the back garden with his brother, writing letters to their parents back in Winnipeg, when a German artillery struck. Sgt Pegg was killed by the shrapnel. Gilbert Pegg was the only soldier killed at Talbot House and is buried in the Poperinge New Military Cemetery.

The cemetery has an infamous record in that it contains the largest number of men to be executed by the British Army and buried in one place. Two of the executed soldiers and one officer buried there are Canadians. Today one can visit the shooting post and the convicted man’s holding cell preserved in the town hall courtyard where at least eight of the executions were carried out.

The house was built in the late 1780s and was the property of a wealthy hops merchant. Today visitors to Talbot House can enjoy the museum and video concert show found in the former hops warehouse, the grounds and bathhouse and the “old house”. 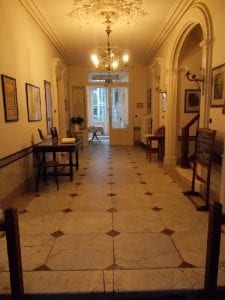 The hall at Talbot House.

Visitors can also opt to stay in Talbot House which includes full use of a communal kitchen. The old piano in the parlour still plays well and many singsongs still break out as visitors become friends and the old songs are played. The house is operated by a not-for-profit foundation and usually has someone on staff, from Britain, designated as the British Warden. The warden, who is a volunteer, lives at the house for 2-4 weeks and welcomes all guests in the wartime tradition. The British aspect of the wardship was altered somewhat in March-April 2007 when Corinne and Gary Silliker, of Mahone Bay Nova Scotia, became the first Canadian Wardens of Talbot House. They have returned to act as wardens in the summer of 2008, again during the 90th anniversary of the Armistice in November 2008, again in August 2011, and this year for the first three weeks of November.

Talbot House still remains a haven for travellers. It has become place of living remembrance that allows visitors to experience what it was like to find refuge and peace during a time of constant death and tragedy. 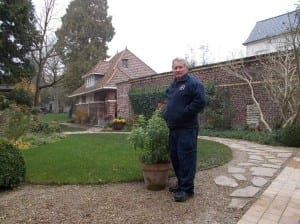 Gary Silliker in the garden at Talbot House, Belgium while staying there to perform Warden duties.

Author’s note: I discovered Talbot House in late November 2005 when I was on R&R from my job in Kabul (UN Mine Action Centre for Afghanistan). I was so moved by the place that I decided to apply for a chance to do the warden duties. Being a warden was an honour and a personal act of remembrance for me and my wife.

Gary Silliker is proud of his Miramichi roots. He has always had a keen interest in the men and women who were swept up into the events of the world’s first global conflict – The Great War for Civilization. He had a lengthy military career, proudly serving with the Canadian Military Engineers. In 2005 he took leave from his position with UN Mine Action Centre in Afghanistan to tour the battlefields of France and Belgium and seek out the graves of the Miramichi war dead, that journey prompted him to research and write A Deadly Drive: The Miramichi Experience during the Great War published by FriesenPress Editions. Gary and his wife, the former Corinne Dalton of Newcastle, currently reside at “Sappers Rest” in Mahone Bay, NS, and have two children and four grandchildren.