May 19, 2015/Giv'er Miramichi/Be the first to comment/Arts & Entertainment, Community & Fundraising 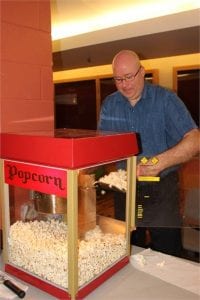 The first Annual Miramichi International Film Festival was held on Saturday, May 16th at NBCC-Miramichi.

The event was sponsored by Wellness/Healthy Communities in partnership with NBCC and the Miramichi Multicultural Association.

Following the event, Judy Bowman shared the following observations on the Words on Water Facebook Page:

Short animation films for middle and high school students started the day, followed by four documentaries from Miramichi’s own Selim Ozcan, illustrating the difficulties of life in Ethiopia, educational initiatives, cultural rituals, and a trek through the Simian Mountains.

“By living with people you start to see the problem. We, coming from the west, are able to empower those less fortunate and find a solution,” Ozcan says.

The festival ended with eight short, powerful films by Steve Woods from Ireland. Woods is a founding member of the Galway Film Fleadh and the Screen Directors Guild of Ireland and teaches Experimental Animation at the National Film School in IADT,Ireland.