Miramichi Fishing Report for Thursday, May 21, 2015

The river is shifting gears this week.  By and large, the spring salmon season is over, although there are still some stragglers to be caught.  The striped bass catching has picked up this week as the water warms, and there are decent reports of bright sea-trout on the Main Southwest Miramichi.  The gaspereaux fishermen have set their nets, and fiddleheads are hitting stride.

This week, the striped bass have really started to pick up.  Catching 20 was almost average on the weekend.  I heard one report of an angler catching 72  although I cannot confirm it. 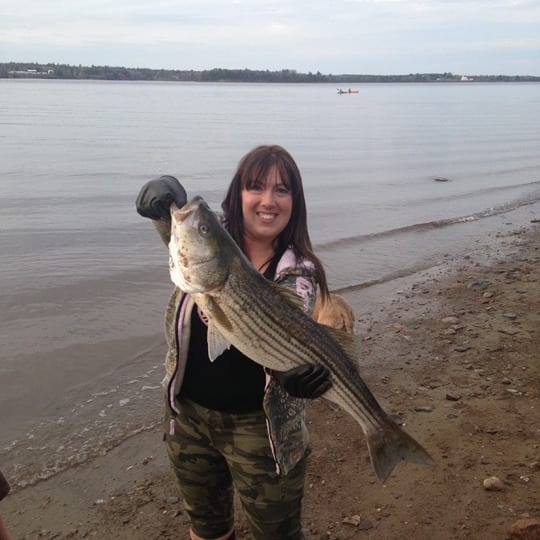 Ashleigh Reynolds with a 22 pound catch-and-release in the Loggieville area.

W. W. Doak and Sons in Doaktown said we are now officially “between seasons” as the spring salmon season is basically finished, as anglers are awaiting the bright runs of sea-trout and salmon.  There were some black trout reported, and they felt it would not be long before fresh sea-trout arrive.  Water conditions were good

Flies of choice were Bugs, Muddlers, and in wets streamers such as Mickey Finns, along with Butterflies and White-tailed Green Machines.

Derek Munn of Ledges Inn in Doaktown and Mountain Channel in the Rapids area said spring salmon season was over for all purposes, although there were a few stragglers around.  They were putting their spring equipment away and getting ready for hopefully a good summer and fall.  He and friends went bass fishing on the weekend and had great success.

Flies of choice were Bass Streamers which are a little bigger than normal streamers with lots of Krystal Flask along with lures and rubber fish.

Herb Barry Sr. of Herb’s Fly Shop on the Station Road in Blackville said spring salmon fishing was basically over with only an odd one still around.  Anglers were beginning to pick up some fresh sea-trout.  He had seen pictures of a couple in the 4 to 5 pound range, and had heard of decent numbers of three pounders being hooked.  Water conditions were good, and recent rains might put it slightly high.  He’d heard anglers were picking up good numbers of striped bass in the City of Miramichi area.

Flies of choice were Blue Smelt, Blue Elvers, Muddlers, but no Humpies for trout yet.

Curtis Miramichi River Outfitting in Blackville said spring salmon were basically finished, but anglers were picking up some nice sea-trout.  One lady caught a 4-pounder.  The water was clean and at stable levels.  A few canoers were starting to hit some of the tributaries.

George Routledge of George’s Fly Shop at the Mouth of Renous in Quarryville said anglers were catching good numbers of bright sea-trout.  One angler lucked into a six-pounder Tuesday near the Quarryville Bridge.  Some were picking up some trout trolling in the Doyle’s Brook area.  The second run of smelts was in, but there were a lot reporting they were quite small.  Spring salmon season was basically finished.

Jim Laws of Miramichi Hunting and Fishing in Newcastle, Miramichi reported spring salmon fishing was petering out, and there were no reports of brights yet, they are expected soon. There were decent reports of trout, some sea-tout.  He had heard the trout derby in Red Bank was reasonably successful in trout numbers.  But the big story was striped bass, lots of them.

Flies of choice were lures and rubber fish for bass.  There were not many flies being picked up this past week.

Syd Matchett of Trout Brook Fly Shop on the Northwest Miramichi said angling there was quiet as most anglers were fishing striped bass further down river.  There was the odd spring salmon still around, but basically the season was finished.  There were some black trout caught on the weekend, and he expected the bright trout very soon.  The smelts were still in around the Fourmen Lodge.

Flies of choice were Black Ghosts and Golden Eagles.  For bass there were using anything shiny and flashy along with rubber fish.

Debbie Norton of Upper Oxbow Outdoor Adventures on the Little Southwest Miramichi said they were still catching a few spring salmon last week, and on the weekend Kim Burkholder nabbed two salmon Saturday and her husband Joe one.  Another couple caught three. There were a few black trout also caught on the weekend. Norton said she’d heard the Red Bank Trout Derby was good, but no t quite as many fish as in some years.  The smolt wheels and recapture net near the Centennial Bridge in Miramichi were swinging into action, but the smolt out-migration was just starting, and should pick up in the next few weeks.  Unlike reports of small smelt in the Quarryville area, the smelts there were good sized.

Flies of choice were Golden Eagles and Winnipesauke Smelts.

So with river seasons changing, fresh sea-trout and lots of striped bass around, it is time to get out and “on the water”.

Check out Deals 4 U in Miramichi for your grocery needs, and good Cuban cigars to celebrate getting back to the rivers. Drop by Miramichi Marine, where they have a 2015 Princecraft Yukon 15 on special for $6,565. Click here to see more of their inventory.

Thought for the Week: “Three-fourths of the Earth’s surface is water, and one-fourth is land.  It is quite clear that the good Lord intended us to spend triple the amount of time fishing as taking care of the lawn.”  ~Chuck Clark

E-MAIL:
This post is about a fly collection I just completed for a friend’s book project, with a quick little video showing the carnage tying that many different flies in a relatively short period of time and photos of the flies.

Hope you enjoy it!
http://theriverscourse.blogspot.com/2015/05/the-cave-declared-disaster-area.html

A great recipe for home or camp, and fun to cook up:
http://theriverscourse.blogspot.com/2015/05/richs-jerked-chicken.html
Hope you all have a great summer!
Gary Tanner

ASF Research Blog – Updates on the scope of the research program now being carried out in our salmon rivers.
http://asf.ca/research-in-the-field.html

Saving Our Salmon
~~~~~~~~~~~~~~~~~~~~~~~
Paul Smith provides perspective on salmon conservation after having listened in on the St. John’s hearing of the Ministerial Advisory Committee on Atlantic Salmon
http://asf.ca/saving-our-salmon.html