Angling showed an improvement this week.  As Syd Matchett says, “When the Yellow-Butterflies are back, so are the Salmon”, and I did see a couple of Yellow Butterflies myself this past week.  There were more reports of salmon and even a few grilse being caught, seen or rolled. Let’s hope it is a sign of better things to come. 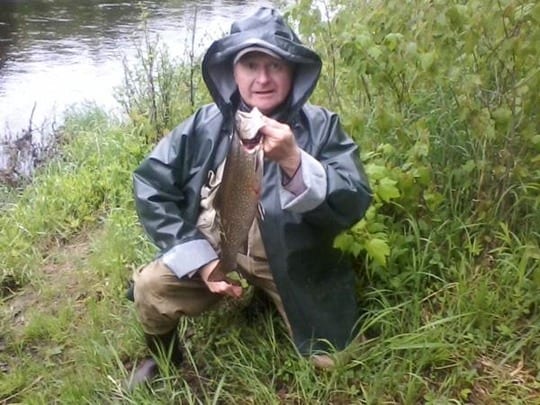 Doug White’s Tammerack Sports Fly Shop in Juniper said there were still a few sea trout around and there have been several salmon sightings but very few fishing.

W. W. Doak and Sons in Doaktown said reports were improving this week over last, as more anglers were getting on the river.  However, there were not a lot of local anglers out yet.  Some anglers were catching.  There were more salmon (one here, one there) than sea-trout being hooked.  Over all, they felt it was moderately encouraging, particularly for the low number of local anglers actually out.  Water conditions were very good.

Derek Munn of Ledges Inn in Doaktown and Mountain Channel in the Rapids area said they were seeing and hooking  the odd salmon, as well as rolling a few.  Mountain Channel was seeing fish moving through.  Water conditions were close to perfect.  Over all, Munn said it was an encouraging start to the season compared to last year.

Herb Barry Sr. of Herb’s Fly Shop on the Station Road in Blackville said he’d heard of a few fish being seen, but no catches yet.  Anglers were getting some small trout in the Bartholomew River.  Water conditions were very good and there should be fish moving through.  There were still not a lot of local anglers out.

Flies of choice were Preachers, Undertakers, and a few Bombers.

Curtis Miramichi River Outfitting in Blackville said a few anglers were successful in catching, with more salmon than grilse being reported (which is normal for the time of year).  There were no trout reports to speak of.  Canoeing was good and water conditions close to perfect.

George Routledge of George’s Fly Shop at the Mouth of Renous in Quarryville said there were no salmon or grilse caught there yet, although a couple had been seen.   He had heard of one caught in the Upper Blackville area.  There was only the odd small trout being hooked.  The water height and temperature were perfect.

Flies of choice were Green Machines, Shady Ladies, Black Ghosts and Butterflies on no. 6 & a few no. 8 hooks.

Jim Laws of Miramichi Hunting and Fishing in Newcastle, Miramichi reported quiet angling with the odd salmon being caught, but in no great numbers yet.  There were no trout reports.  There were still some Striped Bass around, particularly in the evening, and the later it was the bigger the bass.  Water conditions were good.

He heard one disturbing story.  He was told that a Gaspereaux fisherman pulled his nets to find about 1200 bass, a half-barrel of Gaspereaux, a few Shad and four dead salmon, apparently killed by the bass.

Flies of choice were Black Ghosts, Green Machines and Butterflies.

Syd Matchett of Trout Brook Fly Shop on the Northwest Miramichi said angling had improved since last week, and was what he would call “decent”.  Over the week, every pool between his shop and the Mouth of Little River had produced at least a fish.  One of the clubs further up had recorded five salmon and two grilse this past week.  Will Doyle had hooked two grilse and Scott Cormier a salmon.  The wardens saw two salmon hooked at another pool.  The number of anglers out was increasing.

Billy Sargent (now DR. Sargent) had to perform emergency river-side surgery this past week on his friend Danny Sellars who had managed to hook his thumb quite nicely. Sellars accomplished this feat while trying to put his fishing rod into its case.  (Maybe he just wanted to become a “Thumbody”).  Sargent reported that strangely there was no anesthetic or alcohol to lessen the pain or purify his instrument, but he managed to successfully remove the hook.  When I saw the patient on Wednesday his thumb looked pretty good.  Bravo Billy!

Flies of choice were Yellow Butterflies, White-tailed Green Machines, Bear Hairs, Undertakers, and Black Ghosts.  (Not sure what the Thumbs were taking!)

Debbie Norton of Upper Oxbow Outdoor Adventures on the Little Southwest Miramichi said she had been away, but had not heard of any salmon caught since last week.  There were still decent numbers of Stripers around the Red Bank Bridge area.  The water was up nicely after last week’s and Tuesday’s rains.

So as we officially move into summer this weekend, it is time to get out and “on the water”.

Check out Deals 4 U in Miramichi for your grocery needs, and good Cuban cigars to celebrate getting back to the rivers. Drop by Mac’s Seafood Market to get fresh-cooked local lobster for Father’s Day. Market and canner sizes available while quantities last.

Thought for the Week: “I like to fish. Fishing is always a way of relaxing.” Tom Felton

Courtesy of CBC Radio, Fredericton is an interview by Terry Seguin with former Minister of Finance of NB Norm Betts who now operates a smoked salmon and canoe business in the Doaktown area.   Norm is refurbishing a Chestnut Canoe owned by baseball legend and Atlantic Salmon Hall of Fame member Ted Williams.

In addition, on Fri., June 12, 2015 an announcement was made that ALL large salmon must be released on the Matane, the Ouelle and the Grande Rivière from the June 15th opening day until July 31.

Hi All
I hear there are salmon being put through both the Millerton and Cassilis trap nets – one or so a day at each location. There were 4 salmon and 1 grilse that went through Millerton today though so maybe numbers will continue to pick up. I believe this is the first grilse they have seen.

Field Report
The smolt wheels and net have been removed and cleaned / repaired in preparation for next year. We were fortunate this year to not have had any bad weather affecting the operation of the wheels, allowing them to be fished every day, though high winds did stop us from fishing the trap a few days. Fortunately when we did get back to the trap after a two day fish we did not find high mortalities or too many fish to count. Holly has not had a chance to analyze the data as of yet but the results are forthcoming. You are probably also wondering how the 160 acoustically tagged smolts made it through the system. Preliminary results show about 90% of the tagged smolts made it to the head of tide – the Red Bank Bridge on the Northwest and the Quarryville Bridge on the Southwest. This was typical and expected – the interesting part will be how many made it through the estuary to the bay.

Stocking of salmon fry should begin next week with over 500,000 fry to be stocked in the Northwest, Little Southwest, Sevogle and Cains Rivers and in the Southwest at Rocky Brook, Clearwater and Juniper.

Further regulations contained in the Press Release (Fr) include the need to use single, barbless hooks. The barbs may be fully pinched down on existing flies – See more at: http://atlanticsalmonfederation.org/rivernotes/#sthash.d69Bmb9B.dpuf

Upcoming Events
If you and/or a family member or friend would like to try salmon angling this is your opportunity! The MSA will host its 6th annual First Cast Event on June 27th and 28th, 2015.  This two-day event matches newcomers with mentors to experience the sport of fly fishing.  Saturday’s classroom session and casting practice will be held at the Atlantic Salmon Museum in Doaktown;  a full day of supervised fishing on a private pool on the Miramichi River will follow on Sunday. There is no fee to participate and we supply the fly rods – just bring your lunch.  For more information visit First Cast 2015 or call Jo-Anne at 506-457-2220.

Three weeks away! The MSA’s 10th Annual Miramichi Salmon Classic, encompassing 3 days of salmon fishing on 5 different stretches of the Miramichi River, will be held from July 5-8, 2015. This year’s fee is $350 CND for first time participants and $450 CND for returnees and includes your 5 fishing sessions, fishing license, volunteer guide service, ticket for Opening Night banquet and your lunch each day. Tickets are also available for the Sunday evening banquet at $50 each and we invite everyone to join us to welcome new anglers to the river. For more information, visit MSA Salmon Classic or call Jo-Anne at 506-457-2220.

Finally, it is with great sadness that I must tell you of the passing of long time MSA Director and great supporter, Bob Kenny of Fredericton.
“Among Bob’s numerous passions, fly-fishing and the Boston Red Sox were two interests that particularly nourished his soul and even occasionally repaid the emotion and energy he invested in them. Bob was ultimately rewarded with three World Series championships, and, allegedly, a salmon or two.” http://www.inmemoriam.ca/view-announcement-498022-robert-bob-kenny.html
Bob did invest a lot of energy into the MSA and many other organizations. He touched many and will be greatly missed.
Yours in conservation;
Nola
——————————————–
Until next week
TIGHT LINES
DOUG