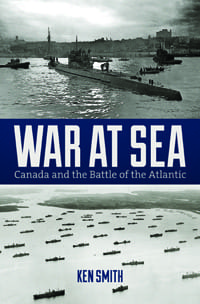 Seventy years. Yes, it has been 70 years – practically an entire generation – since the end of WWII and, as well, the end of the Battle of the Atlantic. A battle that started just a few hours after the declaration of war in 1939 and ran until the cessation of hostilities in 1945, thus making it the longest-running battle of WWII. At the end of it all, Canada’s Navy which started with just a few small, aging ships, was the third largest navy in the world, surpassed only by Britain and the US.

Many books (fiction and non-fiction) have been published on the subject, movies have been made (“The Cruel Sea” comes to mind) and now Nimbus Publishing has just released War at Sea: Canada and the Battle of the Atlantic by New Brunswick author Ken Smith. In the author’s own words:

“War at Sea, at a personal level, is my way of honouring those who took part in the Battle of the Atlantic. Although there are, of course, other books out on this topic, there is room for more, much more.  D-Day, Juno Beach, The Battle of Britain, and the heroic antics of our Spitfire fighter planes will continue to fill bookshelves while the story of our tremendous struggle for control of our vital sea lanes remains a distant second.. Hopefully, War at Sea will generate new interest, especially among our younger readers. We it owe it to our veterans.”

War at Sea is Ken Smith’s eighth book. Some of his other books include such titles as: Miramichi Facts and Folklore,  A History of Disaster, Homegrown Heroes: The Bathurst Sports Hall of Fame and Mainstreet Memories: Life in Bathurst in The Fifties.

The Nimbus release notes regarding War at Sea state:

“War at Sea describes the history of the engagement through a detailed catalogue of the technology, weapons, and ships, including frigates, corvettes, and fairmiles that the Canadian Navy depended on.”

That is certainly true. Mr. Smith has done his research (as the bibliography lists many vital references) and this book, if nothing else, is an excellent introduction for those unfamiliar with this aspect of the Canadian Navy’s involvement in WWII. As well, the book is generously peppered with personal experiences from Historica Canada’s Memory Project which adds a certain value to this book. My only quibble was that sometimes the ship of the sailor being quoted was not always stated which would have been helpful to know.

Whilst on the subject of quibbles, it would have been nice to have some more photographs of the ships described as well as footnotes, which are totally absent in this book (apparently, the author was limited to page counts). Also conspicuous by its absence are any mention of the existence of the HMCS Haida and the HMCS Sackville, both beautifully restored veterans of the Battle of the Atlantic located in Hamilton, Ontario and Halifax, Nova Scotia respectively.

As mentioned previously, the quoted personal experiences of the sailors involved adds exceptional value to the book. Another valued aspect of the book is the list of those ships lost in the Battle of the Atlantic, which at almost 90 pages make up the bulk of this book’s 175+ pages. Also mentioned are the ships of the underrated Canadian Merchant Navy lost in the Gulf of the St. Lawrence, bringing the war very close to Canadian waters. Giving the book a lighter, enjoyable feel (if one can use those terms in a book about war) is chapter four: Civilian Encounters with U-Boats which highlights just how close the war came to Canadian waters and our soil and the farcical exploits of two landed German spies here in Canada. This chapter alone is worth the price of the book and makes it a worthy addition to the Canadian Naval historian enthusiast’s bookshelf.

War at Sea will certainly appeal to two groups of people: armchair enthusiasts of the Canadian Navy and younger ones who would like an overall view of the Battle of the Atlantic and just how close it came to Canadian shores. My only wish is that it could have been longer and included more details, but that is no fault of the author, who apparently wanted to pack as much information as he could in the space allowed. Don’t pass by the opportunity to read this book for I feel it deserves a place in your naval library. Ken Smith can usually be found at the Newcastle Farmer’s Market every Friday selling his books.

While not a New Brunswicker by birth, James M. Fisher has lived in Miramichi, NB for over seven years and feels quite at home there. James is an ardent reader whose aim is to highlight New Brunswick authors and publishers, as well as cover subjects of interest to New Brunswickers in particular and Maritimers in general.