It has been said that “slow and steady wins the race”.  Let us hope so as our salmon and grilse numbers continue to improve with each passing week.  There are fresh fish coming into the system each day, and in numbers that are an improvement over last year.  Generally anglers are seeing fish and catching some.  This week’s heat wave put the brakes on a lot of catching, and almost had the cold water pools format implemented.  Only cooler night temperatures such as we had Wednesday prevented this from happening.

Doug White’s Tammerack Sports Fly Shop in Juniper said I hate to be the only one with the doom and gloom but here on the headwaters the river is down to August levels and there are VERY Few  salmon sighted and only two even hooked. The reports down river are saying record catches but a dozen or two salmon on the whole main river isn’t what I would call abundant. More outfitters reporting down there perhaps? Unless we get a couple feet of  water, the fishing is done…we’ll see.

W. W. Doak and Sons in Doaktown said angling was moderate as the water was warm and down a bit, but not in extremes.  There were a lot of sports fishing, but not many locals.  There were good numbers of fish around and being seen, but not taking well.  Generally, it was not gang-busters, but good compared to last year.  One could comfortably go to the river expecting to see and possibly catch fish. 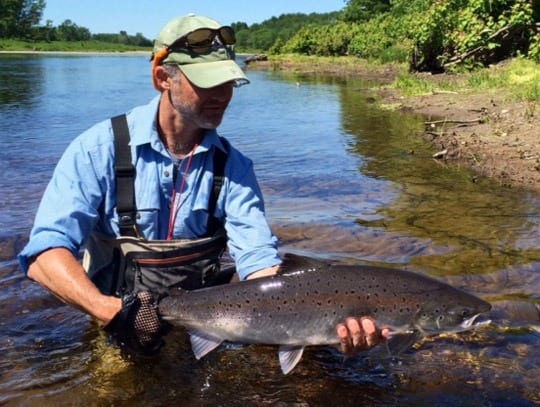 Gavin Higgs with a beautiful salmon taken on a stone ghost.

Derek Munn of Ledges Inn in Doaktown and Mountain Channel in the Rapids area said there were fish around and being seen, but they were cruising right through and not taking well with the warm temperatures (high 70s Fahrenheit later Tuesday evening).  It had been good prior to the heat wave with grilse and some big salmon being hooked.  A guide at Mountain Channel said on Saturday he had never seen as many fish moving through in one day.

Flies of choice were Bonnie Bells, Blue Smurfs (one anglers hooked three on this fly), Undertakers, and Blue & white Bombers.

Herb Barry Sr. of Herb’s Fly Shop on the Station Road in Blackville said angling was not too bad.  People were catching grilse and the odd salmon, and seeing decent numbers, although there is no big run on.  However, it is certainly an improvement over this time last year.  The water was beginning to get warm and low.

Curtis Miramichi River Outfitting in Blackville said there were lots of fish around and being seen, but with the warm conditions they were not taking well.  But they were catching some.  One angler hooked three grilse and two salmon in two days.  Water conditions were warm and getting low.  Canoeing was good.

Flies of choice were White-tailed Green Machines, Undertakers, Shady Ladies, Same-Thing-Murrays and Bomber that were brown & orange as well as those that were Blue.  Some were buying Green Highlanders, but there were no reports back yet.

George Routledge of George’s Fly Shop at the Mouth of Renous in Quarryville said that fishing was pretty good with a mix of salmon and grilse being hooked.  There were good numbers of fish around, but with warm (75 Fahrenheit) and low water, they were not taking well.

Flies of choice were White-tailed Green Machines, Shady Ladies, Bear Hairs, and Black Ghosts on no. & hooks with some 10s.  A few were using Bombers where the water was deeper and slower. 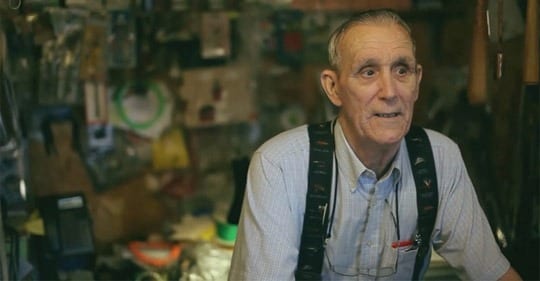 George Routledge Citizen Appreciation Night
A Citizen Appreciation Night for George Routledge will be held on Saturday, July 18 at 6:00pm at Saint Andrews United Church Center in Blackville. A cold buffet will be served. The Sutton Brook Singers will provide entertainment for the evening.  Tickets are $20 and are available at Circle K Irving in Blackville, Route 118 Convenience in Renous, Renous Convenience or by calling Marsha at 843-2525 or Joy at 622-6704. Click here for more details and to watch a video of George from 2014.

Jim Laws of Miramichi Hunting and Fishing in Newcastle, Miramichi reported some fish going, good numbers around, with some being caught.  But the water was getting low and warm, making the fish not interested in taking much.  There seemed to be more local anglers fishing for trout than salmon

Flies of choice were Royal Coachmen, Rat-Faced McDougalls, and anything white, along with Black Ghosts, and White-tailed Green Machines.

Syd Matchett of Trout Brook Fly Shop on the Northwest Miramichi said angling was quiet, especially since the warm weather had arrived.  There were fish around and being seen, but they were not taking well.  It had been good fishing before the heat.  Last Thursday, Bonnie Wright had hooked seven over two days, while her husband Wilbur had also hooked several.  Crown Reserve stretches also had decent fishing.  One crew from the Crawford had landed 10 fish and another crew at Stoney Brook had hooked several.  The water was low and warm, with a good rain needed.

Debbie Norton of Upper Oxbow Outdoor Adventures on the Little Southwest Miramichi said they have been doing some catching.  Dick Huggard of Truro, NS and his buddy Wayne both caught nice grilse, as did Stephanie and Paul Elson.  The Annual Miramichi Salmon Classic concluded yesterday with 21 anglers having pretty good success with at least 15 fish hooked.  There would probably have been more if the weather had been cooler.  Generally, there are fish around, but not taking well with warm and low water conditions.

Flies of choice were White-tailed Green Machines with Angel Hair.

So, with a few cooler nights ahead, conditions may improve to make it worthwhile getting out and “on the water”. 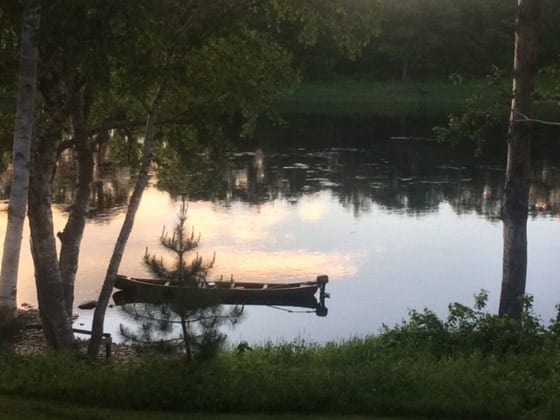 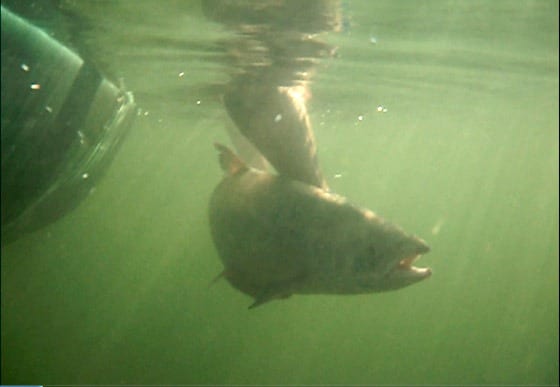 (Now here’s a story one could not make up!)
Hey Doug:
I had an alright Crown Reserve fishing trip until the end.  I hooked a nice 16 -inch trout and hooked a salmon and a grilse but lost them.  Everything was awesome until half way out to the Fraser Burchill Road when my wheel bearing went in my truck  We stayed there on side of road all day waiting for another truck with a float to come for us, but they too blew a tire on the Fraser Burchill on the way in.  A warden picked them up and drove them to us.  Then the warden’s truck wouldn’t start as his alternator went.  So there we were: three trucks down.  Needless to say, it was a long trip, but we finally got out and home.  Just wanted to tell you our luck… lol.   Keep up the great work!
Tight Lines & Cheers,
Brandon Scott
————————————

This past Saturday evening, I was fishing Greasy Island Pool on the Renous. We had parked the truck down in the ditch just past the 150 mile marker and walked through the bog down to the pool. Monday I was sorting through my gear, and washing my waders, when I realized I didn’t have my Sling pack with some gear in it! I’ve looked everywhere and the best I can figure is I set it on the back of the truck while taking my waders off, and left it there.

Other then a few small gadgets and my license, here is what is in it:

I am offering $100 reward for its safe return!

From Miramichi Salmon Association
Hi All

The weatherman is forecasting hot and sunny for the next four or five days with feel like temperatures in the 30’s (86+ degrees Fahrenheit). The lows will be around 15C (59F) so although the rivers are heating up they should recover somewhat overnight. River temperatures did reach the low to mid 20s (68+F) the last few days at all three monitoring stations (Northwest at Wayerton; Southwest at Doaktown and Little Southwest at Upper Oxbow). A link to the information from these stations can be found on our website (www.miramichisalmon.ca) under Quick Links – Water Levels and Temperatures.

DFO has issued a variation order closing the following pools to all angling methods from July 1st until December 31st. This is a regular closure which happens every year to protect these holding pools.

Barrier Reports
Both the Northwest and Dungarvon Barriers continue to show improvement over the same week last year. 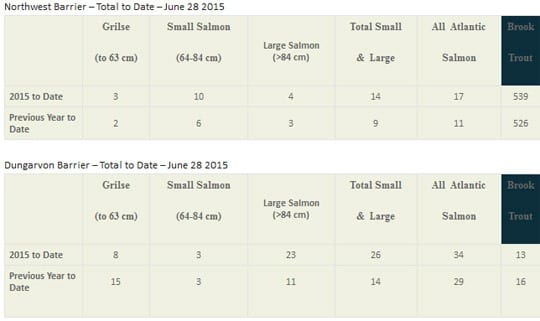 MSA Trap Net
As mentioned earlier we are now fishing our trap net located just above the Centennial Bridge in Chatham. We do not know what percentage of the total run is being caught in this trap but it would be reasonable to estimate we are catching 1-4% of the total number of fish going up the river.

We began fishing on Monday and saw what we felt were great numbers. The Thursday catch was low but it was felt the net had not been fishing properly. The fish we catch are being tagged and returned to the river as part of the Mark-Recapture stock assessment carried out by DFO. 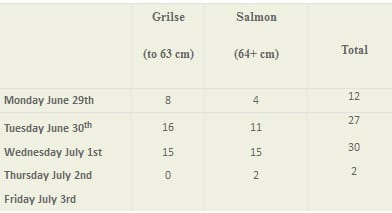 If we are correct in our conservative estimate of catching 4% of the run, approximately 750 fish went up the river on Wednesday. Unfortunately we do not know which tributary the fish will enter but the more fish we can tag the better the DFO estimate will be.

Millerton and Cassilis Traps
I do not have daily numbers from the Millerton and Cassilis trap nets fished by DFO but they do post trap and barrier numbers the middle and end of each month – these can be found at http://www.inter.dfo-mpo.gc.ca/Gulf/asir/count?period=0615&group=1 or click the DFO Salmon Counts Quick Link on our home page.

These traps catch approximately 7-10% of the run going up the river so 78 salmon in the trap could represent 800-1100 fish in total.

With these early results and numerous reports of anglers catching fish on all river systems we are cautiously optimistic about the run this season.

Unfortunately Eel Ground has put their gill nets in this week. In correspondence this was the explanation provided – We are providing the fishers a small window of opportunity to provide for their families as the lateness of agreement hampered our ability to strike a deal to have any amount of bass processed for food.
Hopefully the small window will be just that.

Enjoy the nice weather and good luck to everyone participating in the upcoming Salmon Classic!