This week proved to be a slow one as the heat moved in again, stifling virtually any salmon movement.  There were very few fresh fish at the counting fences each day and those already in the system were holed up in pools with little inclination to take.

In addition the water is extremely low and temperatures were high, getting a slight break on Tuesday. The bottom line is we desperately need a good, or even a few days   of, steady rain to freshen the system, add oxygen to the water and to bring in fresh fish.

If the weather forecast holds true, we will get at least some relief today and tomorrow with amounts of 25-35 ml expected.  Fingers are crossed.

W. Doak and Sons in Doaktown said angling was pretty quiet.  There were fish around, but nothing fresh and very few were taking.  The water was low, but the temperature had improved on TuesdayA good rain is needed to freshen the river, get the fish moving and hopefully bring in fresh fish.

Flies of choice were Same-Thing-Murrays, Undertakers and White-tailed Green Machines.  They said if we get a good rain anglers will likely move to the Fall patterns.

Derek Munn of Ledges Inn in Doaktown and Mountain Channel in the Rapids area said angling was very poor and there were few anglers out.  There were old fish around, but they were not taking.  The water was low and warm, but cooler nights were helping the temperature.  He was hoping for a good rain Thursday-Friday to improve conditions and perhaps bring in some new fish.

Flies of choice were mostly Dry Flies and Bombers along with a few no. 8s in wets.

Herb Barry Sr. of Herb’s Fly Shop on the Station Road in Blackville said anglers were seeing fish, but certainly not many fresh fish, and those in the system were not in a taking mood.  There were very few anglers out.  He said some kids actually walked across the river in the Rapids area on the weekend in places where the water was not even up to their knees.  The water was obviously warm and low, but cooler nights and the forecast rain should improve conditions and help the angling.

Curtis Miramichi River Outfitting in Blackville said angling was quiet with only an odd fish being hooked.  There were very few anglers actually out.  There were good numbers of old fish around, but they were not taking in the low and warm water.  The temperature of the water improved Tuesday and should stay at a good level for the next few days at least.

George Routledge of George’s Fly Shop at the Mouth of Renous in Quarryville said angling was very slow with not even an angler out over the long weekend.  The water was very low and warm, although the temperature did improve on Tuesday.  He was hoping rain this week’s end would improve the water and bring in some fresh fish.

Flies of choice were Black Ghosts, Shady Ladies, White-tailed Green Machines and Bear Hairs.  A few Bombers were being used in some pools.

Jim Laws of Miramichi Hunting and Fishing in Newcastle, Miramichi reported only a very odd fish being hooked, and very few anglers actually out.  He felt that if we get the rain that is forecast, conditions should improve, and probably bring in some fresh fish.  Cooler nights would also help.

There were no reports of Striped Bass being caught in the Miramichi area during the long-weekend retention period.

Flies of choice were White-tailed Green Machines, Shady Ladies. Bear Hairs, but few of the traditional Fall patterns yet.

Syd Matchett of Trout Brook Fly Shop on the Northwest Miramichi said the water was so low that the poor fish were swimming in circles and didn’t know which way was up or down river.  Water temperature was decent.  The only fish around were old fish, and there were very few anglers out.  Rain is needed badly to bring in fresh fish.

Debbie Norton of Upper Oxbow Outdoor Adventures on the Little Southwest Miramichi said they picked up a few fish last week.  Steve Gillis of Saint John hooked a salmon and a grilse. Jody Middleton had brought a group of students from the Saint John area, and one young female angler caught her first ever grilse, and then added a second.  Generally, the water is very low, although, the temperature improved Tuesday  She was waiting for rain and counting the days until September 20th when she predicted the Fall run would arrive.

Flies of choice were Ally’s Shrimp and Same-Thing-Murrays.

So, hopefully, this rain will soon get us out and “on the water”. 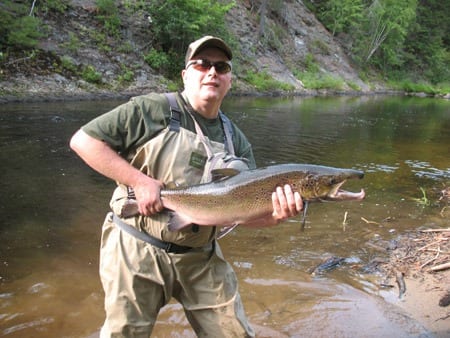 I was part of the 4 man group that did the doubleheader at Groundhog that Syd was talking about.  We did well on the first set of dates hooking into 9 fish but only landing 7 of them.  Most were hooked on bombers and Carter’s Bugs.  On the transition day we headed to Trout Fly shop to pick up a few flies and ice.. when we got back to camp there was a heavy rain shower.  The fish shut down.. I hooked the only fish on the second set of dates which came off when the big hen jumped out of the water and tossed the LT Special.  All kinds of fish in the pools, have some gopro footage.  This outing made 5 trips now to Groundhog for us over the years, the water was the lowest we have ever seen it and made for hard fishing.. the fish spooked easily.  Here is a pic of the big hook bill I landed using a Muddler.
Chad Hebert
~~~~~~~~~~~~~~~~~~~~~~~~~~~~~~~~~~~~~~~~~~~~~~~~
Hi Doug,
I volunteer with MREAC and we have had the best Swim Watch readings ever for the Miramichi River in 2015.  We would like to promote this to the fishing community and I thought I would ask for your help.  This is our Swim Watch program website http://mreac.org/project/swim-watch/

We have new data which shows the best readings in over a decade.  I talked to people all the time near the water and they don’t realize the river is “Safe to Swim”.  There is still a lot of negative perception and we would like to get the word out.  From four sewage treatment lagoons and strict industry standards we are doing a great job keeping our river clean.  The city won an award of Merit for its Wastewater treatment plant in 2001.  MREAC are doing a great job monitoring the water quality and they need to recognize the Swim Watch, River Watch, Real-time Monitoring and other programs.

ASF RESEARCH BLOG UPDATE
Another satellite tag has popped off, providing more data on the routes of wild Atlantic salmon at sea.
http://asf.ca/research-in-the-field.html

Bar Graph and Tabular Report of time series available by clicking on individual site name in the tabular report below. 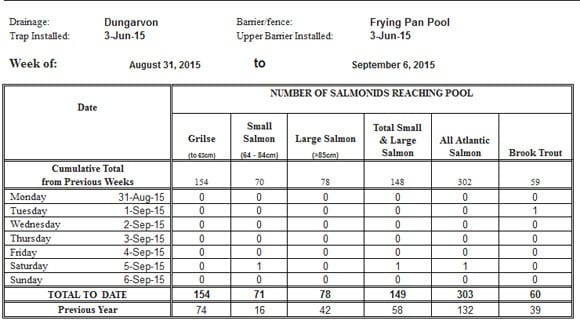 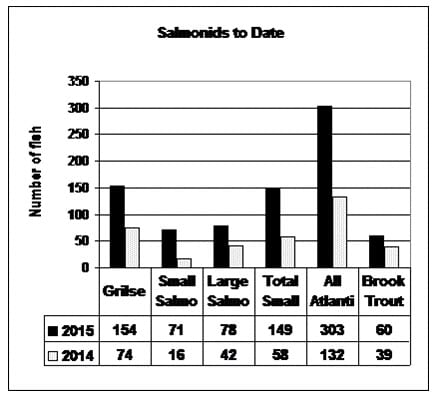 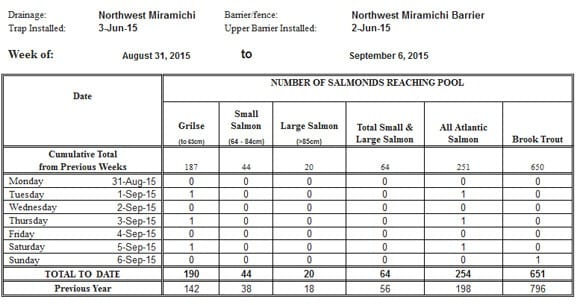 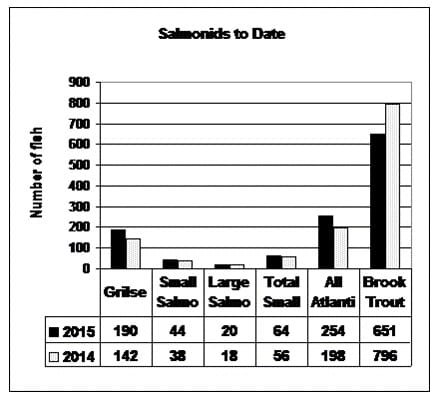