We’ve turned another page of the calendar as we move to September, and for anglers that means looking forward to some of the season’s best angling as we anticipate the “Fall Runs”.  Personally, I enjoy September fishing the most with the cooler days and Fall foliage.

As we move into the ninth month there is good news from DFO.  They have lifted the ban on the 23 cold-water pools , so that now angling is back to the normal seasonal angling in terms of times and closures.

Doug White’s Tammerack Sports Fly Shop in Juniper said earlier that angling there was almost non-existent with few anglers out and very poor angling conditions.  As such he decided that there was little use in trying to give a weekly report.  If things change, he would be back into the fold.  I mention this as I have received an e-mail wondering where his report had gone.

I must also apologize for my mistake last week regarding DFO’s announcement.  They had lifted the morning only fishing, but I had cut and pasted the list of the 23 pools that were still closed, and it had a statement in it that morning fishing was still in effect.  So, it was my ooops! 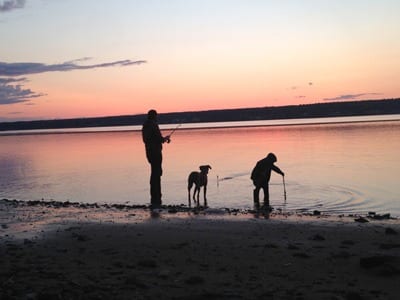 Salmon angling on the Miramichi River

Moncton – August 31, 2015 – Fisheries and Oceans Canada (DFO) wishes to inform the public that the angling restrictions to 23 salmon pools in the Miramichi River system has been lifted due to improved water conditions. This change will be in effect as of Monday, August 31, 2015.

The following 23 salmon pools are now open to angling:

Please note that the following salmon pools will remain closed until December 31, 2015:

To report any suspicious fishing activity, please contact the nearest Conservation and Protection detachment in the Gulf Region or call Crime Stoppers at 1-800-222-8477.

Fisheries and Oceans (DFO) regularly tag fish in experiments to record fish behaviour, movements, growth and fishing catch rates. The recovery of tagged fish and the success of such tagging campaign rely on the collaboration of recreational anglers and the fishing industry.

If you catch a tagged striped bass please take the following steps:

Address for the return of tags and information:

Country Haven Lodge below Blackville reported angling picking up as of Monday with a decent raise of water and cooler temperatures.  A couple of bright fish were hooked in the Rapids area, and some older fish were more active on the Cains. Since then, Country Haven said they were having a great week, hooking 70 fish in the last three days.

W. Doak and Sons in Doaktown said it has been a quiet week, but the water temperature has improved, but a good raise would be welcomed.  There are still good numbers of fish around, but most are pooled.  Anglers were picking up a few.  They were awaiting the Fall run to start.

Flies of choice were Same-Thing-Murrays, Undertakers, Bear Hairs and White-tailed Green Machines in wets, along with some Dry flies and Bombers as well as a few Fall patterns such as General Practitioners and Ally’s Shrimps starting to be used.

Derek Munn of Ledges Inn in Doaktown and Mountain Channel in the Rapids area said angling was tough with only an odd old fish being caught.  The water level was very low, but at least the temperature had improved.  They were praying for a good rain to raise the water as well as to bring in the Fall run.  There were good numbers of old fish around, but they were staying pooled.

Flies of choice were an assortment of Bombers.

Herb Barry Sr. of Herb’s Fly Shop on the Station Road in Blackville said there was not much angling going on at the moment, but he expected it to pick up with improved conditions.  There are still good numbers of fish around, although not many fresh fish yet.  But the Fall runs should be starting soon.  The water was cooler and had come up about a foot.

Flies of choice were White-tailed Green Machines, Shady Ladies and Green Rats, Blue Rats, Bombers and plenty of traditional Fall patterns to stock up on.

Curtis Miramichi River Outfitting in Blackville said fishing was good with decent numbers being hooked.  The water temperature had improved and they had received a small raise in water levels, but more was certainly needed.  There was the odd fresh fish, but most of the catches were older fish that have been in the system.  They were waiting for rain and a good Fall run.

Flies of choice were White-tailed Green Machines, Shady Ladies, Brown Bombers with orange hackle and a few Fall patterns such as General Practitioners and Ally’s Shrimps.

George Routledge of George’s Fly Shop at the Mouth of Renous in Quarryville said there was no one fishing as the water had been low and very warm.  However, heavy rain in the Minto area recently has poured into the Cains River and from the Mouth of the Cains down, the Main Southwest received about a foot raise of water.  This plus cooler night temperatures have vastly improved angling conditions, so George was hoping to see more anglers out for Fall fishing.

Flies of choice were White-tailed Green Machines, Black Ghosts, Green-butt Bear Hairs, Red-butt Bear Hairs and Shady Ladies.  AS well it is time to stock up on traditional Fall patterns.

Jim Laws of Miramichi Hunting and Fishing in Newcastle, Miramichi reported very few anglers out and very few fresh fish coming in yet.  There was only the odd report of fish being caught.

The Striped Bass angling has also be slow, but the Tracadie-Neguac areas were getting some.  However, the bass had not moved to Miramichi yet.

Syd Matchett of Trout Brook Fly Shop on the Northwest Miramichi said angling conditions had improved and anglers that were out, were catching fish.  A crew at the Ground Hog Crown Reserve Stretch had landed seven and lost two, and were so pleased that they applied to continue their stay since the next date was open.  Another anglers and his wife hooked two salmon and a grilse one morning, while another couple landed 13 over several days.  Although water temperatures had improved, the river could use a nice raise in water to really kick-start the Fall.

Flies of choice were an assortment of Dry Flies and Bombers.  In wets, it was small black bugs and White-tailed Green Machines.

Debbie Norton of Upper Oxbow Outdoor Adventures on the Little Southwest Miramichi said there was not much angling going on , but she expected it to pick up soon with the anticipation of the Fall run which she predicted to be at its prime around September 20.  There are still good numbers of old fish in the system which should be livelier with improved conditions.

Flies of choice were big Marabous.

So  as conditions improve and hopefully the advent of Fall runs beginning, it is time to get out and “on the water”.

Beginning at 4:30 pm with a Meet n’ Mingle and followed by a buffet dinner and the induction ceremony itself, the evening promises to be a memorable one with a variety of silent, Chinese and live auctions, great food and, in particular, heartfelt tributes to five individuals whose lives have been intertwined with those of the Atlantic salmon.
This year our five inductees are:

Tickets for the October 3 Hall of Fame Induction Ceremony are now on sale for $75 but with only a limited number available, it’s wise to reserve yours quickly.  For more information or to reserve your tickets, please contact the Atlantic Salmon Museum at 506-365-7787 (Toll Free at 1-866-725-6662) or at .

We look forward to seeing you there!