Two T-Wolves on the Roster for Eastern Canada Cup Tournament 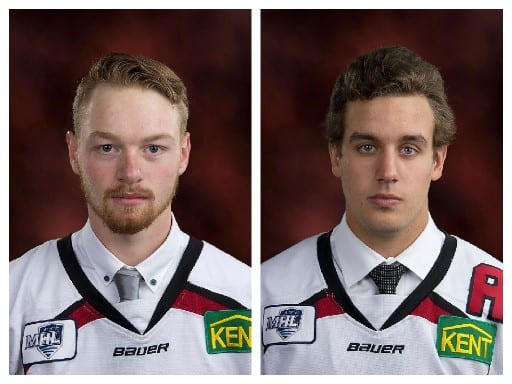 Congratulations to Miramichi Timberwolves players Tanner Somers and Lee Dower on being selected to represent The MHL at the Eastern Canada Junior A Challenge, November 16-18, in Cornwall, ON.

The Maritime Junior Hockey League (MHL) is proud to announce the players who will make up its entry in the 2015 Eastern Canada Challenge Tournament. This will be the first time in which the MHL participates in the tournament, which will be held in Cornwall, Ontario from November 16-18. The group will be led by the coaching staff of Shawn Evans (Truro Bearcats), Nick Greenough (Valley Wildcats) and Josh Hepditch (County Aces). Equipment manager Steve Lindsay (Truro Bearcats) and therapist Ashley Merrithew (Dieppe Commandos) round out the staff.

Each team in the league is represented by a minimum of one player. Despite that stipulation, MHL President Dave Ritcey was quick to point out that selecting the team was no easy feat by our selection group.

“The selection process for Team MHL was just another indicator of the quality and quantity of talent that exists within our league,” Ritcey said. “A number of tough decisions had to be made. In reality, we could’ve sent two competitive teams to this tournament. Perhaps in future years, we will explore that option.”

The Eastern Canada Challenge is one of the most heavily scouted Jr.A tournaments in North America with scouts and recruiters from the CHL, CIS, NCAA Division I and III schools as well as the Canada East coaching staff on hand to evaluate the talent.

It’s an opportunity that Ritcey feels the league will benefit from in the long term.

“Our primary focus, as a league, should be to provide every opportunity for our players to showcase their talents at as prominent a level as possible,” he said. “The entire MHL is excited to participate in the Eastern Canada Challenge and it’s our hope that our presence only expands going forward.”

Below is the Team MHL roster for the 2015 Eastern Canada Challenge: