Memories of an Air Force Brat 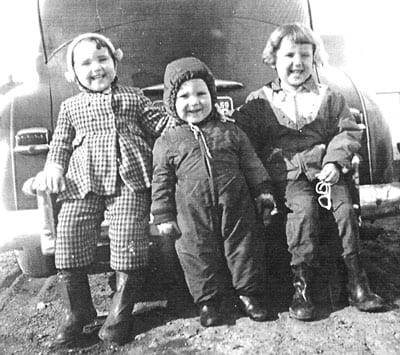 Jackie, Billy and Debby Bowie at their home on the base in Chatham at 422 Edmonton Crescent.

They called us Air Force brats. I think it was because there were so many of us. The streets were always full of kids and some, not all, were a little mischievous — just a little. My dad was in the Air Force and we were fortunate in that we only got transferred once. Transferred meant you had to pick up all your belongings, your wife and children and move to another base, short for airbase. We started in Chatham at CFB (Canadian Forces Base) Chatham. Maybe it was because Daddy was from here, born and raised in Oak Point. Mom was born and raised in Sevogle.

At the time Dad joined in the ’40s, there was no “Armed Forces”. It was the Air Force, the Army and the Navy. He became a pilot. Then he quit and joined again as an airplane mechanic. That’s when we came in, six of us: Lynn, Sandy, Charles, Debby, Jackie and Billy. My first memories are from when we lived on the base at 422 Edmonton Crescent. We walked to classes at D.L. MacLaren School. I don’t remember much about that school. My first grade teacher’s name was Astrid Gibbs. She was pretty, unmarried and gave me a lovely card when I made my first communion. My second grade teacher was Hilda Hickey Watson. Imagine the impression she left on me. She was big and she had freckles and red hair. I remember being a tomboy, playing with the boys and not the girls. (I knew what I was doing.) My oldest sister was seven years older than me, so by the time I started school she was 13 and too old to hang around with us. That left me with two older brothers, so I kind of followed along.

It was lovely living on the base. You had the canteen, the theatre, a swimming pool and gym. Because there were so many kids, the older kids looked out for the younger ones so we had more freedom. We were allowed to go further than the end of the street because there was safety in numbers. It was in the early ’60s and there wasn’t much talk of people taking you away in a car.

On Saturday all six of us were given a quarter and we got to go to the show. It didn’t matter what was playing we were always excited. Lynn got the job of looking after us. Ten cents bought you your way into the movie and you could buy all kinds of things for 15 cents — pop and chips, or pop and candy, or candy and chips … you see where I am going with this.
The church was close to our house. There was a Catholic Church were we went and a Protestant Church. I don’t remember even thinking about the Protestant Church. I remember the Catholic Church because Mom and Dad would take us to church and you couldn’t talk, and I really really like to talk. We had to wear a scarf and if we didn’t have a scarf Mom would take a bobby pin and pin a Kleenex to your head. We weren’t even embarrassed by this. Anyway if one of us was bad in church, and inevitably there was one who couldn’t quite make it through the hour, Mom would march the rest of us down the aisle to the entrance, close the door, spank the offender and take us back in. Well … we had to be quiet and if you had been spanked, you were swallowing the tears and the boo-hoos, let me tell you. Mass was in Latin back in those days. Imagine that, being five years old and trying to be good, all the time listening to this old guy talk in a foreign tongue. I think I learned to be good about the time I got married.

There were wonderful playgrounds on the base. With all those kids, they needed something. There were teeter totters, swings, monkey bars. I broke my arm on a monkey bar, swinging from my knees and trying to swing out and land on my feet and going straight down instead. My sister broke her arm on a bicycle. She went one way and the bike went the other. We were lucky. These were the only two bones that got broke and man we played hard. We were outside from daylight til dark and Mom had to call us in at night. 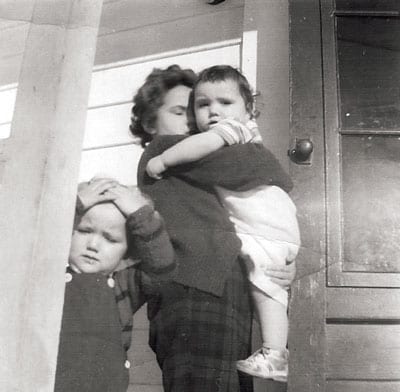 Debby’s sister Lynn holds Jackie while Debby stands beside them.

When we were in Chatham, Dad went away several times on course. One time he went to Winnipeg. While he was there, he was in a car accident and broke some ribs and I don’t know all the injuries he had. When I look back now, poor Mom stuck at home with six kids and not being able to go to the man she loved who was injured half a country away. He wrote us all the time and sent poems. He was a wonderful poet. I remember he sent slippers to Lynn that he made her while he was recuperating. Imagine all the wives — most with more than four children — when their husbands were sent on course.
I remember the big siren going off meaning there was an “Alert” and you had to hide in the basement and cover the windows. You had to have food down there because you never knew how long you were going to be there. These “Alerts” happened quite often. I guess it was still so close to the war and they wanted us to keep our guard up.

We got transferred to Bagotville. Dad had put off being transferred a couple of times because he was an only child and his parents were not well. He thought it would be beneficial for us to move to Quebec because we might learn French and experience another culture. We lived at 500 Laurentian. The house was green. It was the first house on the street, right across from the Catholic Church, a short walk for Mom to take her now seven children. Yep, Dorothea slid in there around 1964 about seven years after Billy.

I have more memories of Bagotville because of course I was older. We were there three years. And we had all the amenities of every air base. We had the canteen, the theatre, the pool, the gym, the playgrounds and the rink. Oh, and the library, I read so many books. I read the Wizard of Oz for the first time. Swimming was my thing. I loved it. I spent every minute I could at the pool. My dad even paid for me to get private lessons. I remember the way you laid your towel on the floor and put your wet bathing suit in the middle, folded over each side and rolled it up and put it in the bag to take home.
When we went to Bagotville, we went to a Catholic School and had to wear uniforms. This was quite a shock from Chatham where Jackie came home without her jacket and shoes half the time. The girls wore navy blue jumpers over white blouses and the boys wore grey flannels with white shirts. When you got to the higher grades like Lynn you got to wear a skirt instead of a jumper. I liked having the uniforms. You never had to guess what you were wearing the next day. My grade 3, 4 and 5 school pictures had me wearing navy and white.

The air base sported a “Teen Town” and the church had a youth group. We had school and playing, and playing and school. And we stayed outside from daylight to dark, winter and summer until Mom called us in. I remember the inevitable freezing your tongue to the railing on the step and the snow forts and tons of kids from our street and the next one. We spent a lot of time at the rink in Bagotville. Billy and Sandy were in hockey and Mom worked in the canteen.

Dad was a musician. He played the fiddle, piano, guitar, saxophone, and of course had the most wonderful voice of anyone I have ever heard. Many a night we stayed up on the stairs listening to the music until we were forced to go to bed. In order to sleep you had to put a pillow over your head. What fun!

We spent three years in Bagotville and then came back to Chatham. The memories are wonderful to think about and I wonder if I would have wanted anything different. No, not on your life.