Dr. Carol Christiansen, Curator and Community Museums Officer at the Shetland Museum and Archives, in her latest book, Taatit Rugs: the Pile Bedcovers of Shetland (published in 2015 by Shetland Amenity Trust – ISBN 978-0-9932740-4-6) features an unusual New Brunswick Museum (NBM) artifact – an embroidered counterpane (or bed rugg). Originally donated as a floor covering by Margaret Keay and Janet Keay in 1961, its real function as a bedcovering was explained in the early 1970s when it was included in an exhibition on American bed ruggs at the Wadsworth Athaneum in Hartford, Connecticut. It was also featured on a Canada Post stamp in 1993.

The counterpane’s unusual production method – a double-looped embroidery with a short pile rather than the more common hooking – makes it a unique survivor among the New Brunswick Museum’s extensive bedding collection. Dr. Christiansen’s research on the “heavy woollen woven bedcover (rug) to which threads (taats) have been applied” led her to this wonderful early example.  Her interest has greatly expanded our understanding of the complex histories associated with heritage objects and has provided a revealing glimpse of Scottish immigration to the province.

At the time of the counterpane’s donation to the NBM, it was said to have been used by a Hutchison family of the Miramichi region of New Brunswick.  Further inquiry revealed that the great-aunt of the donors was Elizabeth Stuart (Stewart) Mackie (c. 1817-1867) who married Richard Hutchison (1812-1891) of Douglastown, New Brunswick, on 20 March 1843.  Richard Hutchison was born in Glasgow, Scotland, and immigrated to New Brunswick in 1826.  Elizabeth Stuart Mackie is said to have been born in Aberdeen, Scotland – her father was Alexander Mackie (c. 1781-1858) a native of Leith who had lived in Aberdeen and his wife, Elizabeth Stuart (Stewart) (c. 1782-1854).  The 1851 census indicates that they had immigrated to New Brunswick in 1832. Though not conclusive, this certainly gives our bedcovering a very strong likelihood of originating in Scotland and it significantly enhances the New Brunswick Museum’s ability to represent and discuss aspects of cultural transfer in the mid-19th century in the province. 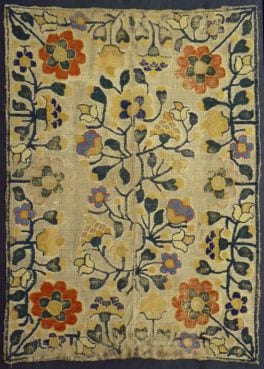 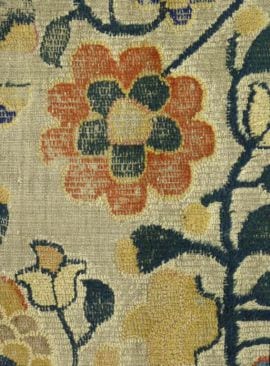 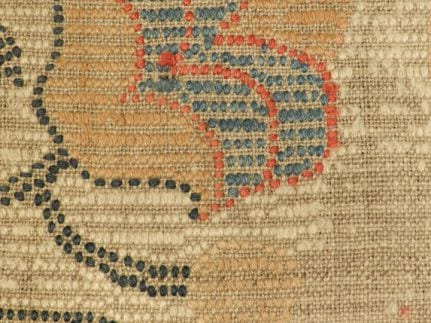