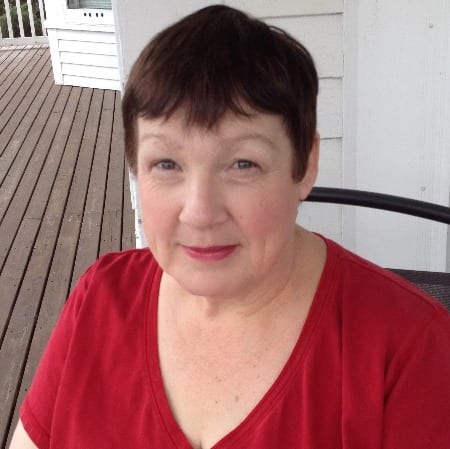 Miramichi author Valerie Sherrard has written more than a dozen novels for young people, including Counting Back from Nine, which was short-listed for the Governor General’s Award and The Glory Wind. Her work has also been short-listed for numerous Canadian awards, including the Ann Connor Brimer, Red Maple, and Snow Willow Awards.

Miramichi Reader: Valerie, please tell us a bit of your background.

Valerie Sherrard: My father was in the Canadian Air Force (back before they were combined under one umbrella) and so we moved a good deal. While he was from Miramichi, I was born in Moose Jaw, Saskatchewan, and spent my younger years in Belleville, Ontario and then Lahr, West Germany. We settled back in Miramichi when I was 14 and, aside from a few years away as a young adult, this has been my home ever since.

“The thing I’m most proud of is when a story works the way I want it to, when the characters come alive and the finished product is at least close to what I hoped it would be.”

MR: I am always interested as to when and how the inspiration to be a writer comes about. Tell us your experience.

VS: It was in Lahr that a teacher, Mr. Lower, singled me out and told me I could be a writer someday. I can’t imagine what he saw of any value in anything I might have written at that age, but he encouraged and praised me and inspired the first thoughts of someday writing books. I’d always been a good reader, but it had not occurred to me that I might also be a writer.

I wrote my first book (many years later) and sent it off to a handful of Canadian publishers, and three of them asked for the full manuscript. At that time, I thought back to my teacher, and I was able to locate him. I contacted him and we formed a friendship between then and his passing a few years ago. My fourth Shelby Belgarden mystery, called Hiding in Plain Sight, is dedicated to that teacher.

MR: When did you get your first big break in publishing?

VS: I was very fortunate in that, once I got serious about writing, and found the genre that was right for me, my very first manuscript got the interest of a publisher that signed it, and subsequently went on to publish more than a dozen of my books for young adults. Since then, I have worked with five different publishers and am always looking for additional homes for my work. I have expanded to stories for all ages of children, as well as different styles and genres. For example, my GG nominated title (Counting Back from Nine) was a free verse novel. Really, as is true for many full-time writers – it’s not so much a matter of getting a big break, as just working steadily and doing your best to produce good work.

MR: Talk about your husband Brent Sherrard (who is an author as well).

VS: It’s interesting that both Brent and I are writers. When we first met we were both unpublished but shared an interest in writing. I got serious about it first but he was working on stories long before he was first published. He kept writing new stories, and I think he had a half a dozen finished novels written before I talked him into submitting one to publishers. He got an offer not long after that, and he’s now had three novels for teens published, but he continues to write a lot more than he submits. If he’s not happy with a story he’ll let it sit and go back to it later – usually after he’s written another whole novel at least! My philosophy is quite different – once a draft is done, I want it off my desk. I figure an editor will see and discuss revisions.

MR: What literary accomplishment are you most proud of?

VS: It’s nice to have your work recognized and awards are nice – I’m always pleased with nominations and awards, but the thing I’m most proud of is when a story works the way I want it to, when the characters come alive and the finished product is at least close to what I hoped it would be.

MR: The Young Adult genre: why the focus on it (as opposed to adult lit)?

VS: They tell you to write what you know, so starting with the young adult genre was a natural fit for me. I worked as the Executive Director of a group home for young people for a dozen years, and besides raising my own children, I fostered approximately 70 teenagers in my home over a decade and a half or so. Young people had been a huge part of my life and so when I began to write, it was stories for and about them that I wanted to tell. It feels like the right choice for me.

Thanks for your time Valerie!