Miramichi Fishing Report for Thursday, May 12, 2016

Spring salmon season is winding down, and shifts from catching and releasing 10 a day to the Bright season on May 16 when four a day is the legal hook and release maximum.  May 16 is also the official opening date for lakes.

May 16 also sees the Renous River shift from fly-fishing only to the trout season when other gear may be used until May 31 up-stream from the route 8 bridge.  June 1 it returns to fly-fishing only, although trout may still be caught on flies according the regular daily bag limit which is also in effect during the period between May 16-31.

Striped Bass retention period continues until May 29 when anglers are allowed to keep one a day between 50-65 centimeters.  But remember the POSSESSION limit is ONE.  Never have two or more in your possession.

W. W. Doak and Sons in Doaktown said the spring salmon season was winding down, but there were still a few fish around, particularly down river from Doaktown.  There were some black trout reports, but no report from anglers fishing brooks.  It was getting to the “in-between season when spring salmon fishing is pretty well over and anglers are waiting for the run of bright sea trout.  Anglers were shifting to sinking leaders.  Over all, the spring salmon season was a very good one with very good numbers of fish and a lot of happy anglers.

Flies of choice were Muddlers, Trout Streamers and some larger summer patterns such as Green Machines and Butterflies.

Derek Munn of Ledges Inn in Doaktown and Mountain Channel in the Rapids area said the spring salmon season was pretty well over, but there were still some fish around.  They had very good fishing this past Sunday.  There were a few dark trout being hooked.  The water was low for the time of year, but still a decent height, very clear and cold. 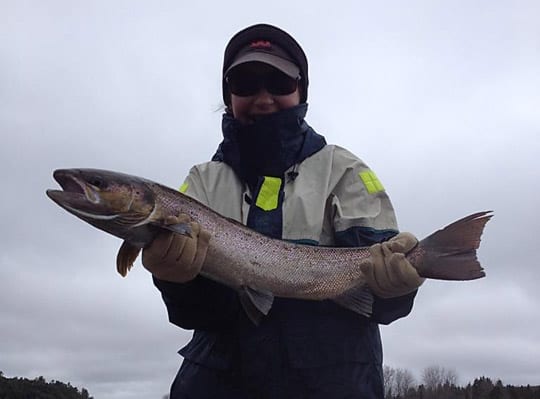 Herb Barry Sr. of Herb’s Fly Shop on the Station Road in Blackville said anglers were still catching some salmon and grilse, but no huge salmon.  However, there were good trout reports with catches ranging from 12-18 inches.  Recent rains had raised the water some, but it is still low for the time of year.  However, anglers are still able to use motorboats to get around.

Curtis Miramichi River Outfitting in Blackville said there were some, but not a lot of salmon and grilse being reported, but good numbers of trout being caught, some in the four to five pound range.  The water had raised some and was a decent level.

Jim Laws of Miramichi Hunting and Fishing in Newcastle, Miramichi reported a few spring salmon still around, but there were not a lot of salmon anglers out.  There were some good sized dark trout, but very few smaller ones reported.   Most anglers were now switching to Striped Bass, and this week has produced some very good results.

Flies of choice were Renous Specials and Black Ghosts.

Syd Matchett of Trout Brook Fly Shop on the Northwest Miramichi said spring salmon were still around in decent numbers, with some big salmon in the 39-40 inch range being reported.  A group of anglers from the Caraquet/Shediac areas were up for the weekend and landed 20 salmon and grilse.  One angler went home with a 5 ½ pound trout caught on a Winnipesaukee Smelt tied by Syd himself.  The water was a good height, cool and clear, but a little low in places for running motors.  But Canoeing was great.  There were no fiddleheads yet.

Debbie Norton of Upper Oxbow Outdoor Adventures on the Little Southwest Miramichi said there were still some spring salmon around, but things were winding down.  There were a few dark trout in the 14-18 inch range.  Tuesday of this week saw two smolt wheels installed and working at Trout Brook on the Northwest, and on Wednesday two were put into operation at Upper Oxbow on the Little Southwest.  The counting fences will also be in operation this season at Cassilis on the Northwest and at Millerton on the Main Southwest.

There is a seven-step program which will be in place for this season.  It is called Collaboration Atlantic Salmon Tomorrow (CAST) sponsored by MSA, ASF, Canadian Rivers Institute (with Drs. Rick Cunjak, Allen Curry and Tommy  Linnansaari ), Cooke Acqua. and J. D. Irving.

The first step will see a total of 2,500 smolt split between the Northwest Miramichi and Little Southwest Miramichi taken to the hatchery in South Esk where they will be kept and raised.  More on this program in the next few weeks.

Flies of choice were Rose of England, Cock Robin and Renous Specials.

So with lots going on in the river system, it is time to get out and “on the water”.

Deals 4 U, Bradford Burns’ Closing the Season and Miramichi Marine.

Thought for the Week: “Give a man a fish and he has food for a day; teach him how to fish and you can get rid of him for the entire weekend”.  ~ Zenna Schaffer

May 11th Fly Fishing at Limestone
There’s still time to sign up for next week’s fly fishing event at Limestone!  Contact Bob Hoffman () for more information.
Read on »