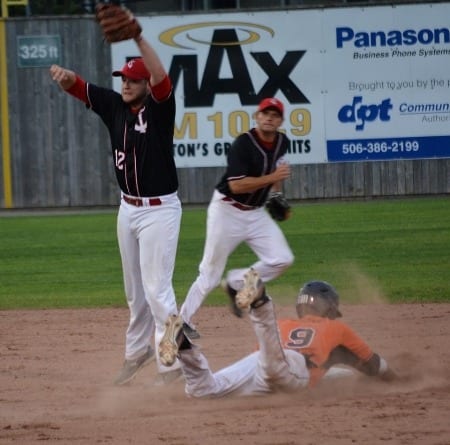 Spencer Stokes #9 steals second base as Tyler McKay leaps for the ball. Backing up the play is Gary Ryder as the Ironmen won 6-1 on Tuesday night. Photo by Brian Richard.

Gary Ryder was 3 for 3 with a double, Orry Cook 2 for 4 with a stolen base, and Junior call up Mike Mckay had a two run double.

Their next game is in Saint John tonight, Thursday August 18th starting at 8 pm.

The Ironmen next home game is a double header with Charlottetown on Saturday August 20th with Game 1 starting at 2 pm.