THIS WEEK’S KEY WORD IS “IMPROVEMENT”.  With cooler temperatures and some rain, angling and angling conditions have improved this week.  First, the Cold-Water Pool closures have revoked and are now open to regular angling.  The Southwest Miramichi water levels have increased by 2 feet in the Blackville area and about 15 inches in the Doaktown area.  The Northwest Miramichi, however, did not fare as well getting only a 4-inch raise, but rain Wednesday could possibly change that for the better.  The Little Southwest received about a foot raise.

This message is to inform you that as of Tuesday, August 16, 25 cold water pools will be reopened to fishing on the Miramichi River system (3 pools remain closed as per normal schedule). A variation order was just issued today to this effect (see attached), and a notice to anglers will be published shortly on the regional DFO Internet at http://www.inter.dfo-mpo.gc.ca/Gulf/FAM/Recreational-Fisheries (under the ‘salmon’ headline). These reopenings are triggered under the warm water protocol in place on this system, as in date of this Monday, we had two consecutive nights that the water temperature in the Main Southwest Miramichi stayed below 20C, we received some good rain and our staff on the field observed salmon moving out of cold water pools.

Doug White’s Tammerack Sports Fly Shop in Juniper said while there has been a fair run of salmon around not many people were fishing, but now he expects a run on the river with the raise of water and the new salmon coming in, so get out and fish while you can as this may be the last good water we’ll have.

W. W. Doak and Sons in Doaktown said angling had certainly picked up from last week with a nice raise of water.  Fish were moving from the cold-water pools and were being caught.  A few anglers reported that they had limited out.  The numbers between salmon and grilse caught were about even.  There were a couple of salmon reported in the 25-pound range.  Reports were good from the Southwest Miramichi, the Cains and the Dungarvon rivers.  One local angler was into 11 fish in three days.  With more rain yesterday, angling should continue on a positive note.

Derek Munn of Ledges Inn in Doaktown and Mountain Channel in the Rapids area said angling was good on Monday and Tuesday with water levels at perfect heights.  Anglers were catching a good mix of salmon and grilse as the fish were moving from holding in the cold-water pools.  With more rain yesterday, conditions should stay positive for a while.

Herb Barry Sr. of Herb’s Fly Shop on the Station Road in Blackville said the water had come up about 2 feet and fish were starting to move and take.  One angler hooked three salmon on Saturday.  Some anglers were even using motor-boats.

Curtis Miramichi River Outfitting in Blackville said water levels were up quite nicely and fishing was good with good numbers being hooked.  Canoeing conditions were also very good, especially with a full moon and nice weather for the weekend.

Jim Laws of Miramichi Hunting and Fishing in Newcastle, Miramichi reported better water levels, particularly on the Southwest Miramichi.  Over all a few fish were starting to be caught.

Flies of choice were White-tailed Green Machines, Black Ghosts, Same-Thing-Murrays and some Bombers.

Syd Matchett of Trout Brook Fly Shop on the Northwest Miramichi said things were improving over the last couple of weeks with cooler temps and a 4-inch raise in water, not counting rain on Wednesday.  The ground took most of the water from recent rain, but Wednesday’s should produces a decent raise and provide for good weekend fishing.  A couple of fish were hooked on the weekend and another was hooked at Wayerton Tuesday.

Flies of choice were Bombers and dark wets such as Undertakers, Shady Ladies and Black Bugs on no. 6 hooks.

Debbie Norton of Upper Oxbow Outdoor Adventures on the Little Southwest Miramichi said the water had come up about a foot and was cool.  Fish were beginning to move and they were catching a few.  Jacquie Girouard had picked up several on Jacquie’s Blue Charm and her husband Fernand made their anniversary complete with a fish on Monday evening.  They had also seen some fish on the Northwest.  Howie Gould had a good weekend on his rendition of the White-tailed Green Machine with Rabbit Fur and Blue Angel Hair.

Flies of choice were as described above.

So with better water levels, better temperatures and fish on the move, it is time to get out and “on the water”.

Thought for the Week: “Fish may be bought if they can’t be caught”. – Gene Demers 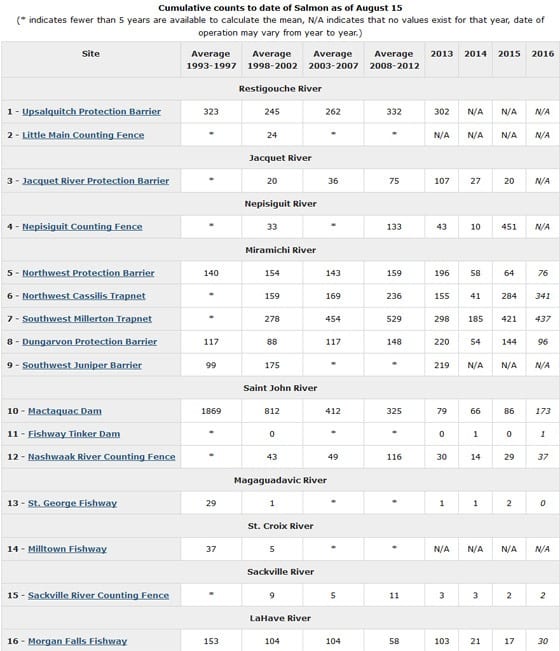 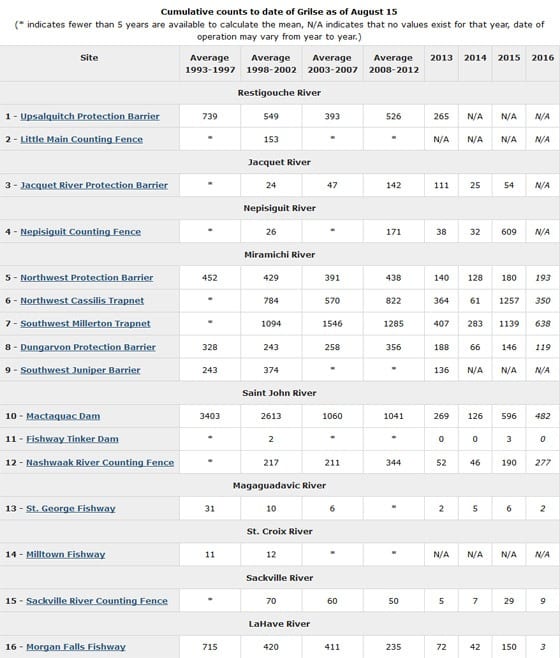 Click below for Dungarvon and Northwest Miramichi Barrier reports for August 14.

Now is the time to get out on the river!! We hit it spot on last evening having landed many fine salmon like this, we landed 7, lost a few, raised a bunch with a great many pulls that sent our lines careening back into our faces! We even had a double header that had our guide hopping about trying to manage landing two fish at once! As you can imagine there was lots of chaos and laughter on the night!…. It was a fantastic evening on the Miramichi!

Below, my friend Andrew with one of several fine fish brought to hand 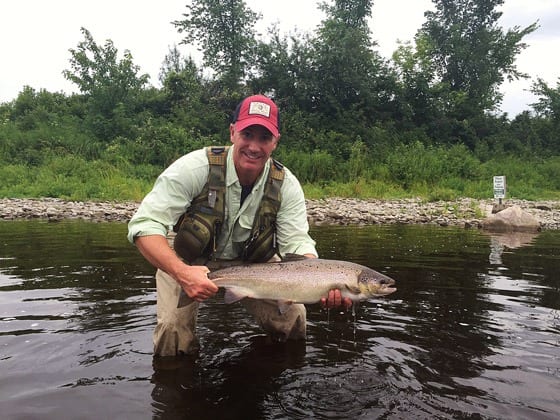 Lots of fish moving in the river and many great days ahead!