Angling for Late August continues to be quite positive, particularly on the Main Southwest Miramichi.  Rain Wednesday evening and Thursday should keep water levels and temperatures right for fishing.  Depending on the amounts of rain, it may take a day or two for most pools to be fishable.  There have been some Fall hook-bills caught.  And we are awaiting the Fall runs to come. 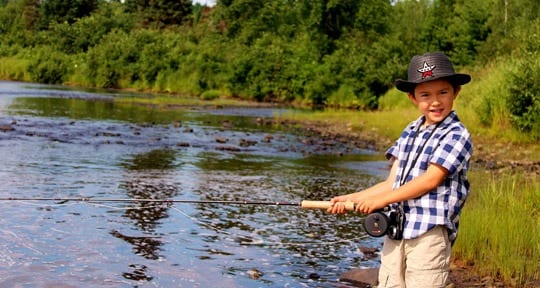 Kyle Curtis (all the way from Japan), fishing the Cains, while on vacation. (Wynn Curtis photo)

Doug White’s Tammerack Sports Fly Shop in Juniper said the water is up a good pitch and it seems some fish showed up on it. Still not many fishing although it’s reported the fishing is quite good.  Just because fish NEED to be released, people should really try and get out and fish while we are still allowed to use hooks.

W. W. Doak and Sons in Doaktown said water conditions were very favourable and there were quite a few fish around.  Considering it was late August, the over all scene was very good.  Although there were good numbers of fish around, most were not fresh into the system.

Flies of choice were mostly wets such as White-tailed Green Machines, Same-Thing-Murrays, Undertakers, Bugs, Stone Flies, and a few Fall patterns along with a few Bombers.

Derek Munn of Ledges Inn in Doaktown and Mountain Channel in the Rapids area said they had another good week of fishing; averaging six to eight fish a day between four rods.  One evening, they hooked 13 fish.  There was a good mix of grilse and salmon with tall of the salmon between 12 to 16 pounds.  There were a few fresh fish in the mix.

A guest at Ledges Inn in Doaktown releases a nice fish. Notice in the close-up that the fish is a fall hook-bill (Derek Munn photo)

Herb Barry Sr. of Herb’s Fly Shop on the Station Road in Blackville said fish were going.  One angler had lost a salmon Tuesday, and Barry had heard of other salmon being caught.  He had not heard of any grilse being hooked.  Water conditions were good, but the fish must be on the move as not a lot were showing.

Curtis Miramichi River Outfitting in Blackville said angling was good.  Water conditions were also good, although perhaps a tad high in some places.  They said that about 90 per cent of anglers into the shop had been into a fish sometime in the week.  There seemed to be more salmon than grilse.

Flies of choice were White-tailed Green Machines, Same-Thing-Murrays, Bombers and a few Fall patterns such as General Practitioners and Ally’s Shrimps on mostly no. 6 hooks with a few 4S and 8S.

Jim Laws of Miramichi Hunting and Fishing in Newcastle, Miramichi reported angling as a bit poor on the Northwest and Little Southwest while the main River was better.  Water conditions were up a tad on the Main Southwest, but generally good.

Flies of choice were Dries and Bombers, along with White-tailed Green Machines, Same-Thing-Murrays, Undertakers and Bear Hairs.

Syd Matchett of Trout Brook Fly Shop on the Northwest Miramichi said before the rain last week, angling had been good.  Fish were moving after the rain, but there were still some throughout the system.  Jamie Murphy had hooked one Sunday, and Thursday to Sunday last week was good, but after Sunday, it shut down.  One party at the Elbow Crown Reserve did not catch a fish.

Flies of choice were mostly dark wets such as Undertakers, Same-Thing-Murrays, Shady Ladies, Bear Hairs, and a few Bombers as the water dropped.

Debbie Norton of Upper Oxbow Outdoor Adventures on the Little Southwest Miramichi said they were still doing well.  Howie Gould and Paul Elson had a good weekend, and a lady angler named Daphne from Vancouver caught two fish on Monday.  Another caught a salmon last Friday with sea lice on it on the Northwest Miramichi.  Last Wednesday and Thursday had also been good.  Water conditions were both a good temperature and a good height.

So with good water levels to bring in fish and good temperatures, it is time to get out and “on the water”.

Thought for the Week: “George Washington couldn’t have been a fisherman.  He never told a lie.”  -Jeffery Kreismer

In another development, a land-based salmon farm in Poland named JURASSIC SALMON is now producing for the market.
http://jurassicsalmon.pl/en/

Click the links below to view Dungarvon and North West Miramichi Barrier Counts: