Generally, the beginning of September has produced some good fishing.  Water conditions have been good, although warmer weather earlier this week is beginning to slow the activity somewhat.

Minister of Fisheries and Oceans Dominic LeBlanc has made an interesting change to the striped bass angling season earlier this week.

Today, the Honourable Dominic LeBlanc, Minister of Fisheries, Oceans and the Canadian Coast Guard, announced that the retention period for the Southern Gulf recreational Striped bass fishery will be extended. The final retention period will now run from September 2 to October 31, during which time each person is allowed to keep one fish per day.

In the spirit of increasing Indigenous access to the Striped bass fishery, the Minister has also asked the department to negotiate enhanced Food, Social and Ceremonial (FSC) access to the fishery for interested Indigenous groups.

Over the coming months, the department will consult with recreational fishing groups, provinces, Indigenous groups and others with an interest in the fishery to develop a new management plan for the 2017 fishing season and beyond.

“‎This decision will have a positive impact on local communities and demonstrates our commitment to the importance of our relationship with Indigenous groups and others. It will also mean more people will be out on the water, helping to curb potential poaching. I wish to commend the hard work and dedication of my caucus colleagues, Acadie-Bathurst MP Serge Cormier and Miramichi- Grand Lake MP Pat Finnigan who have dedicated a lot of work to this file. Thanks also go out to all the groups who have voiced their views during consultations with my department.”

However, no mention was made regarding the possession limit, an item that must be clarified.

Another interesting development is the implementation of the “Live sonar imagery of fish tracking in Blackville, New Brunswick, Canada”  The link to check this out is: https://www.youtube.com/watch?v=Kp8UF9F3uZQ

Doug White’s Tammerack Sports Fly Shop in Juniper said “Hi Doug: This is my final report, such as it is. This has been a repeat of 2015 as far as I can see. The DFO have succeeded once again in driving people away from the river. All it would take would be a tag or two and the anglers would return. There are members of the fishing community, under the guise of caring, that believe the salmon are there only for the rich and to line their pockets while the residents should go without.  How many years will the people of the Miramichi need to bow and scrape before they say “enough is enough”. Nobody fishing. See you next year…at least till the end of June.”

W. W. Doak and Sons in Doaktown said there were pretty good numbers of fish around and pretty good fishing.  The water was a good height and temperature, although Tuesday and Wednesday’s heat was starting to affect the catching.  There was a good mix of salmon and grilse above Boiestown right down to Quarryville.  One angler had hooked 12 fish over several days.

Derek Munn of Ledges Inn in Doaktown and Mountain Channel in the Rapids area said they had another great week of fishing. The last group in (5 people in total) hooked 37 fish, landing 22. Things have slowed down the last couple of days with the heat. Some more rain would be welcomed. Mountain Channel has been slow with not many new fish entering the system.

Joe Palmer caught a salmon on a blue bomber and said this trip was the best dry fly fishing he has ever experienced.

Flies of choice were Blue Bombers. 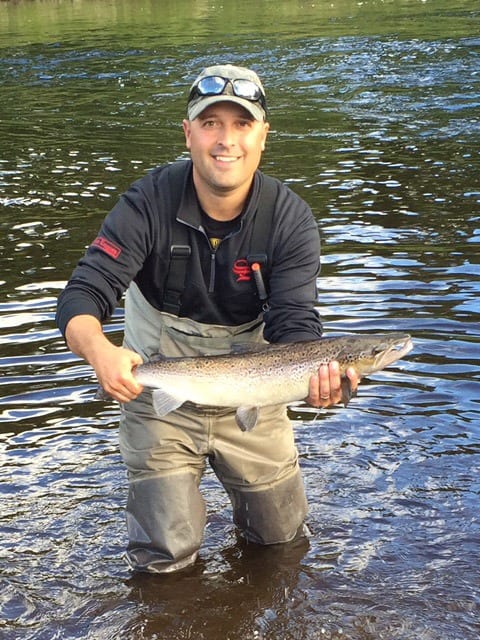 Herb Barry Sr. of Herb’s Fly Shop on the Station Road in Blackville said anglers were getting some fish.  He had heard that some grilse had moved through Sunday evening, and one that was caught had sea lice.  There were fish also being caught on the Cains River, but they were not fresh fish.  The water was a good height for fishing and temperatures were good before the heat came.  There were not a lot of anglers out, but those who were seemed to be having luck.

Curtis Miramichi River Outfitting in Blackville said there were all kinds of fish around, but they were not taking with the advent of the hot days early this week.  Prior to that, the weekend had been good.  The water was a good level, but starting to drop late Tuesday with the heat.  There seemed to be more salmon than grilse being seen and caught.

Jim Laws of Miramichi Hunting and Fishing in Newcastle, Miramichi reported angling a bit slow on the Northwest, but better on the Main Southwest Miramichi.  The Northwest was getting down and a good rain was needed.

The striped bass were coming back and had reached the Neguac area.

Flies of choice were mostly Bombers and Dry Flies along with a few Fall patterns such as Alley’s Shrimps and General Practitioners.

Syd Matchett of Trout Brook Fly Shop on the Northwest Miramichi said angling had been good.  Gordon Day had hooked four salmon at Wayerton on the weekend, two of which measured 40 and 36 inches each.   Robert Whitney hooked four salmon at the Ground Hog Landing Crown Reserve Stretch on Saturday through Sunday, and there were a few grilse reported here and there along the system.  The water was getting low again, and rain is needed.

Debbie Norton of Upper Oxbow Outdoor Adventures on the Little Southwest Miramichi said there were a few ignorant fish around who wouldn’t open their mouths.  They had hooked a fresh fish on Wednesday.  Howie Gould hooked a 42-incher on the weekend.  The water on the Northwest was low, but the Little Southwest Miramichi was a bit better.  Water temps had been good, but were starting to climb with the warmer days this week.  Norton was waiting for the Fall run, noting that the full-moon tides would be starting September 17.

Flies of choice were General Practitioners and White-tailed Green Machines.

So as we move toward mid September and the anticipated arrival of the Fall runs, it is time to get out and “on the water”.

Thought for the Week: “A fish story backed by visual evidence is something you don’t run into every day.”….Red Smith

DOAKTOWN – The Atlantic Salmon Museum will host the 33rd annual Hall of Fame Dinner and Ceremony at the Doaktown Curling Club (29 Prospect Street) on Saturday, October 1.
Beginning at 4:30 pm with a Meet n’ Mingle and followed by a buffet dinner and the induction ceremony itself, the evening promises to be a memorable one with a variety of silent, Chinese and live auctions, great food and, in particular, heartfelt tributes to six individuals whose lives have been intertwined with that of the Atlantic salmon.
This year we are delighted to honor:

Tickets for the October 1 Hall of Fame Dinner and Induction Ceremony are now on sale for $75 but with only a limited number available, it’s wise to reserve yours quickly.  For out-of-town guests, local accommodation is available at the following: 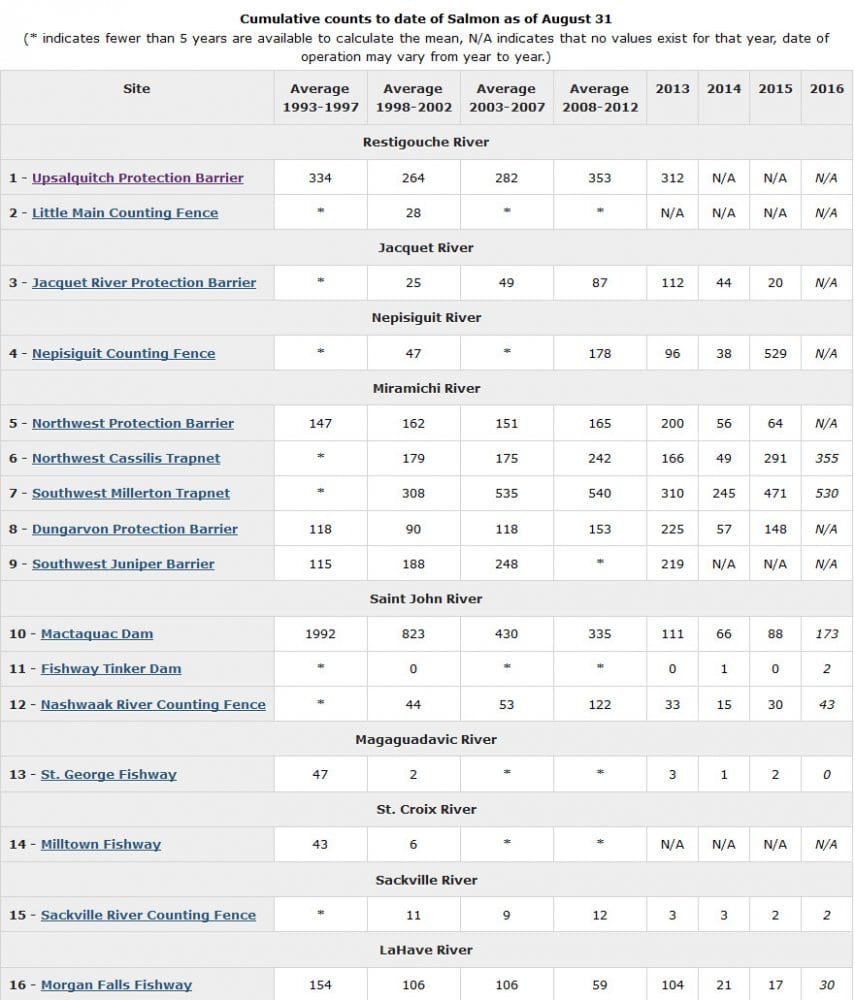 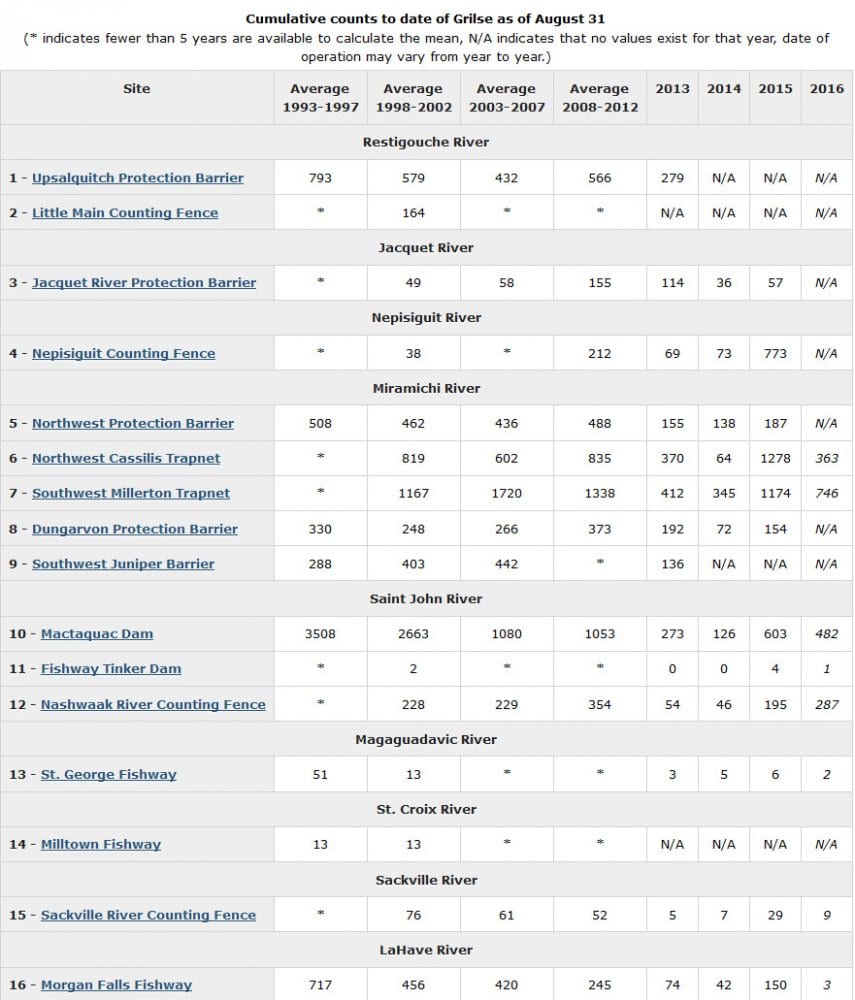